"We are not after a nuclear bomb ... Security of our neighbors is our security, too."

TEHRAN, Iran (AP) — Iran's foreign minister said Saturday that Tehran would be able to return to its nuclear activities if the West withdraws from a pact that is to be finalized in June.

Mohammad Javad Zarif, Iran's foreign minister and chief nuclear negotiator, said on a talk show on state-run TV that Iran has the power to take "corresponding action" and "will be able to return" its nuclear program to the same level if the other side fails to honor the agreement. 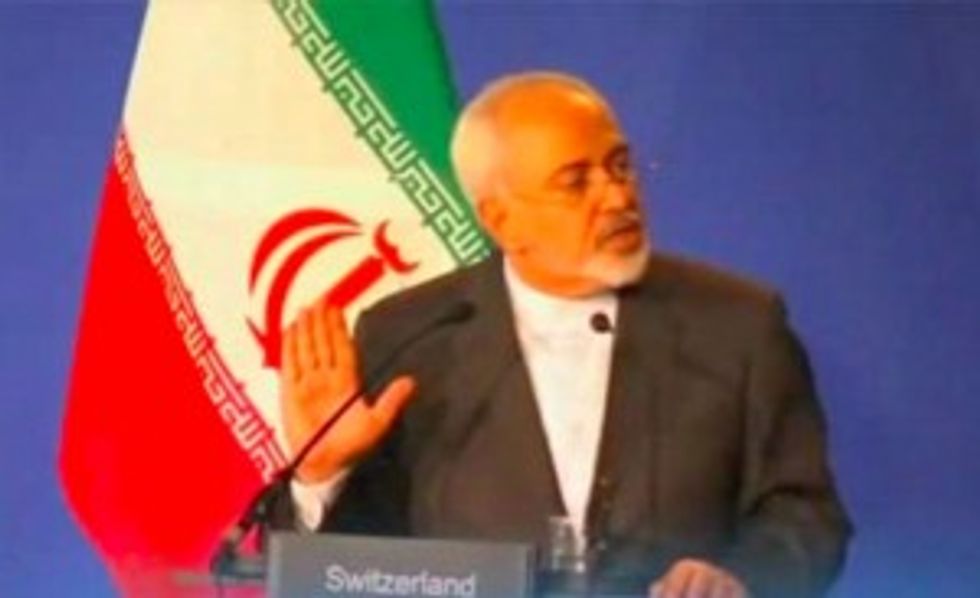 "All parties to the agreement can stop their actions (fulfillment of their commitments) in case of violation of the agreement by the other party," Zarif said.

Zarif said the framework nuclear deal announced by Iran and six world powers Thursday in Switzerland was not binding until a final agreement is worked out by a June 30 deadline. The framework agreement, if finalized, would cut significantly into Iran's bomb-capable nuclear technology while giving Tehran quick access to bank accounts, oil markets and other financial assets blocked by international sanctions.

Zarif said the deal, if finalized, would nullify all U.N. Security Council resolutions against Iran's nuclear program and lead to the lifting of U.S. and European Union sanctions.

Zarif's remarks appear aimed at reassuring hardliners in Iran who strongly oppose the framework agreement as a good deal for the West and disaster for Iran.

Despite criticism by hardliners, the deal has been overwhelmingly backed by Iran's establishment, including President Hassan Rouhani who pledged in a speech to the nation on Friday that Iran will abide by its commitments under the nuclear deal.

Zarif said Iran is "committed" to implementing its part of any final agreement providing Western countries fulfill their promises.

He said Iran wants to have a "moderate, constructive and proud presence" in the world.

Zarif received a hero's welcome upon his return to Tehran on Friday. Crowds of cheering supporters surrounded Zarif's vehicle and chanted slogans supporting him and Rouhani.

In the TV interview, Zarif said he "objected" to U.S. Secretary of State John Kerry using the word "suspension" rather than "termination" regarding sanctions against Iran in the statement on the framework deal announced Thursday in Lausanne, Switzerland.

[sharequote align="center"]"We are not after a nuclear bomb ... Security of our neighbors is our security, too."[/sharequote]

Zarif attributed Kerry's action as being aimed at addressing rifts between the Obama administration and Congress over the deal. Republicans are almost universally opposed to President Barack Obama's diplomatic effort; Democrats remain divided.

Without naming any country, Zarif assured Iran's neighbors such as Saudi Arabia which are concerned about Iran's nuclear ambitions that Tehran is not after regional domination.

"We are not after a nuclear bomb. We are also not after hegemony in the region, too," Zarif said. "Security of our neighbors is our security, too."

Saudi Arabia has expressed concern about growing Iranian influence in Iraq, Syria and Lebanon which have large Shiite Muslim populations. A Saudi-led military coalition is now carrying out airstrikes in Yemen against Shiite Houthi rebels who are supported by Iran.