Confused Joe Biden claims there's a border between Venezuela and Bolivia, which are 700 miles apart

Bolivia is pretty far from Venezuela

In an interview with the Des Moines Register, Joe Biden lamented the ongoing crisis in Venezuela. The 77 year-old former vice president described President Donald Trump's foreign policy toward the region as "irresponsible" to the newspaper's editorial board.

"Look what's going on in Venezuela right now...millions of people are crossing the border destabilizing Bolivia," he said.

There's only one problem: There is no border between Bolivia and Venezuela, two countries that are separated by 700 miles of Brazilian rain forests.

It's unclear which country Biden was referring to: while the situation in Venezuela has triggered a humanitarian crisis in the region, as the Washington Examiner noted, Peru and Colombia have absorbed most Venezuelan refugees, according to the Council on Foreign Relations. 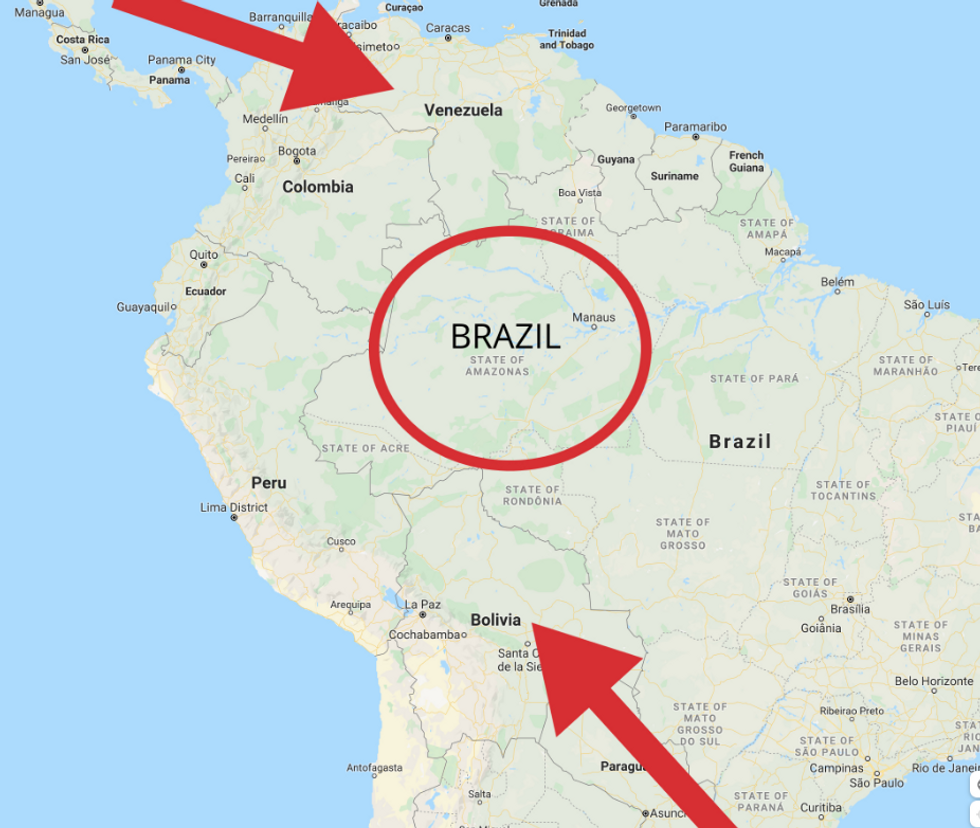 Tweeted by the Washington Examiner

The United Nations has reported that over 4 million Venezuelans have fled their country since it became a failed socialist state, resulting in one of the world's biggest recent displacement crises.

"There has been an 8,000 per cent increase in the number of Venezuelans seeking refugee status worldwide since 2014, principally in the Americas," the UN Refugee Agency said in a fact sheet.

No, the Obama administration did not 'stabilize' Venezuela

Biden's comments seem to imply that the situation in Venezuela was stable during his tenure as vice president, but facts show otherwise.

By early 2014, the country was in free fall as the economy was collapsing, violent gangs has seized control of cities, and hundreds of thousands of Venezuelans were forced to flee. CNN reported at the time:

Nationwide student protests started this month. On February 12, the demonstrations attracted global attention when three people were killed. Demonstrators are demanding better security, an end to goods shortages and protected freedom of speech. Major social and economic problems have fueled the protests. But as the demonstrations gained steam, officials have pointed fingers at other factors and accused the United States of plotting to destabilize the government.

In fact, the Obama-Biden Treasury Department imposed targeted sanctions aimed at a handful of Venezuelan officials.

Despite the limited sanctions, the Obama administration was heavily criticized for largely ignoring Venezuela. As the Washington Post's Jackson Diehl has noted, one of the byproducts of the former president's opening toward Cuba was that it took its eye off the crisis in Venezuela, a major ally and sponsor of the communist regime in Havana.

"Oddly, the only discernible policy the Obama administration has toward this unfolding implosion [in Veneuzlea] is the one it just repudiated for Cuba: sanctions," Diehl wrote in January 2015.

"Now the region's big governments, like the White House, focus on the political rehabilitation of Cuba while ignoring the situation in Caracas," he added.