"You don't know who they are. They could be your neighbors."

GARISSA, Kenya (AP) — One of the gunmen who slaughtered 148 people at a college in Kenya was identified Sunday as the law school-educated son of a Kenyan government official, underscoring the inroads Islamic extremists have made in recruiting young people to carry out attacks against their own country.

Abdirahim Mohammed Abdullahi, who was killed by security forces Thursday along with the three other militants who stormed Garissa University College, was the son of a government chief in Mandera County, which borders Somalia, Interior Ministry spokesman Mwenda Njoka told The Associated Press.

The chief had reported his son missing last year and feared he had gone to Somalia, Njoka said.

Somalia's al-Shabab militant group claimed responsibility for the bloodbath, saying it was retribution for Kenya's sending of troops to Somalia to fight the extremists. The attackers separated Christian students from Muslim ones and massacred the Christians.

The news that one of the gunmen was Kenyan highlights the challenges faced by the government in preventing terrorist attacks. The danger comes not only from neighboring Somalia but also from within Kenya. 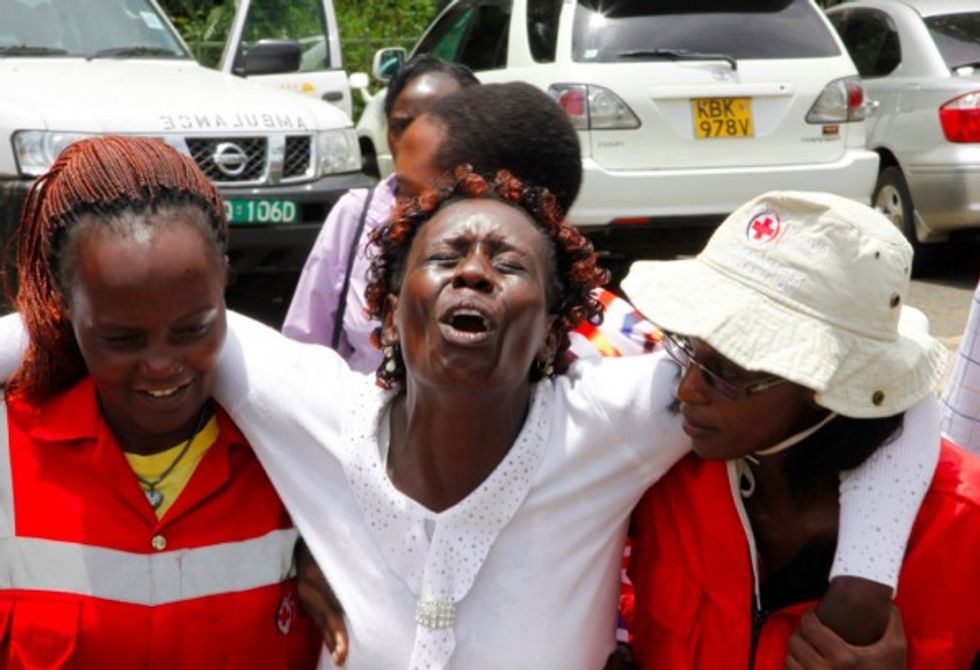 Red Cross staff console a woman after she viewed the body of a relative killed in Thursday's attack on a university, at Chiromo funeral home, Nairobi, Kenya, Sunday, April 5, 2015. (Image source: AP/Khalil Senosi)

Kenyans make up the largest number of foreign fighters in al-Shabab, according to experts. Hundreds of Kenyan youths have trained with al-Shabab and then returned to Kenya, posing a major security threat, according to former police chief Mathew Iteere.

Kenya's government has said another source of instability is the country's refugee camps, with more than 423,000 Somali refugees.

Abdullahi graduated from the University of Nairobi with a law degree in 2013 and was seen as a "brilliant upcoming lawyer," according to Njoka.

Njoka said it is important for parents to inform authorities if their children disappear or seem to be embracing extremism.

Meanwhile, questions have been raised about the security response to the Garissa attack.

When the specially trained police finally went in, it took them only 30 minutes to kill the four attackers and stop the siege, the paper said.

Army barracks are just 540 yards from the college, and military officers said they could handle the attack, said a police officer who spoke on condition of anonymity because he was not authorized to talk to the media. Only after three soldiers were killed did the army call in the police tactical unit, he said.

Before the massacre, northeastern Kenya had seen other deadly attacks by al-Shabab against Christians.

Several hundred grieving Christians marked Easter Sunday at a Catholic church in Garissa, where Bishop Joseph Alessandro drew a parallel between the ordeal of Jesus Christ and that of the stricken town.

As for al-Shabab's followers, Alessandro said, "You don't know who they are. They could be your neighbors."

Security forces patrolled the perimeter of the church, the site of a grenade attack by militants three years ago that wounded worshipers.

"We just keep on praying that God can help us, to comfort us in this difficult time," said Dominick Odhiambo, a worshipper who said he planned to abandon his job as a plumber in Garissa and leave for his hometown because he was afraid.

Odula contributed to this report from Nairobi, Kenya.