"The good news so far is that water quality does restore itself."

Cement Creek, which is a tributary of the Animas River was flooded with millions of gallons of mining wastewater, is viewed on August 11, 2015 in Silverton, Colorado. (Photo by Theo Stroomer/Getty Images)
Liz Klimas

A week after the Animas River in Colorado turned mustard yellow as 3 million gallons of wastewater contaminated with toxic, heavy metals poured from an inactive mine, U.S. Environmental Protection Agency Administrator Gina McCarthy was onsite and said that water quality in one of the counties affected by the spill was back to pre-event levels.

"I want to reassure everybody one of the reasons for my being here is to let everyone know that the EPA does take full responsibility for this incident," McCarthy said at a Wednesday afternoon news conference.

On August 5, contractors working for the EPA were evaluating the Gold King Mine near Silverton, Colorado, assessing the rate of water release, treatment of mine water and future remediation of the site. While excavating loose material, the workers accidentally created a hole, spilling even more contaminated water into Cement Creek, a tributary of the Animas. The plume stretched into the Animas running in New Mexico and the San Juan River in Utah.

Seven days later the color is now gone, but contaminated water is still seeping from the inactive mine at a rate of about 213 gallons per minute, which the EPA said is at pre-spill levels.

McCarthy announced that water samples taken from the Animas River on Aug 7, 8 ,9, in La Plata County showed that the levels have "returned to pre-event conditions."

“The good news so far is that water quality does restore itself to its prior conditions,” she said.

Tests further down river are still ongoing. As for how the incident itself happened, the EPA is conducting its own investigation and will be having an independent investigation as well.

McCarthy said the EPA’s regional offices have been alerted to look at their own assessment work and similar cleanup efforts to make sure there is not a potential for a release like that seen from Gold King Mine.

The EPA has been criticized for a lack of communication in the days that followed the spill, with some groups saying they plan to sue. Colorado Attorney General Cynthia Coffman told the Denver Post that a lawsuit is "certainly on the table.” Coffman and the attorney generals from Utah and New Mexico were meeting Wednsday afternoon.

The EPA has said the flows are moving too fast for the contaminants to pose an immediate health threat and that the heavy metals will likely be diluted over time so they don't pose a longer-term threat. As of Monday, there had been no reports of widespread fish deaths associated with the spill. Of the 108 fish placed in underwater cages during the worst of the spill, only one died. It's unknown whether the death stemmed from pollution or other reasons.

The New Mexico Department of Game and Fish's biologist evaluating the situation, according to the EPA, reported finding birds with some stains, but said they were still able to fly and would not require rehabilitation. 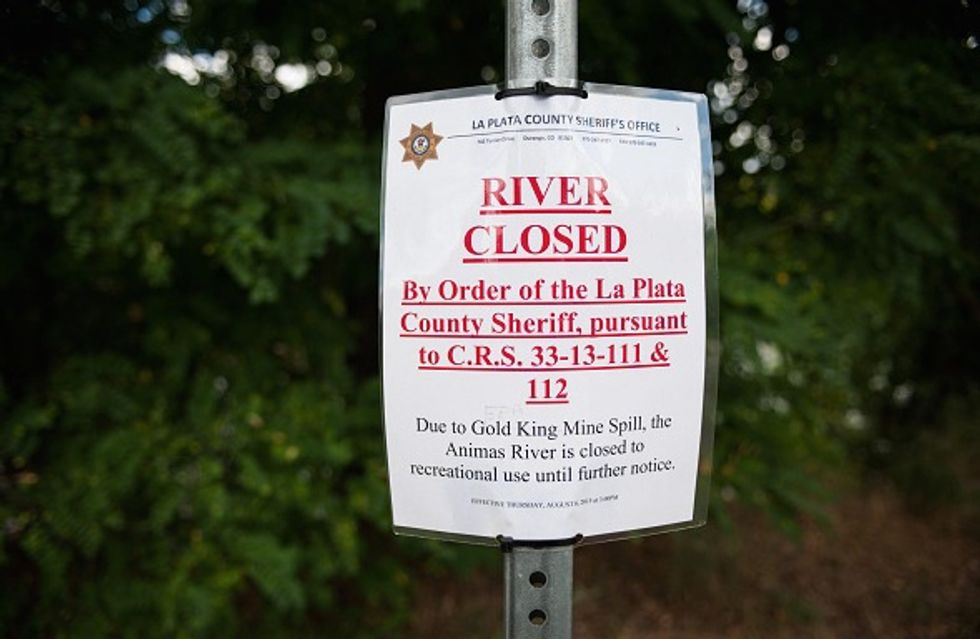 A sign is posted near the Animas River on August 11, 2015 in Durango, Colorado. The Environmental Protection Agency accidentally released an estimated 3 million gallons of wastewater from the Gold King mine into the Animas last week. (Theo Stroomer/Getty Images)

However, local and tribal officials are concerned about river sediment being contaminated and the potential for long-term effects.

Russell Begaye, president of the Navajo Nation, expressed worry for the farmers whose 30,000 acres of crops are in danger without irrigation, and the ranchers scrambling to keep their cattle, sheep and goats away from the polluted San Juan River. 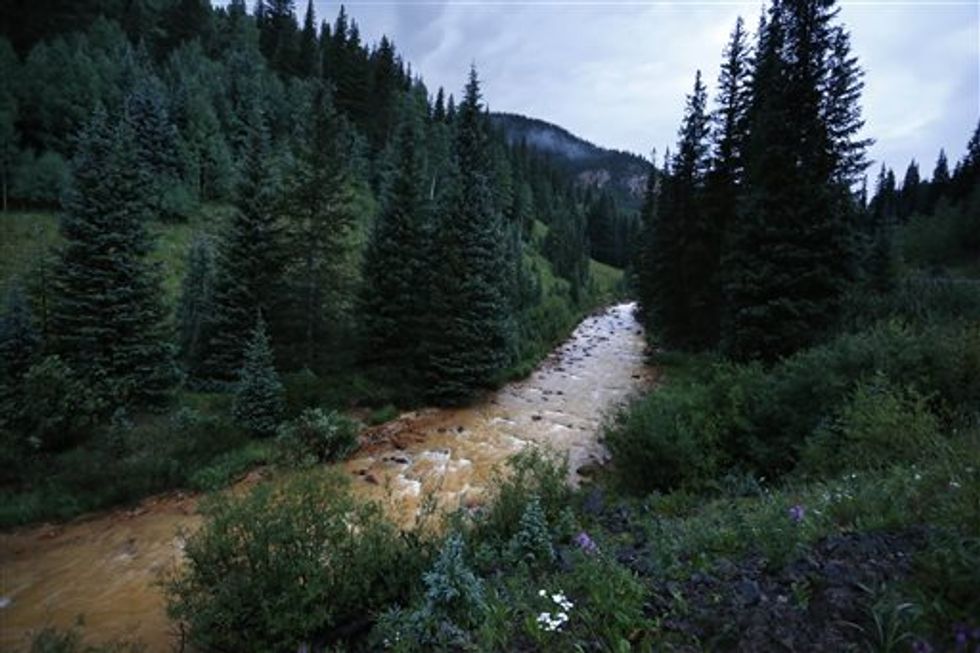 The water of the Cement Creek flows down a valley a few miles downstream from the Gold King mine, where a wastewater accident several days earlier has raised alarm, outside Silverton, Colo., Wednesday, Aug. 12, 2015. The Environmental Protection Agency has taken full responsibility for the mine waste spoiling rivers downstream from Silverton, but people who live near the idled and leaking Gold King mine say local authorities and mining companies spent decades spurning federal cleanup help. (AP/Brennan Linsley)

"When EPA is saying to me it's going to take decades to clean this up, that is how long uncertainty will exist as we drink the water, as we farm the land, as we put our livestock out there near the river," he said. "That is just, to me, a disaster of a huge proportion."

EPA Administrator Gina McCarthy, who is visiting Colorado Wednesday, said Tuesday that the "EPA is taking responsibility to ensure that it is cleaned up." 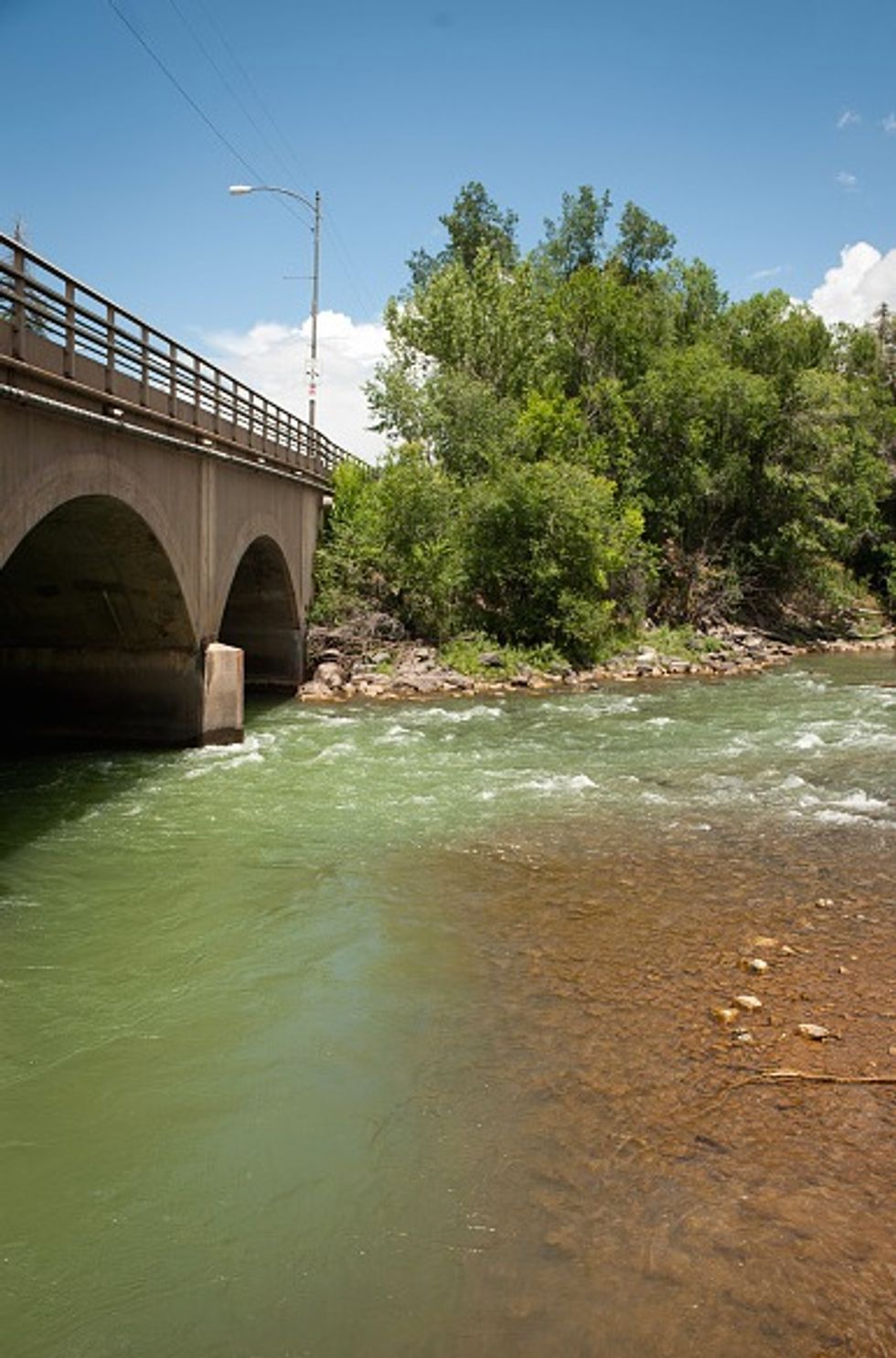 The Animas River is pictured on August 11, 2015 in Durango, Colorado. The Environmental Protection Agency accidentally released approximately three million gallons of wastewater into the river from the Gold King mine last week. (Theo Stroomer/Getty Images)

Calling it a "tragic and unfortunate incident," McCarthy said the agency's researchers and scientists were working "around the clock" to analyze data to assess the impact on environmental and human health.

At this time, in addition to assessments, the EPA said it is capturing and treating water still coming out of the mine in ponds before sending it into Cement Creek, which it said appears to be effective. 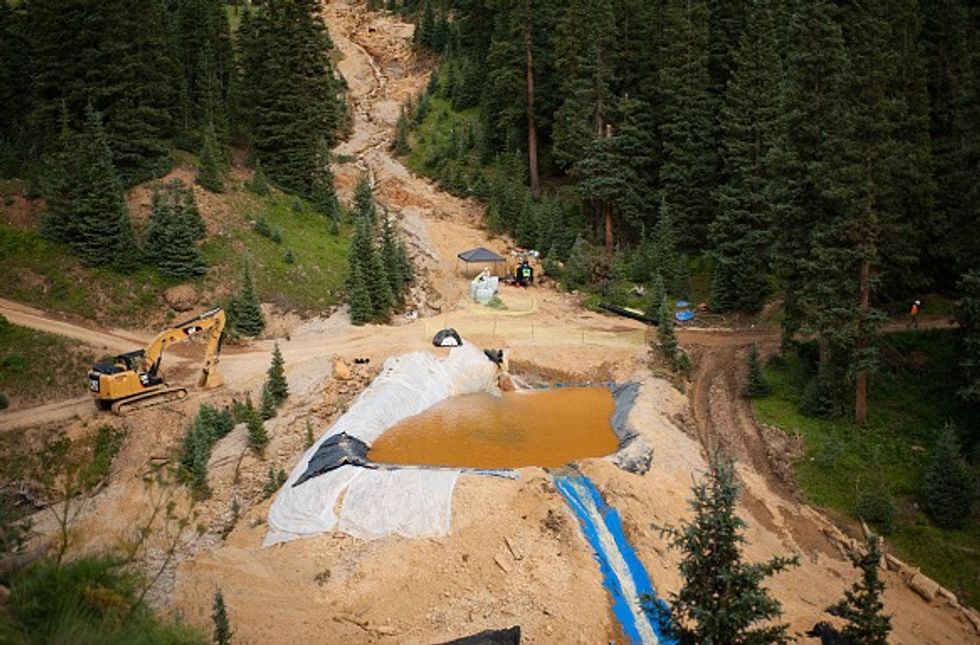 "We are raising the pH (acidity) of the water with the addition of lime and sodium hydroxide solution to facilitate sedimentation of the metals in the ponds," it stated. "We are adding flocculant agents (used in water treatment processes to improve the sedimentation or filterability of small particles) to increase the amount of sedimentation. The treated water that is being discharged to Cement Creek has a pH of 5.5."

The EPA is encouraging those who face expenses due to the spill to keep records of their costs and submit a claim, while state and county officials have estimated that they'll be submitting claims in the millions of dollars to the agency.

Briefly addressing the claims during Wednesday’s news conference, McCarthy said the agency would be following the federal government’s process for responding to them.