NEW YORK, NY - AUGUST 17: Republican Presidential hopeful Donald Trump gives the thumbs up as he arrives at U.S. Federal Court to report for jury duty on August 17, 2015 in New York City. Trump spent the last few days on the campaign trail at the Iowa state fair before returning to New York to perform the civic duty. (Photo by Andrew Burton/Getty Images)
TheBlaze Staff

Trump shook hands and fist-bumped bystanders as he reported for jury duty at a Manhattan court, arriving in a limousine.

"The wall will work," he declared Monday when a passer-by at the courthouse asked about an element of his immigration platform: making Mexico pay for a permanent border wall.

Surrounded by a crush of cameras and reporters as he walked up the courthouse steps, Trump waited in a security line before going to the jury room, where a murmur arose from the roughly 75 potential jurors gathered when he entered and an officer shook his hand. A court officer escorted him to a seat in the front row.

Accompanied by what appeared to be a security guard and an aide, he arrived in time to catch the end of an instructional video about jury duty basics, and he filled out a juror questionnaire asking about biographical basics, occupation, hobbies, experiences with crime and courts and whether the prospective juror is "actively involved in any civil, social, union, professional or other organizations."

Jury assembly supervisor Irene Laracuenta told the possible jurors that their commitment would be either one day or one civil trial, depending on whether they were selected.

"No one - no one - gets special treatment," Laracuenta said. 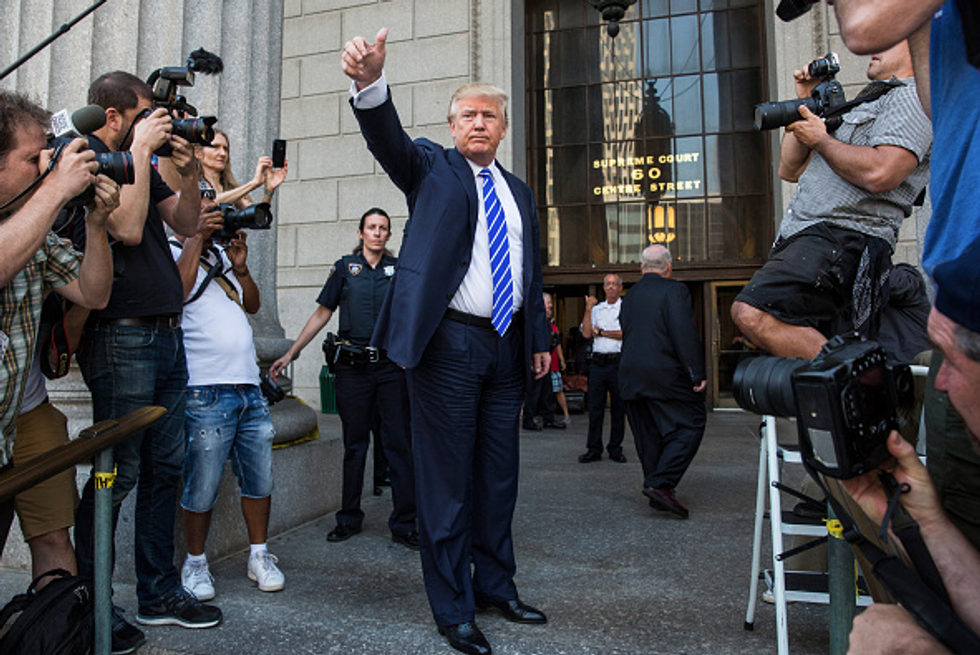 Republican presidential hopeful Donald Trump gives the thumbs-up as he arrives at a Manhattan court to report for jury duty, Aug. 17, 2015 in New York City. (Photo by Andrew Burton/Getty Images)

If Trump isn't picked for a jury by the end of Monday, he's exempt from jury duty for the next six years. Jurors who do get chosen are told to expect to sit for at least one week, but trials can last for months.

The GOP front-runner said last week he was "looking forward to appearing" for jury duty. The real estate mogul and reality TV star has been called previously but didn't appear; a spokesman has said Trump never got the summonses because they had been sent to the wrong address.

Over the years, many celebrities have been called for jury duty in New York City. They include Madonna, Spike Lee, and Woody Allen. Former mayors Michael Bloomberg and Rudolph Giuliani both were called while in office; Giuliani actually served as foreman on a civil personal-injury case. Former President Bill Clinton was seriously considered, though he didn't actually have to appear, for an attempted murder case in Manhattan federal court in 2003.