"Today is a new starting point."

CATONSVILLE, Md. (AP) -- President Barack Obama sought Wednesday to correct what he called a "hugely distorted impression" of Muslim-Americans as he made his first visit to a U.S. mosque. He said those who demonize all Muslims for the acts of a few are playing into extremists' hands. 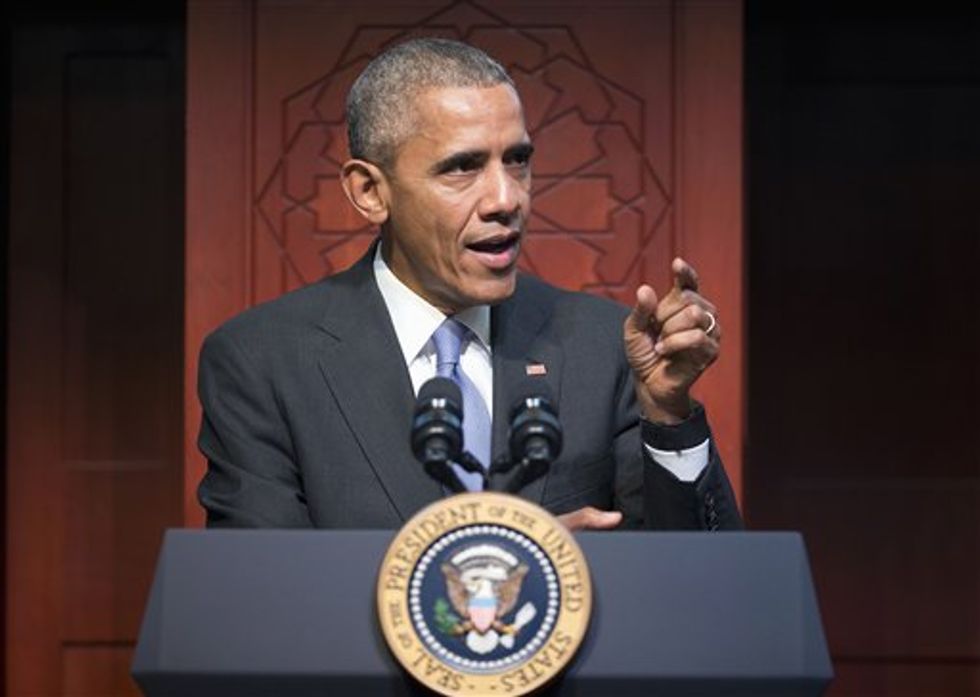 President Barack Obama speaks to members of the Muslim-American community at the Islamic Society of Baltimore, Wednesday, Feb. 3, 2016, in Baltimore, Md. Obama is making his first visit to a U.S. mosque at a time Muslim-Americans say they're confronting increasing levels of bias in speech and deeds.(AP Photo/Pablo Martinez Monsivais)

Inserting himself into a debate that has ricocheted in the presidential campaign, Obama told parishioners at a mosque outside Baltimore that he'd heard from young Muslims worried they'll be rounded up and kicked out of the country. He said Muslims, too, are concerned about the threat of terrorism but are too often blamed as a group "for the violent acts of the very few."

"We've seen children bullied, we've seen mosques vandalized," Obama said, warning that such unequal treatment for certain groups in society tears at the nation's fabric. "That's not who we are."

For Muslim advocates, Obama's visit was a long-awaited gesture to a community that has warned of escalating vitriol against them that has accompanied the public's concern about the Islamic State and other extremist groups. Although Obama has visited mosques overseas, he waited until his final year in office to make such a visit at home, reflecting the issue's sensitive political implications.

In this year's Republican presidential campaign, Donald Trump has called for banning Muslims from the U.S. temporarily and Ted Cruz and Marco Rubio warned of "radical Islamic terrorism." Muslim-American advocacy groups have warned of growing antagonism that has followed recent attacks in Paris and San Bernardino, California, by those purporting to act in the name of Islam.

"We have to understand: An attack on one faith is an attack on all our faiths," Obama said. He said it fell on all Americans to speak up.

For Obama, the visit reflected a willingness to wade into touchy social issues that often eluded him earlier in his presidency. For years, Obama has fought incorrect claims that he's actually a Muslim and was born in Kenya, beliefs that polls suggest remain prevalent among many Republicans. Obama, a Christian, was born in Hawaii.

Obama, acknowledging that uncomfortable chapter in his own story, noted that Thomas Jefferson had also been accused of being a Muslim.

"So I was not the first," Obama said to laughter from a hundred or so Muslims who gathered for his speech. "No, it's true. Look it up."

Obama challenged Hollywood to start casting Muslims in roles "that are unrelated to national security." Drawing a parallel with African-Americans' struggle for broad societal acceptance, he noted, "there was a time when there were no black people on television."

With no plans to ever again appear on a ballot, Obama faces less pressure to avoid political controversy, and seemed to relish the possibility that his visit would raise eyebrows among some of his most entrenched critics. Ahead of his visit, White House officials acknowledged the visit could spark controversy but suggested that would help make his point about ignorance and religious bias.

Still, the president was pointed in acknowledging that concerns about violence emanating from some corners of the Islamic world were not ill-founded. He denounced what he called an "organized extremist element" twisting selective Islamic tests in a way that ends up reflecting negatively on the overwhelming majority of law-abiding Muslims.

"It is undeniable that a small fraction of Muslims propagate a perverted interpretation of Islam. This is the truth," Obama said. He added, "It's real. It's there."

But Obama said suggestions that Islam is at the root of the problem only play into terrorist propaganda, weakening U.S. national security as opposed to strengthening it. He said IS and other extremist groups are desperately working to legitimize themselves by masquerading as religious leaders and holy warriors.

"We must never give them that legitimacy. They're not defending Islam," Obama said. "The vast majority of the people they kill are innocent Muslim men, women and children."

Ahead of his speech at the suburban Islamic Society of Baltimore, Obama met around a large table with Muslim university chaplains, community activists and public health to discuss religious tolerance and freedom. Among the participants was fencer Ibtihaj Muhamma. The White House said she'll make history at the Rio de Janeiro 2016 Olympic Games as the first United States Olympian to compete in a hijab.

Nearly half of Americans think at least some U.S. Muslims are anti-American, according to a new Pew Research Center poll released Wednesday. Two-thirds of Americans said people, not religious teachings, are to blame when violence is committed in the name of faith. However, when respondents were asked which religion they consider troubling, Islam was the most common answer.

"We never thought that when we held our first prayers in the small room nearly a half a century ago that we would be hosting the president," said Muhammad Jameel, the mosque's president. "Today is a new starting point. It is also a continuing journey - a journey steeped in American history and tradition."