American flag mural, painted the day after 9/11, defaced with profane, anti-Trump graffiti. But two cops and a kid come to the rescue.

'I put my life on the line for that flag'

An American flag mural began greeting Phoenix motorists and pedestrians near the intersection of 40th Street and Cactus Road the day after the September 11, 2001, terrorist attacks, the Arizona Republic reported. 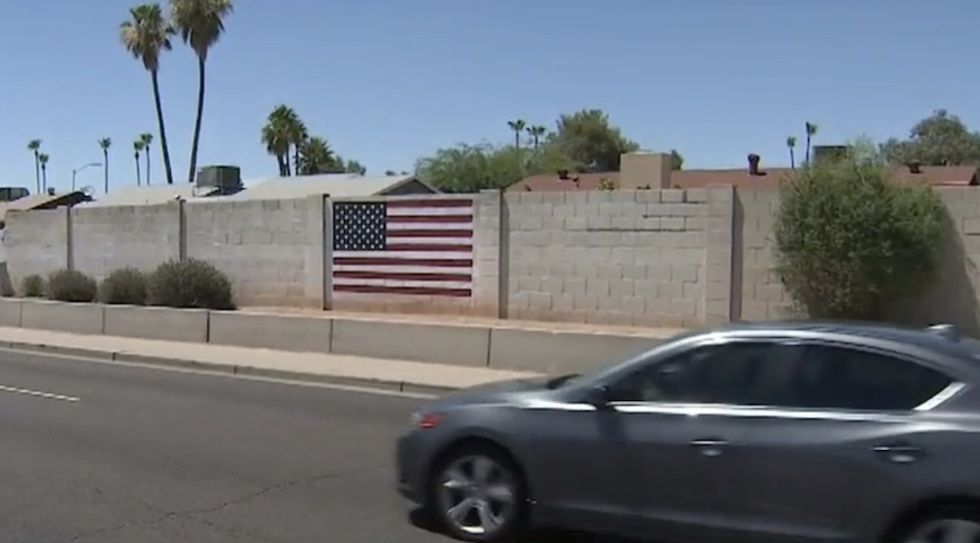 The mural was painted on a home's wall, and the former homeowner Laura Giacoppo painted it with her son Brian and friend Patti, the paper said.

"It was just a thing that we did to honor all the people who died," she added to the Republic.

But Mimi Hanna, who now owns the property, told KSAZ-TV she felt "violated" upon getting word that the flag mural had been defaced with the phrases, "F*** Trump!!! F*** ICE!!," directed at President Donald Trump and U.S. Immigration and Customs Enforcement.

David Bishop has lived in neighborhood for six years and told the station that he drives by the flag mural "every day" and that it "really makes me feel sad that someone would do that."

But the emotions run just a little deeper for Bishop, who's also a Vietnam veteran added to KSAZ that what he and other vets sacrificed makes the flag mural vandalism a slap in the face.

"I put my life on the line for that flag," he added to the station. "Coming from Vietnam, we had a bad rep when we came back, so we really had to work on that to build up to where we are respected again."

Two cops to the rescue

But on Thursday residents noticed a pair of Phoenix police officers re-painting the flag — and were understandably thrilled, KSAZ said.

"I was touched that they would be standing out there in 105-degree weather painting this flag," neighborhood resident Marcy Bobbitt told the Republic.

The cops who came to the rescue are Officer Mario Lozoya and Sgt. Matt Morgan — and they got some help from Lozoya's son, the paper added.

"I respect them so much," Hanna added to the Republic. "I respect law and order, and I was very touched."


"You have to have respect for it," Bishop added to the station. "It's this country. It's what we all live for. It's freedom, and deface the flag, you are disgracing freedom."