Clinton's Health: All Fun and Games Until the FBI Finds Coincidence

Some say Hillary Clinton's cough is her "new Benghazi" -- and rightly so, given the FBI's latest statement that suggests a link between her memory loss and her head injury.

Once upon a time, a brash, bold-faced candidate called Hillary Clinton thought she’d take a seat in the back of the campaign room, collect donor dollars, and adopt a wait-and-see plan as her platform to the presidency, her sole strategy seeming: Donald Trump is a circus act and well – who ya gonna vote for, except me?

Her strategy was underscored by her 18 months-plus of dodging press conferences, and by her near-disappearance from the public campaign trails in August, in favor of private fundraisers.

Then came this, from the pundit and media class: What’s up with all her coughing during public speeches?

And this, from the medical community, the latest of which included Dr. Drew: Her brain is malfunctioning due to past injury, and she ought to get a neurological exam to prove fitness for the presidency. 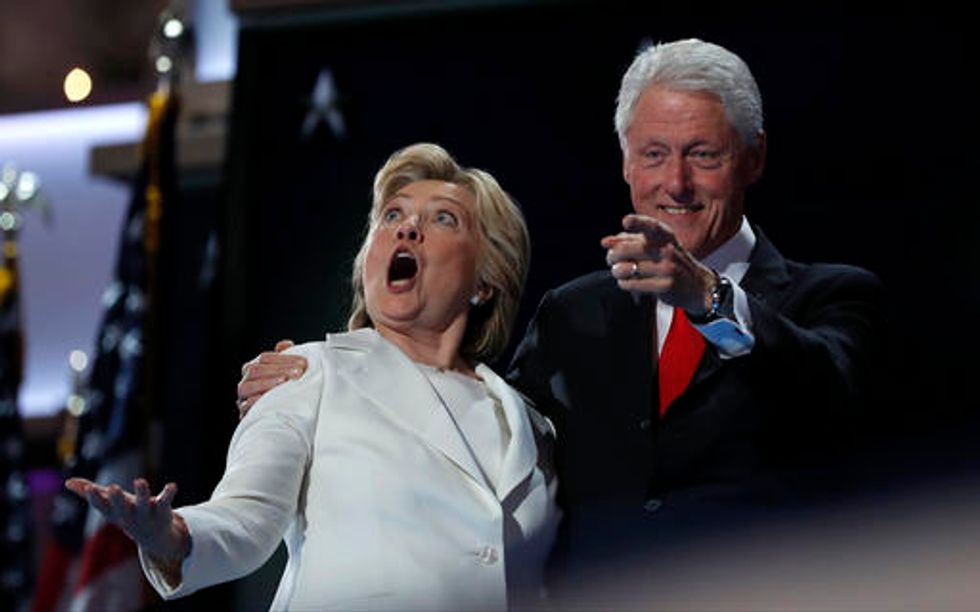 And then this, perhaps most damning: The FBI itself reported a tie between Clinton’s memory lapses and her prior concussion.

In the course of investigating Clinton’s long-running email scandal, and in the course of asking the former secretary of state to explain her take on the many briefings she attended while serving President Barack Obama’s administration that spelled out just how agents of government ought to handle classified information and public documents – queries she addressed by saying she didn’t remember -- the FBI, inadvertently but no less shockingly, drew a direct parallel between her brain injury and her inability to lead.

“In December of 2012,” the FBI wrote, in summary of interrogations of Clinton over her use of a private, home-based email server for secretary of state business, Reuters reported, “Clinton suffered a concussion and then around the New Year had a blood clot. Based on her doctor’s advice, she could only work at State for a few hours a day and could not recall every briefing she received.”

While the FBI didn’t specifically say Clinton’s memory fails were due to her brain injury, the link speaks volumes. And when combined with other health-related snafus on the campaign trail, the question of her presidency has undergone a dramatic shift. No longer are Americans wondering which candidate, Clinton or Trump, would provide the best security, open the doors to the most vibrant economy, pave the way for the most sound and logical border plan. But rather the focus becomes: Will Hillary make it through the day without a visit to the hospital?

Clinton’s campaign has become like a NASCAR race – one boring lap after another, while waiting to see if there’s a crash and burn.

The New York Post ran this headline, in January: “Hillary Clinton Can’t Stop Coughing During Speech,” in reference to her address before Iowa supporters.

In mid-February, it was this from the Conservative Outfitters: “Hillary Clinton Suffers From Another Severe Coughing Fit While Speaking in NYC.”

In April, Clinton suffered yet another bout of coughing during an interview with a radio station host, after which she pointed to the “allergy season” as the blame. In May, it was more of the same – this time, as the Washington Free Beacon reported – during a California campaign event.

“On June 4,” the American Mirror reported, “Clinton was [simply] listening during a round table discussion when she began hacking uncontrollably.”

Now this latest, another spasm of coughing just this week in Ohio – and videos are making the rounds.

As the Daily Beast opined: “Is Hillary Clinton’s Cough the New Benghazi?”

It’s actually a valid question – and one, like Benghazi and the death of four Americans on Mrs. Clinton’s watch, the mainstream media hates to ask. CNN even has a name for those who question Mrs. Clinton’s physical ability to hold the high office – “healthers,” a play on the “birthers” who doubted Obama’s constitutional right to the presidency.

But the facts remain: Clinton suffered a concussion in 2012. She was shortly after hospitalized for a blood clot in her head. She can’t remember key details of her own government briefings, according to the FBI. And now, her campaign trail is marked by one curious coughing fit after another. Her supporters may scoff, but the reality remains: A president who can’t speak, is going to be hard pressed with diplomacy. A president who isn’t healthy, especially in brain and in head, sets an uncertain White House tone and therefore, puts the fate of the nation at risk.

Cheryl Chumley, a writer, speaker and journalist, is the author of the 2016 release, “The Devil in D.C.: Winning Back the Country From the Beast in Washington,” available now on Amazon, and of “Police State USA: How Orwell’s Nightmare Is Becoming Our Reality.” She may be reached at ckchumley@outlook.com or through her blog, cherylchumley.blogspot.com, or at Twitter @ckchumley.