In Defense of Kaepernick's Castro Caper

While denouncing “injustices against people of color” Kaepernick idolized the jailer and torturer of the longest suffering black political prisoners in the modern history of the Western hemisphere.

“I’m going to continue to stand with the people that are being oppressed. There is police brutality. People of color have been targeted by police…There’s people being murdered unjustly and not being held accountable.” Colin Kaepernick

While proclaiming the sentiments above Colin Kaepernick wore a T-shirt showing Fidel Castro. If Kaepernick were starring in a "Monty Python" or "Saturday Night Live" skit we’d get it. If he was starring in a "Twilight Zone" or "Alice in Wonderland" remake we’d understand.

But the shirt did not seem to denote any sentiments satiric or surreal.

Instead, while denouncing oppression, Kaepernick chose to idolize a Stalinist dictator who jailed and tortured political prisoners at a higher rate than Joseph Stalin himself during the Great Terror. 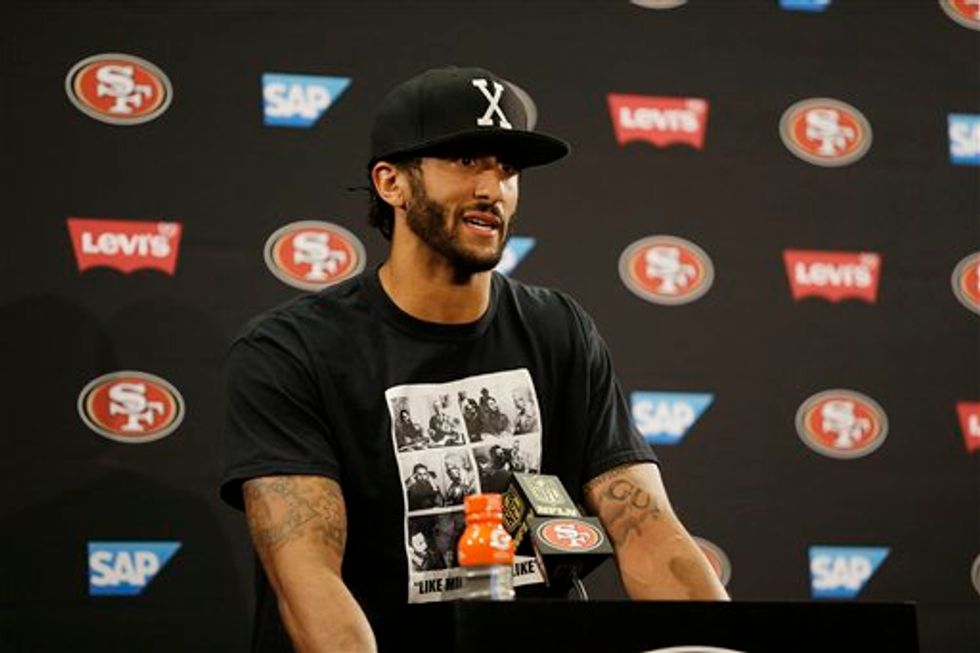 While denouncing “police murders,” Kaepernick idolized a dictator whose KGB-trained police and death squads murdered more Cubans in his first three years in power than Adolf Hitler murdered Germans during his first six.

While denouncing “injustices against people of color,” Kaepernick idolized the jailer and torturer of the longest suffering black political prisoners in the modern history of the Western hemisphere. Many of these black Cubans suffered longer and more horrible incarceration in Castro’s KGB-designed dungeons than Nelson Mandela spent in South Africa’s prisons, which were open to inspection by the Red Cross. Castro has never allowed a Red Cross delegation anywhere near his real prisons.

"'N**ger!' taunted my jailers between tortures,” recalled the late Cuban political prisoner Eusebio Peñalver to me. “We pulled you down from the trees and cut off your tail!' laughed my torturers. For months I was naked in a six by four foot cell. That’s four feet high, so you couldn’t stand. But I felt a great freedom inside myself. I refused to commit spiritual suicide.”

Naturally you’ve never heard of Eusebio Peñalver, or of any of his black Cuban co-heroes like Ignacio Cuesta Valle, Antonio López Muñoz, and Dasio Hernández Peña who all suffered prison terms longer than did Nelson Mandela.

And yet their suffering took place only 90 miles from U.S. shores in a locale absolutely lousy with international press bureaus and their intrepid “investigative reporters.” From CNN to NBC, from Reuters to the AP, from ABC to NPR to CBS, Castro welcomes all of these to “embed” and “report” from his fiefdom. For all the good it does when it comes to reporting truth.

In spite of Kaepernick’s imbecilities, his publicity agent (in the extremely unlikely event that he’s any better educated on Cuban matters than his client) could have a ball with some of the complaints against Kaepernick.

“The campaign of calumny and vituperation against my client for wearing a Fidel Castro t-shirt, this unmerited barrage of hate and bigotry--clearly dramatize the racism that still pervades the elite U.S. establishment! Let’s look at this racist hypocrisy,” the PR flack could start.

“The record clearly shows that when Fidel Castro visited New York in 1996 the elite establishment hailed him as a rock star! 'The Toast of Manhattan!' crowed Time magazine about Castro’s reception by Manhattan’s beautiful people. 'The Hottest Ticket in Manhattan!' read a Newsweek story that week, referring to the social swirl that engulfed Castro," the PR flack would continue.

“After Castro’s whooping, hollering, foot-stomping ovation in the United Nation'ss General Assembly, he was feted by the New York’s best and brightest, hob-knobbing with dozens of Manhattan’s glitterati, pundits and power brokers," they'd add.

“First, there was dinner at the Council of Foreign Relations. After holding court there for a rapt David Rockefeller along with Robert McNamara, Dwayne Andreas and Random House’s Harold Evans, Castro flashed over to Mort Zuckerman’s Fifth Avenue pad, where a throng of Beltway glitterati, including a breathless Mike Wallace, Peter Jennings, Tina Brown, Bernard Shaw and Barbara Walters all jostled for brief tryst, cooing and gurgling to Castro’s every comment. All clamored for autographs and photo-ops. Diane Sawyer was so overcome in the mass-killer’s presence that she rushed up, broke into that toothy smile of hers, wrapped her arms around Castro and smooched him warmly on the cheek," they'd say.

"You people are the cream of the crop!" beamed the terror-sponsoring mass-murderer to the smiling throng that surrounded him.

"Hear-hear!" chirped the delighted guests while tinkling their wine glasses in appreciation and glee.

“Not to be outdone, the Wall Street Journal held a luncheon in honor of the Stalinist who burglarized every U.S. businessman in Cuba, tortured and murdered the few who resisted, abolished private property--and craved to nuke the city hosting their headquarters.

“And Fidel Castro had barely scratched the surface of his New York fan club. According to the U.S.-Cuba Trade and Economic Council, on that visit, Castro received 250 dinner invitations from Manhattan celebrities and power-brokers,” they'd conclude.

So let’s be fair: regarding veneration of Fidel Castro, why pick on Colin Kaepernick? Among U.S. millionaire celebrities, he has plenty of company.