Syria 'No-Fly Zone' is a Backdoor to War

The trouble is that a no-fly zone is not the passive, peacekeeping mission its supporters typically describe. It is not a simple time-out but a subtle step interventionists can take toward a new war of choice without triggering meaningful debate.

In this photo released by the Syrian official news agency SANA, Syrian security forces, emergency services and residents look at the remains of burned vehicles at the site of a bombing in Tartus, Syria, Monday, Sept. 5, 2016. Syrian state media reported that multiple bomb blasts have struck government and military targets around the country. (SANA via AP)
Contributor

Faced with a bloated federal budget, swelling national debt, extensive overseas military commitments, and a war-weary public, what’s a politician who wants a new war to do?

Propose a no-fly zone, of course.

This politicking tactic is as popular on both sides of the aisle as it is convenient, allowing no-fly zone advocates to deceptively paint themselves as at once proactive and restrained. After all, a NFZ seems like much less of a commitment than ground war or even airstrikes—while simultaneously offering the United States a way to demonstrate its serious displeasure with a dictator or uprising. The very name suggests a simple, hands-off operation, a necessity to protect the innocent. 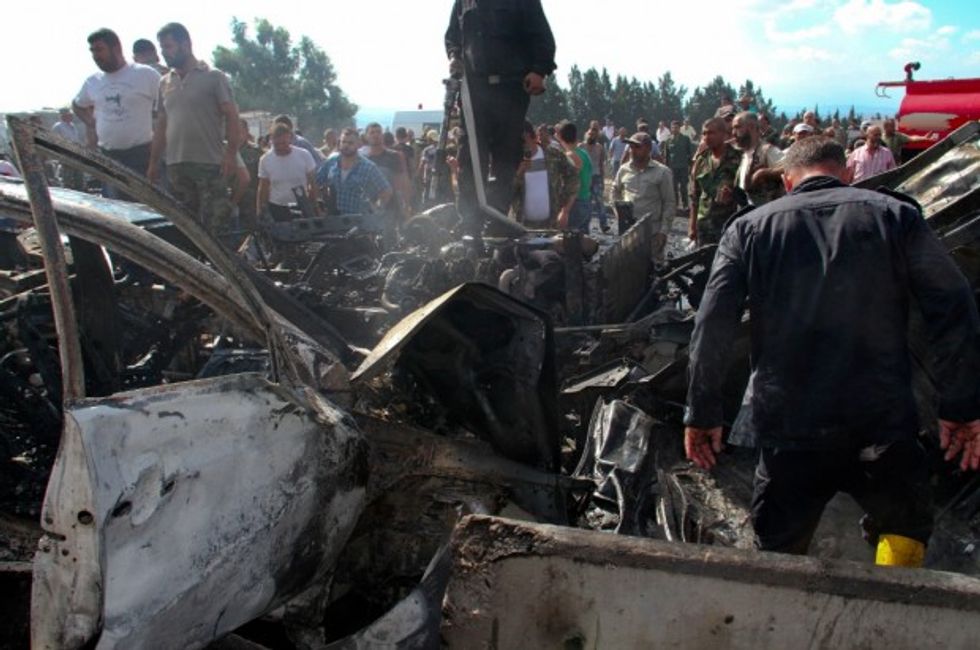 In this photo released by the Syrian official news agency SANA, Syrian security forces, emergency services and residents look at the remains of burned vehicles at the site of a bombing in Tartus, Syria, Monday, Sept. 5, 2016. Syrian state media reported that multiple bomb blasts have struck government and military targets around the country. (SANA via AP)

The trouble is that a no-fly zone is not the passive, peacekeeping mission its supporters typically describe. It is not a simple time-out but a subtle step interventionists can take toward a new war of choice without triggering meaningful debate or constitutional limitations. For though imposing control over another nation’s airspace is arguably an act of war—and thus should be prefaced by the congressional approval for war the Constitution requires—it is sold to the public as a far lesser act, even an act of benevolence.

Yet if there is any benevolence to be found, it is of the Trojan variety. The NFZ smuggles in the guise of peacekeeping an easy entrance to outright war sooner and probably also later.

After all, once instituted, there are three ways the no-fly zone can go. First, if the NFZ appears to work, it may be presented as evidence that this is a reliable approach which can wisely be used in the future to calm other outbreaks of hostilities. Whether NFZs actually have this magical calming effect is often ill-considered, and in fact the evidence of their effectiveness is mixed at best.

Second, if the NFZ seems to have no effect, its failure offers our war-eager politician an easy route around that obnoxious public opinion. The initial objection to a whole new intervention is handily bypassed—the no-fly zone means we’re already over there—and now the next step can only be escalation to airstrikes, ground war, possibly regime change, and almost certainly decades of nation-building. This callous risk of American blood and treasure without public debate or constitutional process is a shameful way to launch a war, but recent history in Libya shows Washington is not above it.

The third option is grimmer still. Using an ineffective NFZ as a pretext for full-blown intervention is reckless, but riskier yet is the chance of starting a war even politicians don’t want. That’s arguably the biggest problem with institution a no-fly zone in Syria, a plan long championed by many in the Washington foreign policy establishment . In Syria, not only would a NFZ attempt to ground the Bashar al-Assad regime, but it would also see U.S. fighters taking on Russian planes.

Though Syria NFZ supporters seem to believe Russia would back down in the face of hot war with the United States, that is by no means certain. The Assad regime is a strategically important Russian ally, a fact that raises the stakes in an already intense situation. So if a “no-fly zone in Syria is meant to stop Assad, Putin and the Iranians, and provide safe areas for noncombatants” all at once, argue Naval Academy professor Stephen Wrage and Marine veteran Scott Cooper at Defense One, it is a long shot at best. In fact, they add, “There is nothing in the record of no-fly zones to suggest that would be possible.”

National Review’s David French agrees, finding a rare point of foreign policy confluence with Sen. Rand Paul (R-Ky.). “Any meaningful no-fly zone [in Syria] has to be enforced against Russia,” the neoconservative writer argued while reflecting on Paul’s NFZ opposition last fall. “That decision—let’s be perfectly clear—would move a great-power conflict from ‘possible’ to probable. … A no-fly zone is an unacceptable risk.”

French, Wrage, and Cooper are correct.. The third and worst scenario is the most likely outcome of an American NFZ in Syria, and it is a wildly rash and dangerous proposition. A war-torn Syria is no mean problem, but it does not and cannot post an existential threat to the United States. War with Russia can, and a Syrian no-fly zone makes just such a war all too possible.

The most worrisome part of all this is that risk is all too real already. Though the Obama White House has long insisted it will not risk a NFZ in Syria, at the end of August the Pentagon made a remarkably Orwellian announcement that there are areas in Syria which are not NFZs but rather places where Russian and Syrian planes “would be advised not to fly” if they don’t want to get into a shootout with U.S. forces. (If you are capable of parsing the difference here, your fluency in bureaucrat is better than mine.)

Since this no-fly zone that’s not a no-fly zone doesn’t cover the whole country of Syria, its risks are at this point comparatively small. But low up-front risks are the whole selling point of NFZs. That’s exactly what makes them such a treacherous backdoor to war.

Bonnie Kristian is a fellow at Defense Priorities, contributing writer at The Week, and a columnist at Rare.