"I just wore it. Didn't even turn around."

NEW YORK (TheBlaze/AP) — A teenage fan at Yankee Stadium showed off quite an arm Sunday — at the expense of All-Star outfielder Brett Gardner.

The New York left fielder was hit in the back of the head but not hurt when a fan threw back a ball that Toronto slugger Jose Bautista had launched for a home run. 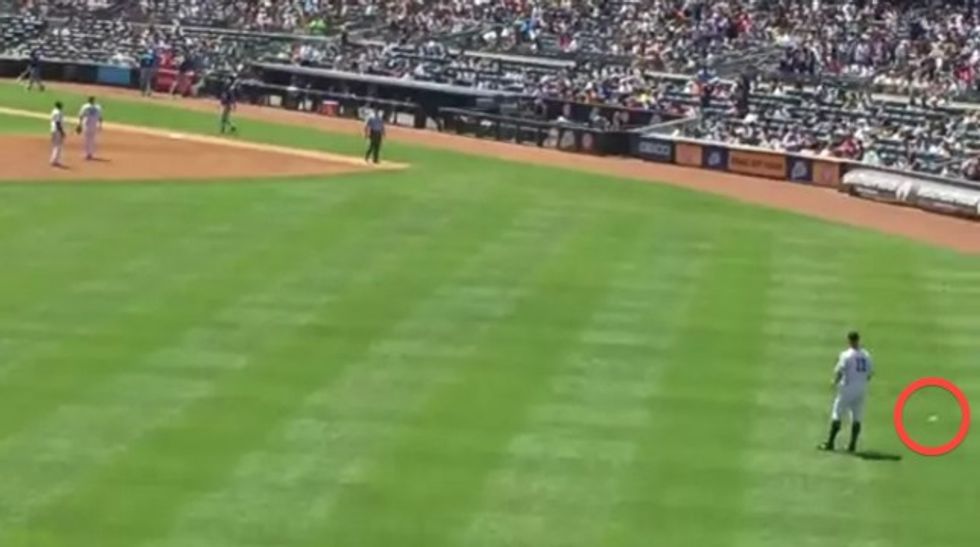 The ball is visible just after Gardner was hit. (Image source: Twitter)

Gardner immediately flinched after he was struck in the fourth inning, but stayed in the game without a problem. 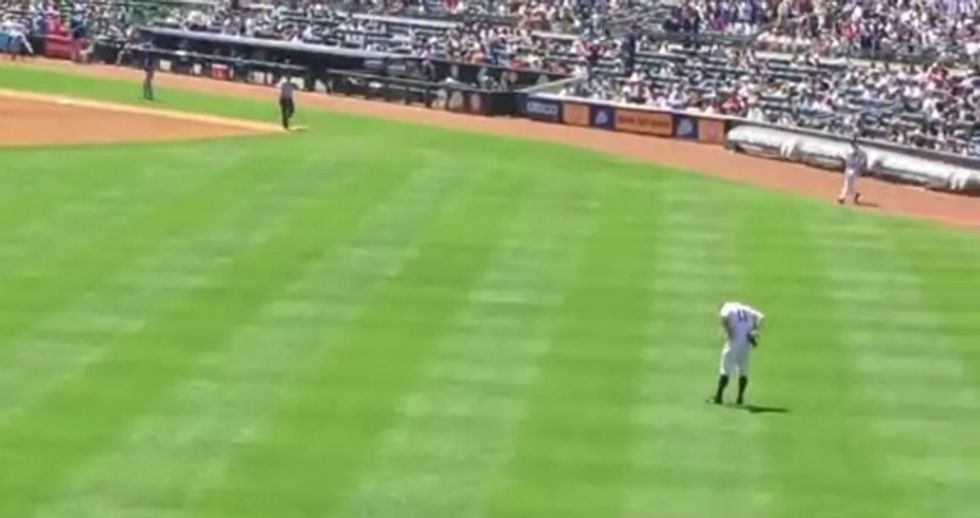 "I just wore it. Didn't even turn around," he said. "It wasn't like it was coming from the second row. It was a long ways away."

Following the Yankees' 2-0 defeat, Gardner said he had a little bump on his crown.

Fans all across the majors often throw back home runs hit into the stands by opponents. Those tosses rarely come close to hitting players on the field.

Yankees spokesman Jason Zillo said the 15-year-old fan who threw the ball was seated with his father. Zillo said stadium security workers spoke to the pair and issued a warning, but they were not ejected from the ballpark.

"Hit him right in the head, and that's kind of disappointing. I know it's kind of tradition to throw it back, but at least aim away from the players if you're going to do it, please," Yankees manager Joe Girardi said.

"It's been going on for years. I don't know if I've seen anyone hit before. It's dangerous when fans throw objects on the field because players really aren't looking for that. I don't know if that's ever going to change, I'd just ask our fans to be careful."

The funniest line came from New York first baseman Mark Teixeira, who ran into traffic while lunging into the stands on an unsuccessful attempt to catch a foul pop in the ninth.

"Tell the fans, you know, you can insult but you cannot assault," he said, cracking up a pack of reporters. "We know you're upset, we lost three in a row, we're sorry, but just keep it to insults, not assaults."

Here's the clip. The ball can be spotted in the opening seconds hitting Gardner and bouncing off him, much to the audible shock of fans in the outfield seats:

#BrettGardner hit in the head by baseball that someone threw back #Yankees @Yankees @espn @SportsCenter @BlueJays pic.twitter.com/toDY0oZNii