"I apologize when I'm wrong, but I haven't been wrong. I said nothing wrong."

WASHINGTON (TheBlaze/AP) — Donald Trump doesn't appear to be going away anytime soon, so his rivals are scrambling to figure out how best to handle the blowback from every new bout of bluster drowning out their campaigns. 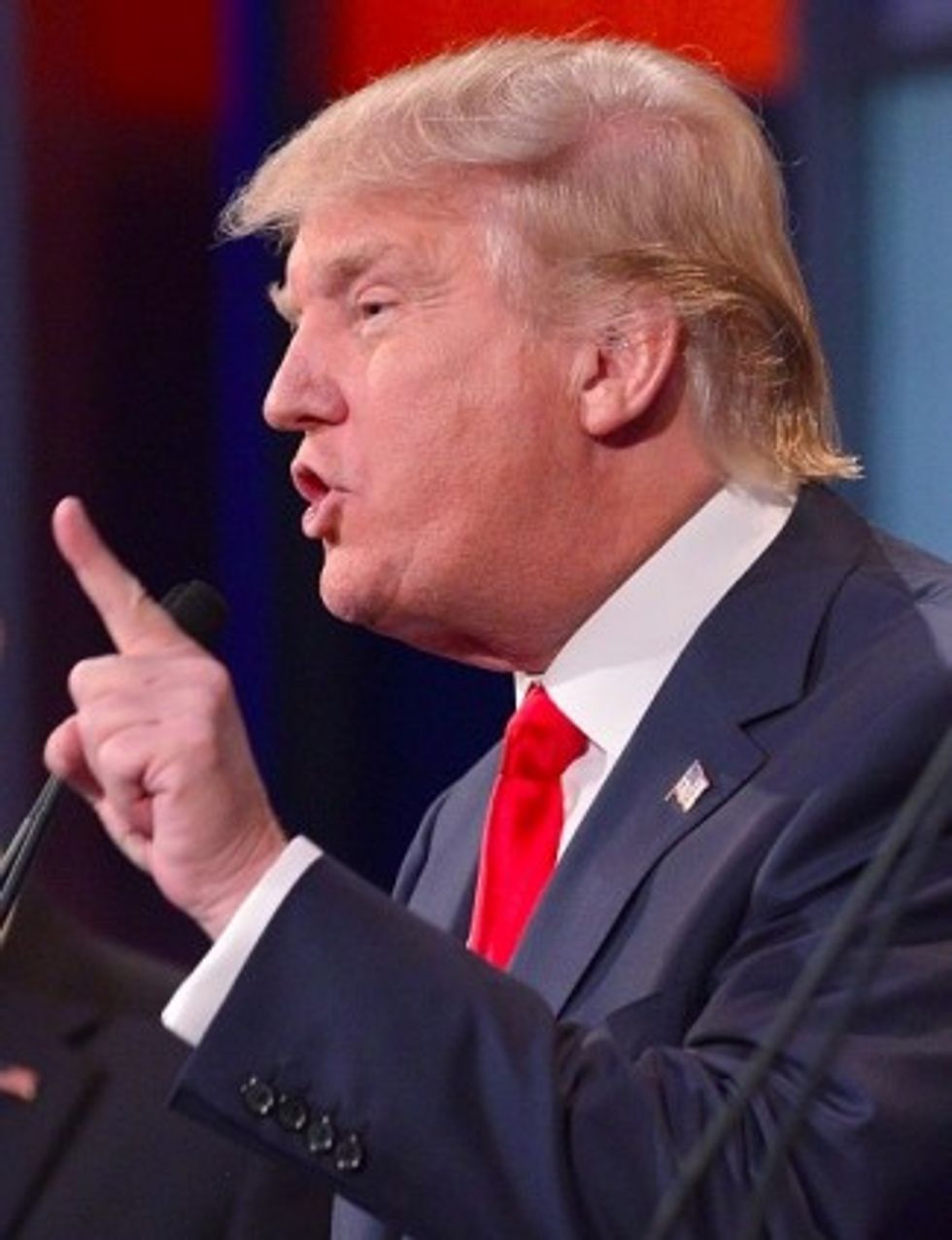 Lead the charge, if you're the sole woman in the Republicans' White House race and trying to crack the top tier for the next debate, by questioning Trump's ability to withstand the pressure of the presidency.

Belittle Trump's claim to be a truth-teller by arguing that self-promotion is the billionaire's guiding philosophy.

Warn that Trump's provocative comments about women endanger the party's standing with a group that makes up the majority of voters.

Or simply plead for the incessant Trump questioning to cease so that other candidates can get on with the business of why they're running.

These are some of the varied approaches of the other 16 Republican candidates fighting for attention and breathing room in a primary field eclipsed by Trump.

In fact, the real estate mogul remained atop a new NBC News poll conducted from Friday evening into Saturday — the period of time Trump came under fire for his comments about Fox News host Megyn Kelly and was axed from a conservative event. Yet Trump led the poll with 23 percent, besting the the runner-up — Sen. Ted Cruz — with 13 percent.

And on Sunday, he was back, splashed across the weekend news shows, dismissing the latest firestorm to consume his campaign and explaining how he cherishes women and would be their strongest advocate if elected. "I'm leading by double digits, so maybe I shouldn't change," he boasted.

The remark cost Trump a prime-time speaking slot at the RedState Gathering, the Atlanta conference where several other presidential candidates spoke to about 1,000 conservative activists.

But Trump refused to back down, insisting Sunday that only "a deviant" would interpret his comment beyond a harmless barb.

"I apologize when I'm wrong, but I haven't been wrong. I said nothing wrong," said Trump, who spoke to four Sunday news shows, skipping only Fox News, the network with which he is feuding.

The flap is just the latest from Trump's unconventional, insurgent campaign, which has excited many anti-establishment conservatives while confounding party leaders already facing the prospects of a bruising fight among 17 candidates.

Some have responded by sharpening their critiques, questioning Trump's electability, his conservative credentials, policy ideas and personality.

Former Hewlett-Packard CEO Carly Fiorina, the only woman running for the GOP nomination, appeared most adept at seizing on the comments as she strives to break into the top 10.

"I think women of all kinds are really sort of horrified by this," she said, arguing that there was a difference between being politically incorrect and insulting.

She also questioned Trump's suitability for office, suggesting the businessman may be unprepared for the pressure that comes with being president.

"I think you cannot have a president who is thin-skinned. If you think a question is tough, imagine the pressure of actually being in the Oval Office," she said.

I just realized that if you listen to Carly Fiorina for more than ten minutes straight, you develop a massive headache. She has zero chance!

Paul also continued a line of attack he began in the debate. "I have no idea whether he's conservative," the senator said. "He really could be a liberal, for all I'm concerned. I have no idea what his real philosophy is, other than that he is for promoting himself."

Jeb Bush, the presidential favorite for many top Republican donors, said at RedState that Trump's bombast would hurt the GOP's chances with women, who already tilt toward Democrats in presidential elections. "Do we want to win? Do we want to insult 53 percent of all voters?" the former Florida governor asked.

Other candidates bemoaned the challenge of preaching their message when all their precious free TV time is spent being asked about Trump.

"At this point, I mean, we've got to focus on our message. Otherwise, my whole campaign will be, 'How do you feel about what Donald Trump said about something?'" Florida Sen. Marco Rubio said. "He says something every day."

Ohio Gov. John Kasich, took a similar tone, describing himself as a strong proponent of women, but avoiding criticizing Trump at length.

"I think it's more important for me to tell you who I am and what I think, than spend my time on the negative side of the street," he said.

Mike Huckabee, a former Arkansas governor seemed exasperated at RedState, at one point snapping at reporters after being asked several Trump-related questions. On Sunday, he took a more measured approach.

"I think the rest of us are doing what we're supposed to do and that's focus on getting a message out, which is sometimes hard to do because all the air in the balloon is going to Donald Trump right now," he said.

Trump, who has refused to rule out a third party run if he falls short of the GOP nomination, was asked about those Republicans wondering what it will take to get him out of their party. "I don't think anything. I really want to stay."

Trump was interview on NBC's "Meet the Press," CBS' "Face the Nation," ABC's "This Week" and CNN's " State of the Union."

Executive Producer Jessica Loker said in a statement that Fox News Sunday doesn't do phone interviews with presidential candidates and that the show is in conversation with Trump's campaign about a future on-camera interview.

Fiorina was on CNN, CBS and "Fox News Sunday. Kasich appeared on CNN and ABC, while Huckabee was on ABC, Rubio on NBC and Paul on Fox.