Horror on Delta Flight 1889: ‘I Fly Constantly and This Was the Scariest 10 Minutes of My Life’

Passengers on board the plane were unaware of the extent of the damage from the storm until after they exited the plane once it had made an emergency landing. (Image via Twitter @sorrogrande)
Kaitlyn Schallhorn

A Delta plane from Boston to Salt Lake City was forced to make an emergency landing in Denver on Friday as hail shattered the plane's front windshield and damaged the nose cone — giving passengers on board quite a scare.

"There were times when we felt like the air dropped out from under us. We could see lightning spider-webbing over the wings and hail pounding the plane," passenger Beau Sorensen told the Denver Post. 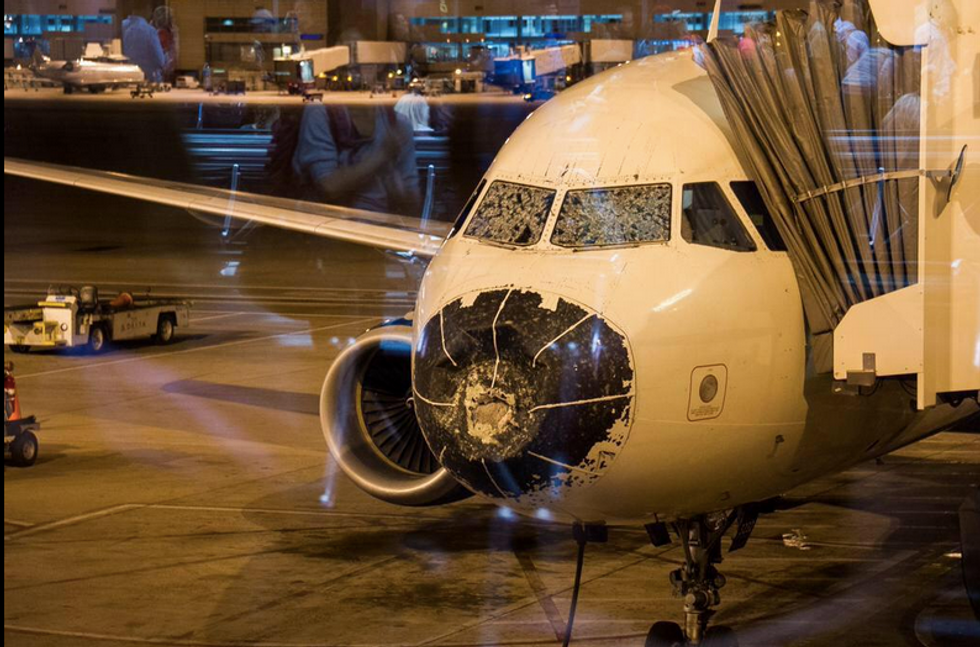 Passengers were unaware of the extent of the damage from the storm until after they exited the plane once it had made an emergency landing. (Image via Twitter @sorrogrande)

Sorensen said children and teenagers were screaming as the plane flew through the thunderstorm in Nebraska near the Colorado border. He said the turbulence shook the plane sideways as well as up and down, comparing it to a cork on a rough sea.

A passenger on the plane — one of 125 — reported on Twitter that the plane dropped 12,000 feet in altitude in less than one minute.

"I fly constantly and this was the scariest 10 minutes of my life," Robin Jones, a passenger, told KSTU-TV after landing at the Salt Lake International Airport early Saturday morning. "I thought, 'OK. Have I told everybody that I love that I love them?' And as soon as I realized I had done that, I was like, 'I’m alright. Everything’s going to be OK.'"

The storm was short, and Delta Flight 1889 veered south immediately afterward to make an unplanned landing at Denver International Airport at 8:42 p.m., FAA spokesman Ian McGregor said. Emergency vehicles surrounded the plane as soon as it landed on the tarmac, and paramedics attended to one elderly woman who Sorensen speculated was suffering from anxiety because of the storm.

Audio recordings of  the plane's pilots speaking to air traffic control revealed just how little they could see when they were making the emergency landing.

"We're probably going to have to do an autoland here. We have a visibility problem here," one pilot said in the recording obtained by KMGH-TV. "Just be advised that both our forward windshields have significant damage so it's a forward visibility problem."

Delta Spokeswoman Liz Savadelis said the plane's radome — the nose of the plane that stores weather radar and navigation equipment — was damaged in the storm. The Aviation Herald reported that the damage caused the weather radar to fail.

"We went around the corner from the window, we could see the shattered windshield," passenger Rob Wessman told KSTU. "We could see kind of a hole over the engine where lightning had struck. We could see the nose of the plane was missing. It was really intense."

A flight attendant told the Denver Post that it was the worst flight of her 30-year career.

Passengers were able to board a different plane to head to Salt Lake City, but Sorensen said some were too shaken up by the ordeal and opted to rent a car instead.

The Federal Aviation Administration is investigating.

Must be bad. They have refreshments waiting at the gate for us.

#Delta should give the pilot of my flight a sizable bonus for saving our butts. pic.twitter.com/O5EntnI5A2

Hail damage to my plane while flying from Boston to Salt Lake. Emergency landing in Denver. #DL1889 #Delta1889 pic.twitter.com/HGQuCwHOK1