Dentist Who Killed Cecil the Lion Lied About Killing a Black Bear Illegally in 2006 and Apparently Offered $20,000 in 'Aggressive Cover-Up

"He was offering to pay...to have them lie."

Protesters call attention to the alleged poaching of Cecil the lion, in the parking lot of Dr. Walter Palmer's River Bluff Dental Clinic on July 29, 2015 in Bloomington, Minnesota. According to reports, the 13-year-old lion was lured out of a national park in Zimbabwe and killed by Dr. Palmer, who had paid at least $50,000 for the hunt. (Adam Bettcher/Getty Images)
Liz Klimas

The Minnesota dentist under fire for killing Cecil the Lion on a safari hunt in Zimbabwe was accused of offering $20,000 to cover up his illegal killing of a black bear in Wisconsin in 2006.

According to ABC's "20/20," Walter Palmer had a permit for bear hunting in one county, but not in the one where he ended up actually shooting the animal. It was then that U.S. Attorney John Vaudreuil said he tried to get others with him to lie.

"As soon as the bear was killed, Palmer and the three guys he was with — guides — they agreed they would lie about it," Vaudreuil told "20/20," which also obtained photos from the Wisconsin Department of Fish and Wildlife of the bear hunt.

"He was offering to pay, it turns out, about $20,000 to keep the others who were in the hunt, to have them lie, so that’s a fairly aggressive cover-up,” Vaudreuil added.

WEAU-TV offered more details on the case, which went to court in 2008 and has been touched upon in the weeks after his killing of the protected lion:

The members of the group, including Palmer, agreed that if any authorities were to ask where the bear had been killed, they would say it had been killed off Taylor Lake Road south of Minong, a location in Subzone A1.

On October 15, 2006, and again on October 25, 2006, a special agent of the U.S. Fish & Wildlife Service interviewed Palmer. In those interviews Palmer falsely stated that he believed he had shot the bear off Taylor Road, and that he thought the bear had been killed legally.

Palmer originally faced up a maximum penalty of five years in prison, but ended up pleading guilty to false statement charges and was sentenced to one year probation and paid a $2,938 fine.

After killing the collared lion that was tracked for research, officials in Zimbabwe said they're seeking the extradition of Palmer, alleging he lacked authorization to kill Cecil last month. Palmer, who paid $50,000 for the hunt, according to the National Parks and Wildlife Management Authority, said he relied on professional guides to ensure his hunting was legal.

Robert Mugabe says Zimbabweans are to blame for Cecil the lion’s death http://t.co/HunTNQvZGz

Palmer ended up closing his dentistry practice as a result of the backlash and animal rights activists took it one step further, asking the Minnesota Board of Dentistry to investigate the dentist who killed a protected lion in Zimbabwe.

The Animal Legal Defense Fund says it filed a complaint Wednesday alleging that Walter Palmer brought disrepute to Minnesota's dental profession and should have his license revoked. 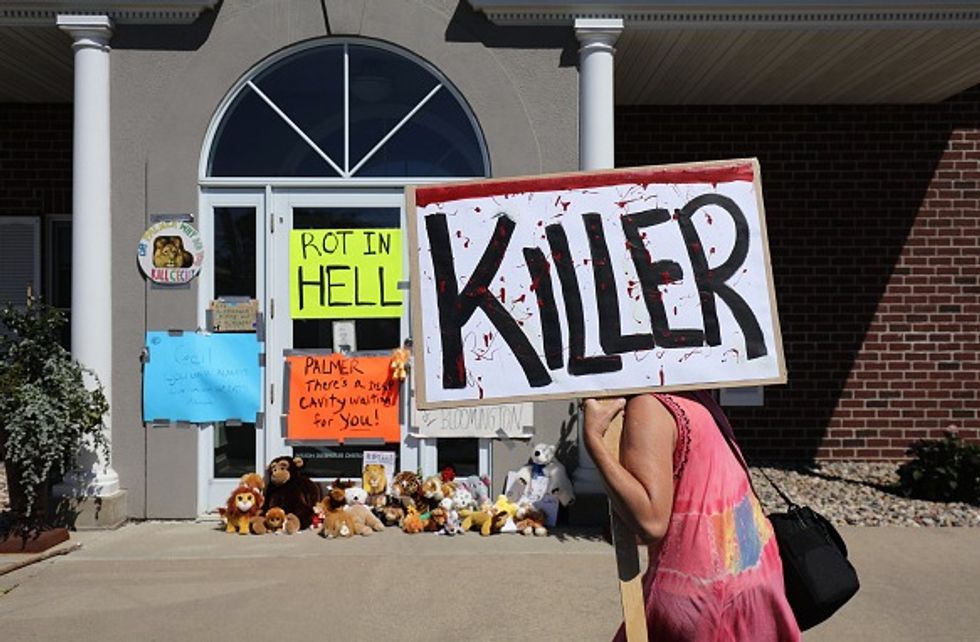 Protesters call attention to the alleged poaching of Cecil the lion, in the parking lot of Dr. Walter Palmer's River Bluff Dental Clinic on July 29, 2015 in Bloomington, Minnesota. According to reports, the 13-year-old lion was lured out of a national park in Zimbabwe and killed by Dr. Palmer, who had paid at least $50,000 for the hunt. (Adam Bettcher/Getty Images)

In Minnesota, anyone can file complaints to the dentistry board alleging unbecoming conduct. Details about investigations don't become public unless the board takes corrective action.

A hand-made sign criticizing Palmer was left in the yard last week. A security company has been hired to protect the property.