Obama Golfed With Bill Clinton on Martha's Vineyard. Want to Guess What They Chatted About Between Putts?

For former President Clinton, the photo-op comes as his wife, Obama's former secretary of state, struggles to demonstrate to the party that her candidacy is as infallible as was once believed.

President Barack Obama, halfway through his annual two-week getaway on the Massachusetts island, teed off in the afternoon with former President Bill Clinton, trading compliments on the first hole. Later in the day, both presidents joined Democratic presidential front-runner Hillary Rodham Clinton at another Democratic luminary's birthday party. 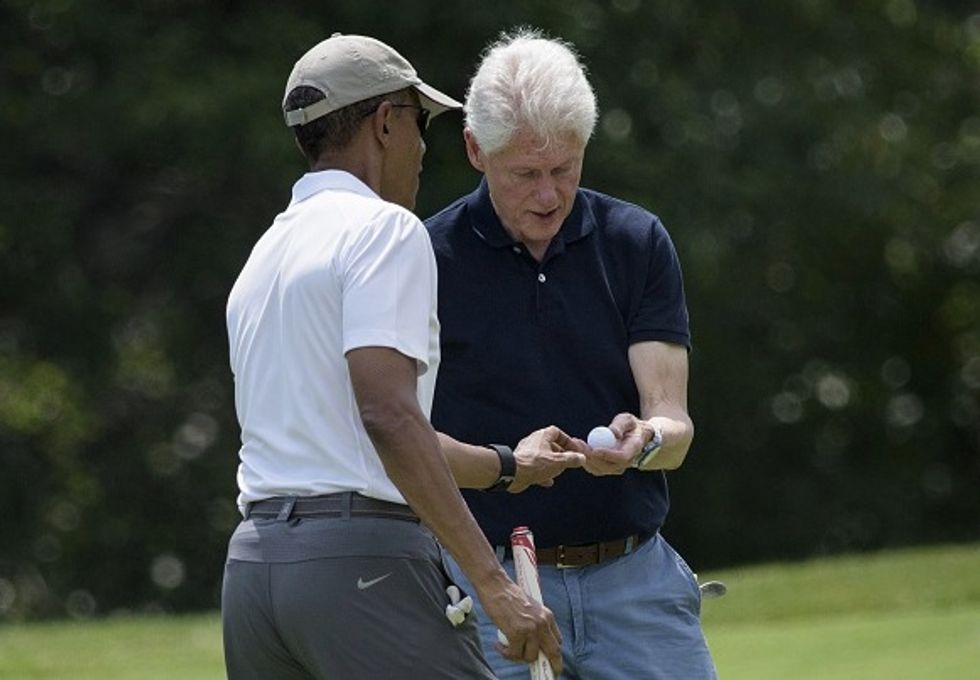 "Good!" said a spry-looking Clinton, donning light blue pants and a dark shirt, after Obama made his putt on the first hole at Farm Neck Golf Club in Oak Bluffs. The former president then kneeled down to scope out his own putt before joining Obama on a golf cart to be driven to the second hole.

Occasional golf partners, Obama and Clinton had crossed paths the day before as both played separately on another golf course on the Vineyard. Rounding out their foursome on the waterside course Saturday were former Ambassador Ron Kirk and civil rights figure Vernon Jordan. Both Clintons were on the guest list for Jordan's 80th birthday party on Saturday night, along with the president, first lady Michelle Obama and daughters Sasha and Malia.

For former President Clinton, the photo-op comes as his wife, Obama's former secretary of state, struggles to demonstrate to the party that her candidacy is as infallible as was once believed. Hillary Rodham Clinton's poll numbers have dipped as criticism of her use of a private email server for government business mounts, leading some Democrats to give a renewed look at Vice President Joe Biden as a potential 2016 challenger to the former first lady.

As the current leader of the Democratic Party, Obama's preference in the race has been the source of intense interest, as Democrats assess which of the current or potential candidates poses the best prospect for securing his legacy and carrying it forward. Obama hasn't tipped his hand, praising both Clinton and Biden effusively. He isn't expected to endorse a candidate in the Democratic primary.

Reporters covering Obama's vacation here were given a brief peek from a distance, with a baseball-capped Obama taking practice shots. But Saturday night's soiree took place in private, with a number of other big-name corporate, civil rights and political leaders in attendance.

An attorney and business executive, Jordan advised President Clinton and played a prominent role in the civil rights movement. He's known the Obamas for decades. Last year both Obama and Clinton attended a party Jordan hosted on the island, where Jordan and his wife summer each year.

Hillary Rodham Clinton, who also planned to hold campaign fundraisers while on Martha's Vineyard, arrived later in the day from Iowa, where on Saturday she insisted she never sent or received emails marked classified through her home email server. She accused her Republican opponents and GOP lawmakers of partisanship as the email affair continued to overshadow her campaign.

Obama and his family vacation every August on Martha's Vineyard, and he's spent most of this year's trip on the golf course, at the beach and dining at the island's upscale restaurants. Obama returns to Washington on Aug. 23.

Later in the month, the Clintons will vacation in the Hamptons in New York, where Clinton also plans to attend fundraisers for her campaign.

The following clip apparently is from when Obama and Clinton crossed paths Friday: