"Smoke was still billowing from the wreckage when it was spotted by a plane search."

Indonesia's Transport Minister Ignasius Jonan (L) looks on as Director General for Air Transportation Suprasetyo (R) speaks during a press conference in Jakarta on August 16, 2015, announcing that a missing plane carrying 54 people has crashed into a mountain in eastern Indonesian province of Papua. A passenger plane of Trigana Air carrying 54 people went missing on August 16, during a flight in bad weather in rugged eastern Indonesia, officials said, in what could be the latest accident to hit the country's aviation sector. (ROMEO GACAD/AFP/Getty Images)
Liz Klimas

JAYAPURA, Indonesia (AP) -- A passenger plane with 54 people on board that crashed in the mountains of eastern Indonesia was carrying nearly half a million dollars in government cash for poor families to help offset a spike in fuel prices, a local postal official said Monday.

Smoldering wreckage of the Trigana Air Service turboprop plane was spotted from the air Monday morning in a rugged area of the easternmost province of Papua, rescue officials said. There was no immediate word if there were any survivors from Sunday's crash, which happened in bad weather.

Four postal workers aboard the plane were escorting four bags of cash totaling $468,750 in government fuel aid, Haryono, the head of the post office in Jayapura, the provincial capital, told The Associated Press.

The ATR42-300 twin turboprop plane was flying from Jayapura to the city of Oksibil when it lost contact. Transportation Ministry spokesman Julius Barata said there was no indication that the pilot had made a distress call.

The cash from the Social Affairs Ministry was to be distributed among poor people in remote areas to cushion the jump in fuel costs, said Haryono, who like many Indonesians goes by one name.

"They were carrying those bags (of cash) to be handed out to poor people in Oksibil through a post office there," Haryono said.

President Joko "Jokowi" Widodo's administration raised fuel prices late last year and slashed government subsidies, a move the government says will save the country billions of dollars but has already sparked angry protests around the country.

Officials said the wreckage was spotted about 12 kilometers (7 miles) from Oksibil. Henry Bambang Soelistyo, the chief of the National Search and Rescue Agency, said search and rescue teams were preparing to try to reach the crash site by air and foot.

The plane was carrying 49 passengers and five crew members on a scheduled 42-minute flight. Five children, including two infants, were among the passengers.

"Smoke was still billowing from the wreckage when it was spotted by a plane search," said Soelistyo who is leading the rescue operation from Sentani Airport in Jayapura, adding that bad weather and rugged terrain were hampering efforts to reach the wreckage located in a mountainous area at an altitude of 2,600 meters (about 8,500 feet). 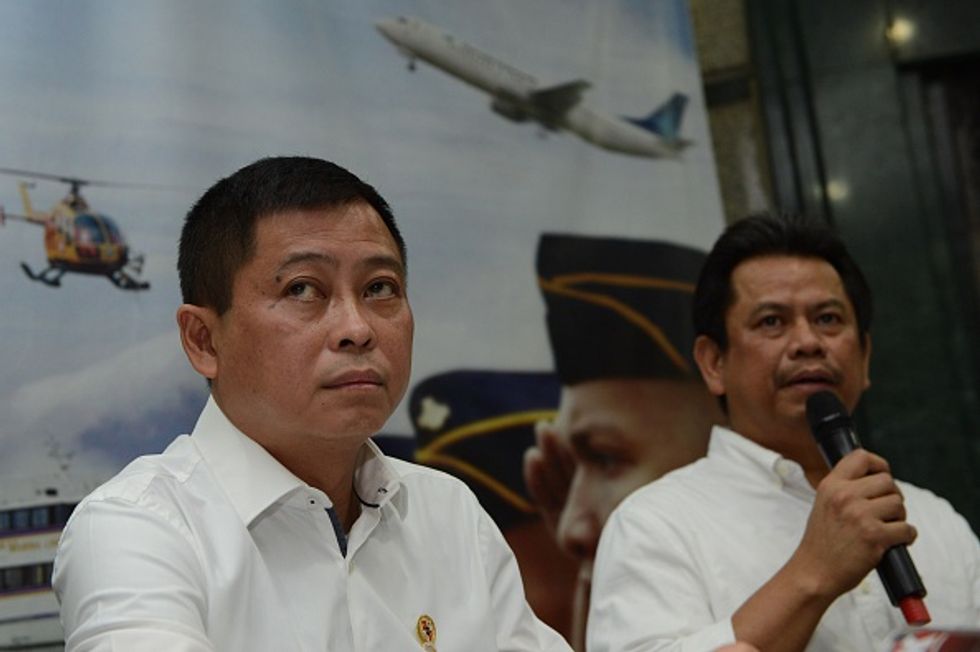 Indonesia's Transport Minister Ignasius Jonan (L) looks on as Director General for Air Transportation Suprasetyo (R) speaks during a press conference in Jakarta on August 16, 2015, announcing that a missing plane carrying 54 people has crashed into a mountain in eastern Indonesian province of Papua. A passenger plane of Trigana Air carrying 54 people went missing on August 16, during a flight in bad weather in rugged eastern Indonesia, officials said, in what could be the latest accident to hit the country's aviation sector. (ROMEO GACAD/AFP/Getty Images)

He said elite forces from the air force and army will build a helipad for evacuation purposes near the crash site. Much of Papua is covered with impenetrable jungles and mountains. Some planes that have crashed in the past have never been found.

Search planes went into the air early Monday after residents of a village not far from Oksibil told local police that they saw a plane flying low before crashing into a mountain, said Ludiyanto, who heads the search and rescue operation from Jayapura.

The airline's crisis center official in Jayapura's Sentani airport, Budiono, said all the passengers are Indonesians and there were nine names on the initial passenger manifest were eventually replaced by other persons - a common practice among small domestic airlines in the country.

Budiono also said that among the passengers were three local government officials and two members of the local parliament who were to attend a ceremony Monday in Oksibil marking the 70th anniversary of Indonesia's independence from Dutch colonial rule.

Oksibil, some 280 kilometers (175 miles) south of Jayapura, was experiencing heavy rain, strong winds and fog when the plane lost contact with the airport minutes before it was scheduled to land.

European plane maker ATR said in a statement late Sunday that it "acknowledges the reported loss of contact" with the Trigana flight "and is standing by to support the relevant aviation authorities." ATR, based in Toulouse, France, makes regional planes with 90 seats or less.

Indonesia has had a string of airline tragedies in recent years. In December, all 162 people aboard an AirAsia jet were killed when the plane plummeted into the Java Sea as it flew through stormy weather on its way from Surabaya, Indonesia's second-largest city, to Singapore.

The sprawling archipelago nation of 250 million people and some 17,000 islands is one of Asia's most rapidly expanding airline markets, but it is struggling to provide enough qualified pilots, mechanics, air traffic controllers and updated airport technology to ensure safety.

From 2007 to 2009, the European Union barred Indonesian airlines from flying to Europe because of safety concerns.

Trigana Air Service, which commenced operations in 1991, had 22 aircraft as of December 2013 and flies to 21 destinations in Indonesia.