7.5-Magnitude Earthquake Causes 'Casualties and Destruction' in and Around Afghanistan

"I was praying when the massive earthquake rattled my home."

Stranded drivers wait in their vehicles after an earthquake in Srinagar on October 26, 2015. A powerful 7.5 magnitude earthquake killed at least 70 people as it rocked south Asia on October 26, including 12 Afghan girls who were crushed to death in a stampede as they tried to flee their collapsing school. Thousands of frightened people rushed into the streets in Afghanistan, Pakistan and India as the quake shook a swathe of the subcontinent. (TAUSEEF MUSTAFA/AFP/Getty Images)
Liz Klimas

KABUL, Afghanistan (AP) -- A strong earthquake in northern Afghanistan was felt across much of South Asia on Monday, shaking buildings from Kabul to Delhi, cutting power and communications in some areas and killing at least 18 people. 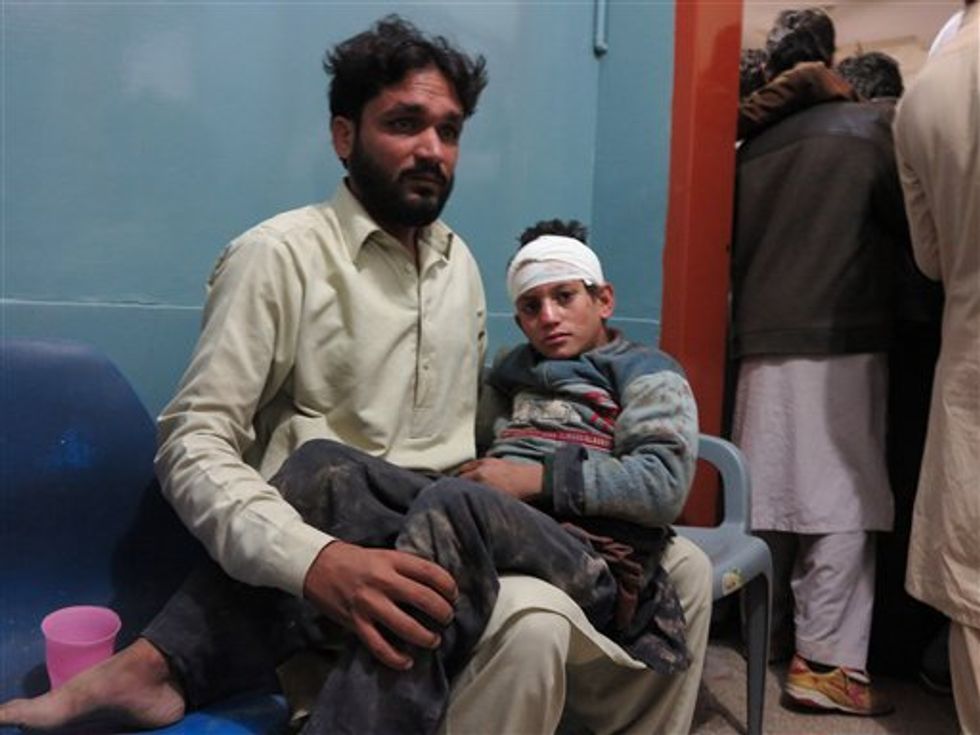 A Pakistani man holding his son waits for medical help at a local hospital in Mingora, Pakistan, Monday, Oct. 26, 2015. A powerful 7.7-magnitude earthquake in northern Afghanistan rocked cities across South Asia. Strong tremors were felt in Kabul, New Delhi and Islamabad on Monday. In the Pakistani capital, walls swayed back and forth and people poured out of office buildings in a panic, reciting verses from the Quran. (AP/Naveed Ali)

In Takhar province, west of Badakhshan, at least 12 students at a girls' school were killed in a stampede as they fled shaking buildings, said Sonatullah Taimor, the spokesman for the provincial governor. Another 30 girls were taken to the hospital in the provincial capital of Taluqan.

In Pakistan, at least five people died when homes collapsed in the Khyber Pakhtunkhwa province, said Mohammad Bilal, a rescue official. He said more than 100 people were wounded in the area. State-run Pakistani TV had earlier reported that a person died when a roof collapsed in the eastern city of Kasur, bringing the total known toll from the quake to 18.

In Badakhshan itself, "there are reports of casualties and destruction" in some remote districts near the epicenter, said the provincial director of the Afghan National Disaster Management Authority, Abdullah Humayoon Dehqan.

Badakhshan's deputy chief of police, Sakhi Dad Haidari, said dozens of houses had been destroyed in two remote and sparsely populated rural districts, with some damage reported in Fayzabad. 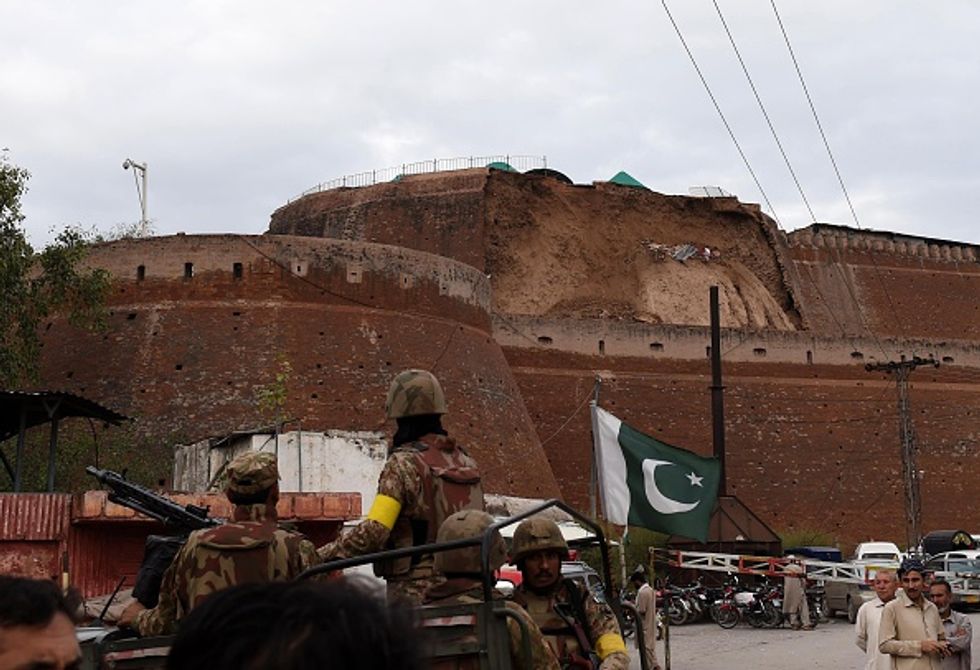 Pakistani paramilitary soldiers observe the damaged wall of a fort used by security forces after an earthquake in Peshawar on October 26, 2015. At least 17 people including eight children were killed in Pakistan when a 7.5 magnitude quake struck in Afghanistan October 26, officials said. (A Majeed/AFP/Getty Images)

Abdullah later tweeted that the meeting would assess damage in one of Afghanistan's most vulnerable regions.

Power was cut across much of the Afghan capital, where tremors were felt for around 45 seconds. Houses shook, walls cracked and cars rolled in the street. Officials in the capital could not be immediately reached as telephones appeared to be cut across the country.

In Pakistan, Zahid Rafiq, an official with the meteorological department, said the quake was felt across the country. In Islamabad, buildings shook and people poured into the streets in a panic, with many reciting verses from the Quran. 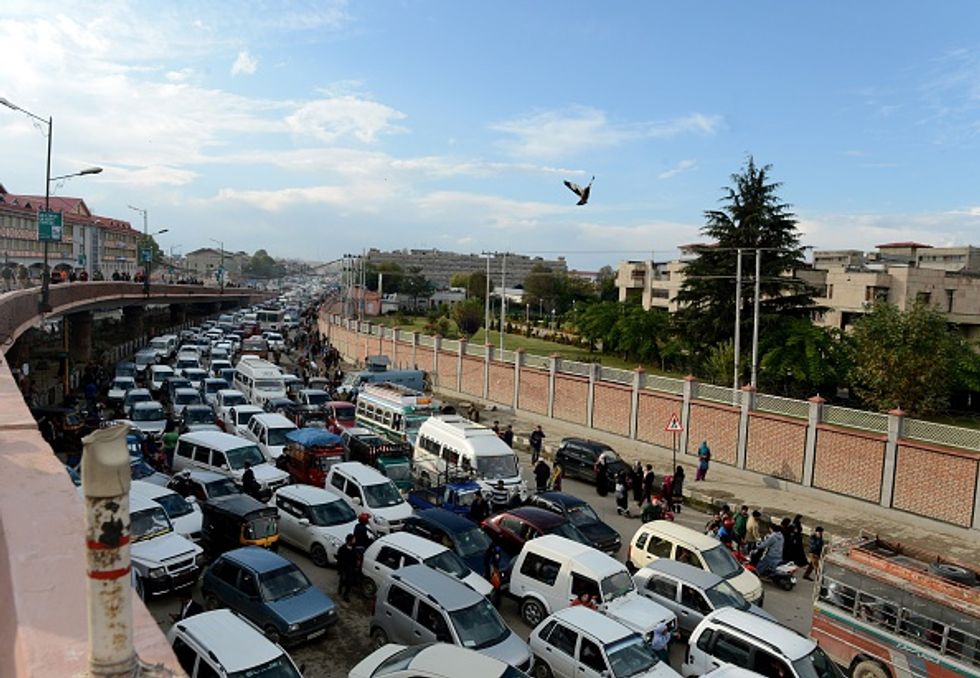 Stranded drivers wait in their vehicles after an earthquake in Srinagar on October 26, 2015. A powerful 7.5 magnitude earthquake killed at least 70 people as it rocked south Asia on October 26, including 12 Afghan girls who were crushed to death in a stampede as they tried to flee their collapsing school. Thousands of frightened people rushed into the streets in Afghanistan, Pakistan and India as the quake shook a swathe of the subcontinent. (TAUSEEF MUSTAFA/AFP/Getty Images)

"I was praying when the massive earthquake rattled my home. I came out in a panic," said Munir Anwar, a resident of Liaquat Pur in Pakistan's eastern Punjab province.

Pakistan's army chief, Gen. Raheel Sharif, ordered troops to the quake-affected areas, the military said in a statement. It gave no further details.

The quake was also felt in the Indian capital New Delhi, though no damage was immediately reported. Office buildings swayed and workers who had just returned from lunch ran out of buildings and gathered in the street or in parking lots.

In Srinagar, the main city in the India-controlled portion of disputed Kashmir, the tremors lasted at least 40 seconds, with buildings swaying and electrical wires swinging wildly, residents said.

"First I thought somebody had banged the door. But within seconds, the earth began shaking below my feet, and that's when I ran out of the building," said government official Naseer Ahmed.

People ran outside, shouting, crying and chanting religious hymns in an effort to keep calm. "I thought it was the end of the world," shopkeeper Iqbal Bhat said.

Srinigar police Inspector General Syed Javaid Mujtaba Gilani said there were no immediate reports of casualties, but that "some bridges and buildings have been damaged," including a cracked highway overpass.