AP Fact Check: The GOP Debaters and the Facts

WASHINGTON (AP) -- Ben Carson pitched a tax plan with numbers that didn't add up. Donald Trump boasted that he's paying his own way in the campaign, but he isn't. Chris Christie accused the government of stealing Social Security money that it has actually borrowed - and has been paying back with interest.

Even the price of hamburger got a bad rap in the latest Republican presidential debate, thanks to Ted Cruz.

A look at some of the claims Wednesday night and how they compare with the facts: 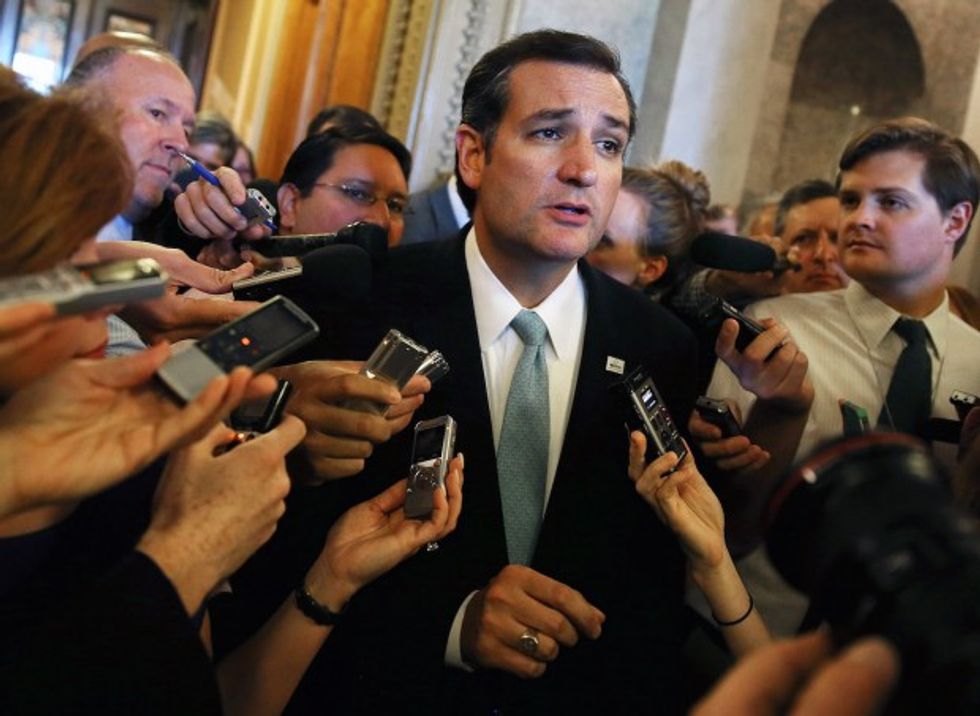 CRUZ: "If you look at a single mom buying groceries, she sees hamburger prices have gone up nearly 40 percent. She sees her cost of electricity going up. She sees her health insurance going up. And loose money is one of the major problems."

THE FACTS: Americans may be facing many economic challenges, but rising inflation isn't one of them. And "loose money," a way of describing the Federal Reserve's low interest rate policies, isn't to blame for expensive hamburgers.

Electricity costs have actually fallen 0.4 percent during that period. Those are national averages, so some local areas will have different figures. Overall, inflation has remained below even the Fed's 2 percent target for the past three years. In fact, the government's primary inflation measure, the Consumer Price Index, has actually been unchanged in the past 12 months. 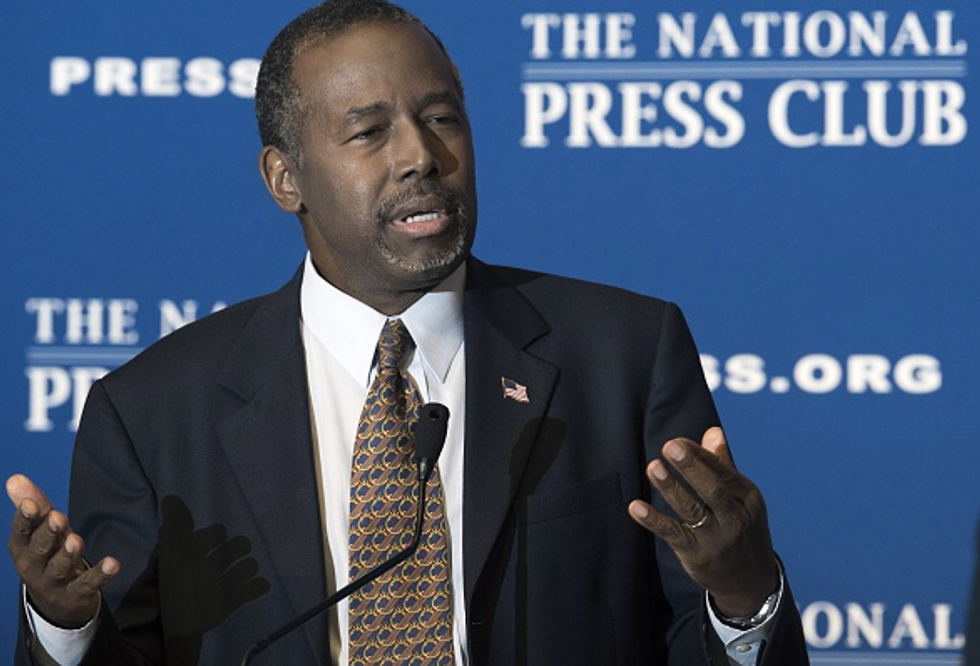 Republican presidential candidate Ben Carson gestures as he discuss his new book 'A More Perfect Union: What We the People Can Do To Reclaim Our Constitutional Liberties' at the National Press Club in Washington, DC on October 9, 2015. Republican White House hopeful Ben Carson said he stood by controversial comments linking gun control to the Holocaust, as he argued for arming staff in schools to prevent future mass shootings. AFP Photo/PAUL J. RICHARDS (Photo credit should read PAUL J. RICHARDS/AFP/Getty Images)

CARSON: His proposed flat-rate tax, which would have everyone pay an income tax rate of about 15 percent, "works out very well" in budget terms because it would spark enough economic growth to offset the lower rate.

THE FACTS: Carson says his proposed tax would not increase the budget deficit because he would tax the entire economic output of the U.S. - the gross domestic product - plus corporate income and capital gains.

Carson has not laid out a detailed plan, so it is difficult to measure how it would affect revenues or the economy. But based on what he said, he's double-counting because corporate revenues are part of the GDP.

A tax rate of 15 percent would be a huge tax cut for the wealthy. The top income tax rate for individuals is now 39.6 percent. The corporate tax rate for corporations is 35 percent.

To help offset the rate cuts, Carson said he would "get rid of all the deductions and all the loopholes." That's a bold proposal, considering how popular many tax breaks are, including deductions for interest on home mortgages and charitable contributions, as well as exemptions for health insurance and retirement savings. 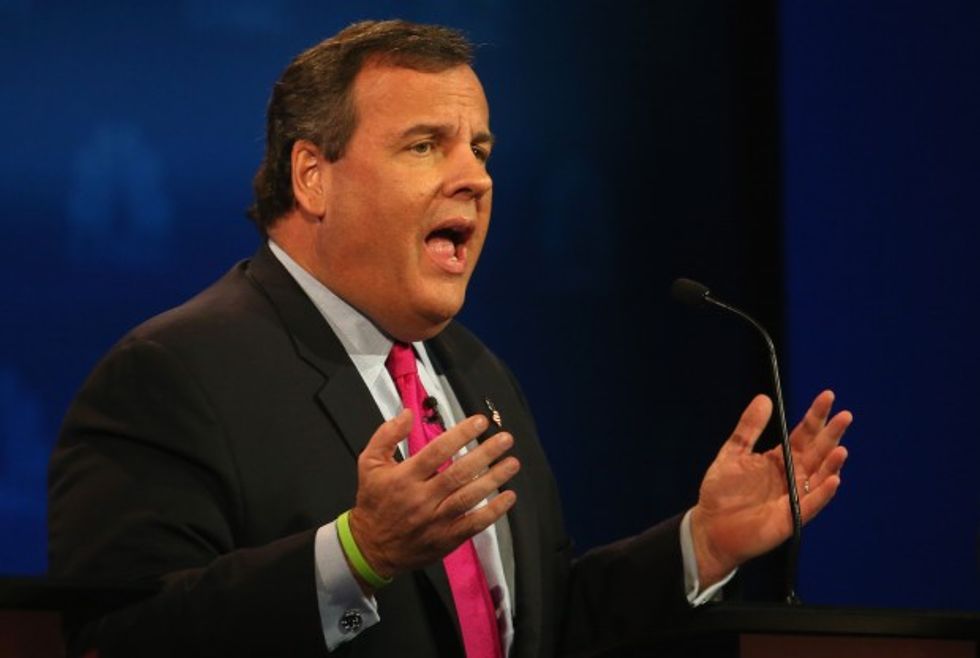 CHRISTIE: FBI Director James Comey said police officers are holding back "because of a lack of support from politicians like the president of the United States."

THE FACTS: That's not what Comey said.

In a speech last week about an alarming rise in crime, Comey said some officers feel under siege because of the spread of viral videos taken by young people with cell phones. Comey said he'd heard about one police official who told his force "their political leadership has no tolerance for a viral video."

But Comey never mentioned Obama or blamed politicians for failing to support police. And Comey made clear he didn't have data to back up his gut impression.

Christie also said when Obama was asked to speak about the issue, he declined to support police. In fact, Obama gave a firm defense of police Tuesday, telling a police chiefs convention that "this country is safer because of your efforts." 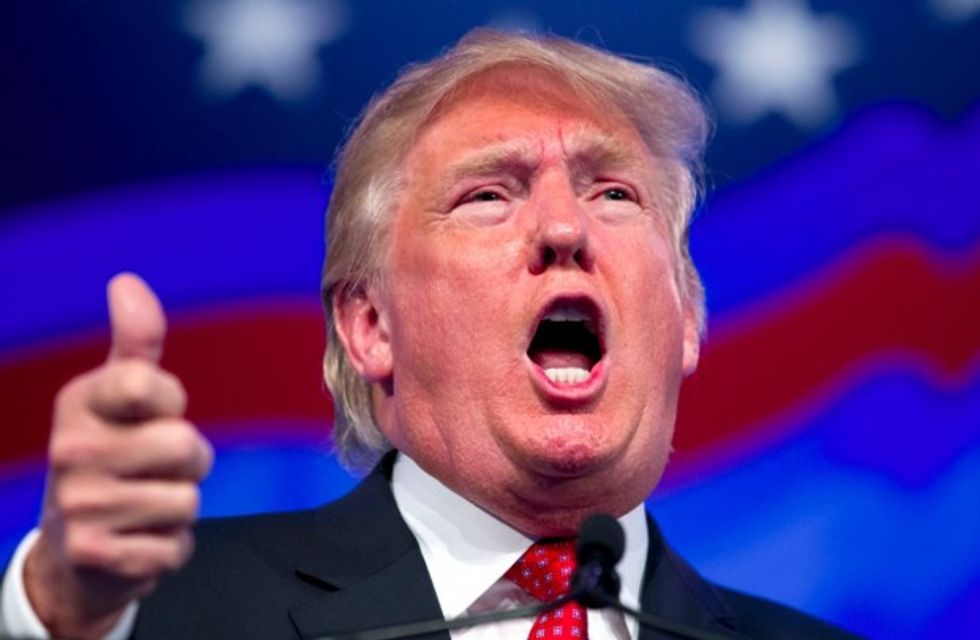 Of $3.9 million raised for his campaign in the latest fundraising quarter, only $100,000 came from his own pocket. That was one major revelation from the latest batch of presidential fundraising reports, filed Oct. 15 with the Federal Election Commission.

That's a drastic shift from his springtime fundraising report, when he loaned his campaign nearly all of the $1.9 million it had. 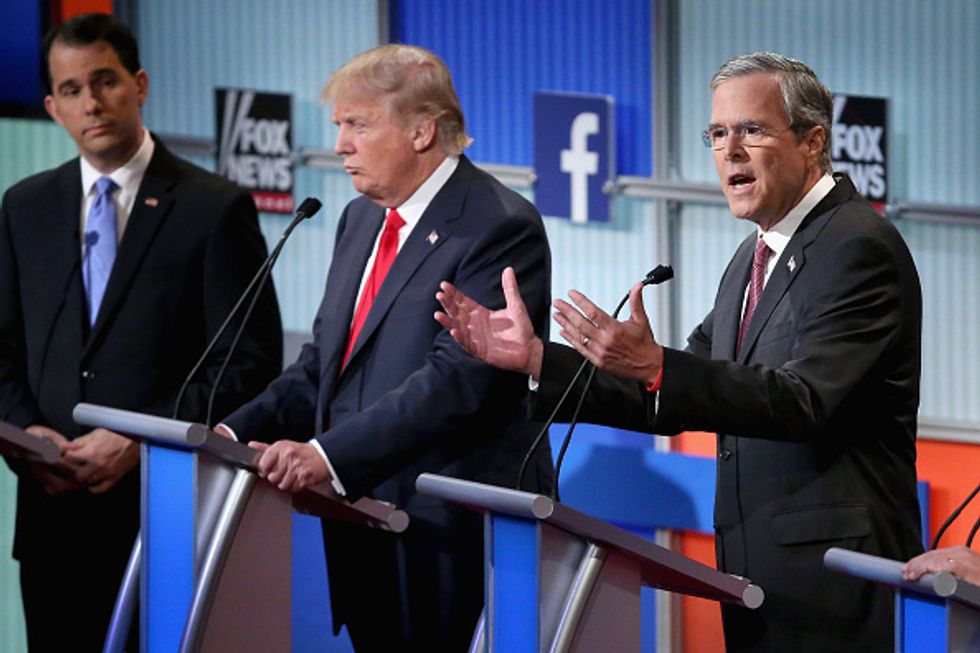 BUSH: "Marco, when you signed up for this, this was a six-year term, and you should be showing up for work."

RUBIO: "Barack Obama missed 60 or 70 percent of his votes" when running for president while he was in the Senate.

THE FACTS: Bush correctly cited Rubio's spotty attendance record in the Senate since running for president, but ignored the fact that this is common when someone in public office runs a White House campaign -and previous candidates were absent far more often. Bush himself is free to run for president as he pleases, because he doesn't have a day job from which to be absent.

For his part, Rubio didn't offer a fair comparison when comparing his Senate voting rate with Obama's.

From Oct. 27, 2014, to Oct. 26, 2015, Rubio was absent for 26 percent of Senate votes, a worse attendance record than other senators running for president, according to an analysis by GovTrack.us, which tracks congressional voting records.

Both Obama and McCain went on to miss an even bigger share of Senate votes as the election progressed - an expected development bound to be seen again in 2016.

CHRISTIE: The federal government has "stolen" the Social Security taxes paid by workers and spent it on other things. "It isn't their money any more. ... It got stolen from them. It's not theirs anymore. The government stole it and spent it a long time ago."

THE FACTS: The money is not stolen, it's borrowed.

Over the past 30 years, Social Security has collected about $2.7 trillion more in payroll taxes than it has paid in benefits. By law, the Treasury Department has invested the surplus in U.S. Treasury bonds.

Over that same time period, the federal government has run budget deficits in all but a few years. To finance the deficits, the government has borrowed money, from other government agencies as well as public debt markets.

Social Security has been paying out more in benefits than it collects in taxes since 2010. The program has been able to pay full benefits because the federal government has honored the bonds.

TRUMP: Asked about his criticism of Rubio for his support for increasing the number of high-skilled foreign workers given visas to work in the U.S. - calling Rubio Facebook CEO "Mark Zuckerburg's personal senator" - Trump denied ever making the comment. "I never said that. I never said that," he said.

THE FACTS: He did say it, on his own website. Trump's immigration policy calls for a different approach - raising the prevailing wage for the jobs that attract high-skilled foreign workers, in hopes that they'll be filled by more Americans.

Trump's policy statement said doing that "will improve the number of black, Hispanic and female workers in Silicon Valley who have been passed over in favor of the H-1B program. Mark Zuckerberg's personal Senator, Marco Rubio, has a bill to triple H-1Bs that would decimate women and minorities."

SEN. RAND PAUL: The new budget agreement "will explode the deficit, it will allow President Obama to borrow unlimited amounts of money."

THE FACTS: The agreement allows $80 billion more spending over the next two years, which is only a small addition to the $3.67 trillion the government spends every year. The government's annual budget deficit has declined to $439 billion, about 2.5 percent of GDP, below the average for the past 40 years.

Overall, whatever its faults, most economists have responded to this week's budget deal between Congress and the White House with a sigh of relief. The agreement, approved by the House earlier Wednesday, sets funding levels and extends the government's borrowing limit for two more years, thereby taking the threat of a government shutdown and debt default off the table.

A 2013 budget fight led to a 16-day partial government shutdown that was widely blamed by most economists for sharp drops in consumer and business confidence that dragged on the economy.

GEORGE PATAKI: "Hillary Clinton put a server, an unsecure server, in her home as secretary of state. We have no doubt that that was hacked, and that state secrets are out there to the Iranians, the Russians, the Chinese and others."

THE FACTS: The former New York governor, speaking in the undercard debate, exaggerated what's actually known about what happened to the emails of Clinton, the Democratic front-runner for her party's presidential nomination. While Clinton's email server was poorly configured and therefore more susceptible to hacking, there is no evidence of intrusion.

The FBI is studying the server, which was subjected to a phishing attack by Russian-linked hackers while she was secretary of state. It's not known whether she clicked on any attachments, which would have exposed her account. Her account was also apparently the subject of cyberattacks originating in China, South Korea and Germany after she left office in early 2013. Determining whether a hack was sponsored by a nation, rather than just originating from that country, is notoriously difficult.