Name of witness against MS-13 gang given to defense attorneys because of new bail reform law. That witness was just beaten to death. (UPDATE)

'The system failed. This man's dead because we didn't do enough.'

UPDATE, 10:20 a.m. Friday: A new report indicates defense attorneys for the MS-13 gang members said they never told their clients the name of the witness set to testify against them who was found beaten to death Sunday.

In response to him standing up for the kids, the gang members repeatedly stabbed Rodriguez and hit him in the head with a bat, the paper said. Nine members of the MS-13 gang were arrested in connection with the attack, WNBC-TV reported.

An agreement to testify

Nevertheless, Rodriguez agreed to testify against the gang members charged with assault and witness intimidation as a result of the attack, officials told the Times.

Nassau Police Commissioner Patrick Ryder told the station prosecutors protected Rodriguez's identity for more than a year. But in early January they had to reveal his name to the gang members' attorneys because the state's new bail reform law — urged into existence by "progressive lawmakers," the Times said — requires it. 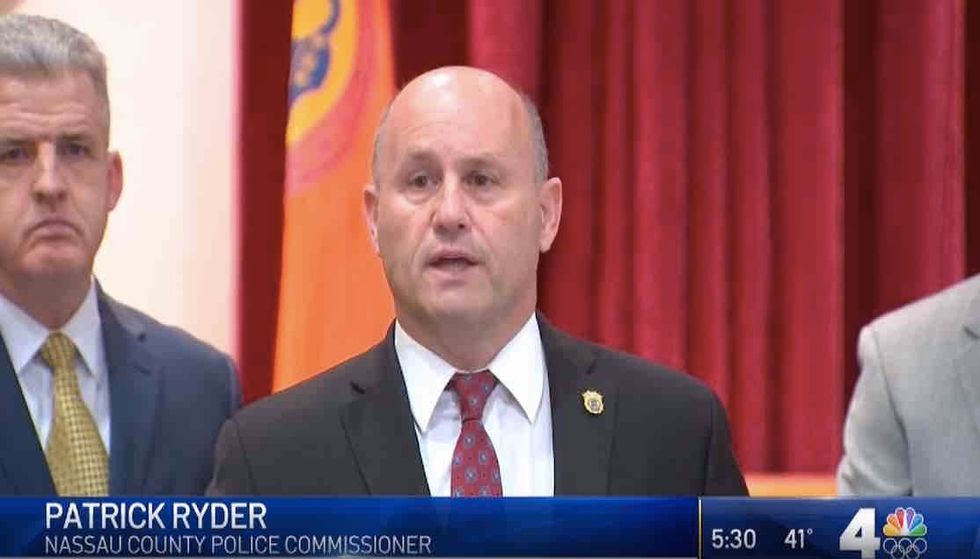 After Rodriguez's name was released, Ryder said a "pattern of intimidation" began against him, the Times added.

Rodriguez, 36, was found beaten to death Sunday outside a home in New Cassel, New York, the paper said.

"This courageous man was prepared to testify against his alleged assailants at an upcoming trial but he was brutally beaten to death before he could," Nassau County District Attorney Madeline Singas said, according to WNBC, which added that no arrests have been made in connection with the killing.

Some maintain the death of Rodriguez — who was described as homeless — could have been avoided if not for the new law, the station added.

"The system failed," Ryder said, according to WNBC. "This man's dead because we didn't do enough." He added to the station that Rodriguez's information "which should have been protected was turned over too early."

Later, Ryder appeared to hedge his remarks, saying there was "no direct link between the death of Wilmer Maldonado Rodriguez and criminal justice reform," the Times said.

The other side's point of view

The paper also spoke to those who said pinning Rodriguez's death on the new bail reform law is ridiculous:

"This has absolutely nothing to do with the new criminal justice reforms," said Mike Murphy, a spokesman for the State Senate's Democratic majority, which lobbied aggressively for the bail and discovery changes.

Lisa Schreibersdorf, the executive director of Brooklyn Defender Services, said that any law enforcement authorities seeking to tie Mr. Rodriguez's death to the new rules were jumping to conclusions with no factual basis.

"There is absolutely no way this is related to the discovery laws," Ms. Schreibersdorf said, adding that she had spoken to some of the lawyers in the case.

Scott Hechinger, a senior attorney at Brooklyn Defender Services, noted on Twitter that the revised law explicitly allowed judges to shield witnesses' identities. The law, passed as part of last year's budget, also says discovery can be limited to a defendant's lawyer or legal team, and not shared with the defendant.

The Times added that lawyers for three of the defendants that Rodriguez was to testify against didn't immediately respond to requests for comment, adding that two of the three defendants were scheduled to appear Thursday in Nassau County Criminal Court.

There have been more than a few consequences related to the state's new bail reform law since it's been enacted, which requires judges to set most criminal defendants free without posting bail during their pretrial phase: