Hey, Look! That Woman Is Trying to Be Modest! Let's All Laugh at Her and Call Her Names!

Modesty is good. We can laugh at it, we can make fun of it, we can treat it like a joke, but in the end we only degrade ourselves.

This is getting ridiculous.

When did we decide to be the kind of society that mocks virtue? When did we turn into the pudgy, freckle faced bully in all of the 90's teen sitcoms who points and laughs at the studious kid just because he's well behaved and does his homework? Maybe it's always been this way. I don't know. What I do know is that, these days, we are lost. It's not that we do terrible things (although we do), it's that we either don't know or pretend we don't know what we should be doing.

We run around like decapitated poultry, colliding with each other and bumping into walls. And when someone with their head on straight, or with their head on at all, suggests a clear direction, a course of action, or a change of behavior, we descend upon them like crazed hyenas. When someone simply says, "hey, that there is not good, but this here is good, so we should probably do this rather than that," we pounce on them and rip their guts out, then hang their entrails from a bridge as a warning to anyone else who might get a little bold one day and think about developing a moral compass.

Take the case of Veronica Partridge, for example. She's a Christian wife and blogger who recently wrote a post called "Why I Chose to No Longer Wear Leggings." Her message is very simple. Really, in a country not populated by headless chickens, it wouldn't even be noteworthy. She merely says that people ought to be modest, and that women, particularly married women, shouldn't go out in attire that is specifically designed to spark the attention of other men. She relates it all to herself, and says that she has resolved to be more mindful about what she wears. That's it.

There are, I suppose, controversial places you could take that message. She could have made the case that all females should walk out of the house ensconced in burlap and bubble wrap. This would be an undeniably valid principle ("women should be modest"), applied in a questionable way. If she had said something like that, then it would make sense for people to argue that modesty does not require such drastic measures. But it still wouldn't make sense for anyone to argue that modesty, in principle, is unimportant, or absurd, or funny, or laughable, or oppressive.

Anyway, that's not what she said. Instead, she wrote about leggings. For the uninitiated, leggings are those skin tight spandex pants that were originally designed to be worn under other pieces of clothing, but which have now become popular as regular attire for some women. They are tailored to accentuate every curve, and as the saying goes, they leave little to the imagination. In other words, if worn on their own and not underneath something else, they're immodest. Of course they're immodest. If spandex butt-huggers aren't immodest, then what is? Do you have to actually walk into the grocery store wearing nothing but socks and a sign that says "HEY LOOK AT ME" before we can accuse you of being a bit too forward?

[sharequote align="center"]In the Age of Progress, you can't suggest that mothers and wives shouldn't walk around in underwear.[/sharequote]

So, yes, women (and men) shouldn't be walking around in spandex, particularly married women (and married men, God help us). At any point in human history, up until just the past couple of decades, this code of conduct would be so plainly self-evident that you'd question the sanity of anyone who felt the need to say it out loud. But these, tragically, are progressive times. And in the Age of Progress, you can't go around suggesting that mothers and wives shouldn't walk down the street in underwear. You just can't do that. You can't propose even the most casual and undemanding standards of modesty without eliciting volcanic outrage from all corners of the internet.

Indeed, her supremely moderate anti-spandex missive gained headlines across the Western Hemisphere. Headlines. Because she said she wanted to be more modest. This is what passes for an Earth shattering development in our culture of morally obtuse overgrown adolescents. She was predictably mocked , and scolded, and demeaned. Even conservative blogs took her to task, utilizing the left wing tactic of screaming the date ("it's 2015!") as if that proves anything. (Hint to all self-proclaimed conservatives: you can't be a conservative and then try to attack an idea by accusing it of not being sufficiently modern.)

My favorite argument made in all of these rambling refutations, and the one always made in these situations, is that she should stop "making such a big deal out of this." But wait, all Mrs. Partridge did is express her own choice, on her own blog, to be more prudent in her attire. These people are the ones who are taking the time to so passionately defend the honor of spandex. They are the ones getting upset. They are the ones being petty. They are the ones who cannot cope with even the slightest, most mild condemnation of their behavior. They are the ones with absolutely no perspective here.

And what's disturbing isn't that so many people are trying to justify this type of clothing as modest, but that so many have just categorically denied the importance of modesty in the first place. An entire virtue completely wiped off the table. Disqualified. Penalized and ejected from the game.

Look at the arguments they make:

I'll wear what I want because I like it.

You can't tell me how to dress, that's oppressive.

If a man is lustful, that's his problem.

It's the man's job not to look.

These are attacks against modesty itself. Forget leggings -- these lines of logic (I use the term loosely) deny the very premise of modesty. And herein lies the real trouble. We're no longer arguing over how virtues should be applied, or how they manifest themselves, or what they look like when acted upon; we're fighting over whether we ought to be virtuous at all.

Now, I've already written that modesty goes beyond wardrobe choices. But it definitely includes your wardrobe, and if these are the best reasons you have for what you're wearing, then you shouldn't be wearing it, whatever it is. When we act virtuously, we act positively. Positively in the sense that we are actively trying to conduct ourselves in a way that is honest and moral. 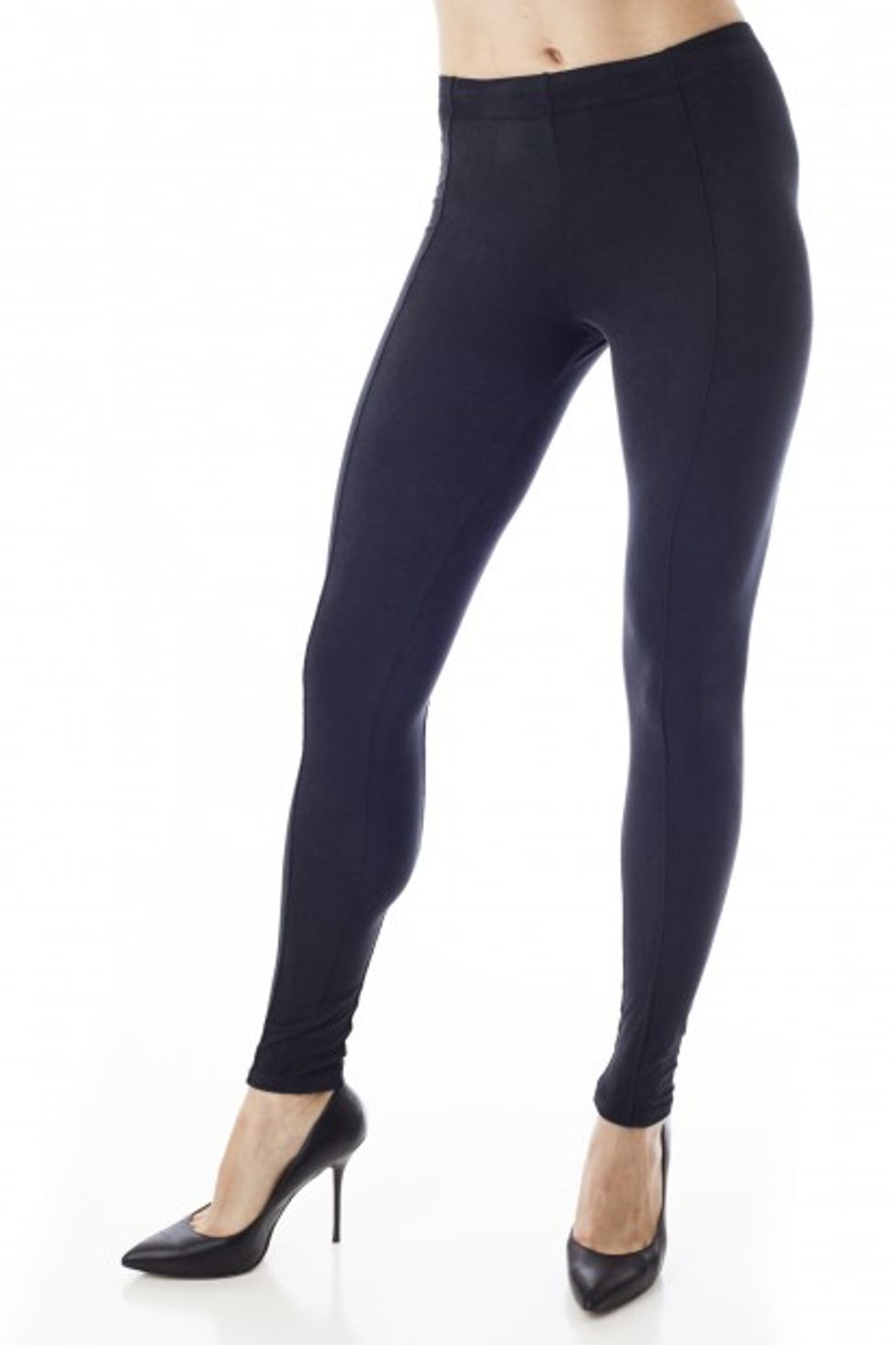 Our outfits are not morally neutral things. They are worn either for good reasons or for bad ones. And I say that fully knowing that some women wear underwear as pants not in a deliberate effort to attract male attention, but just out of laziness, in spite of the attention they may attract. This would still be filed in the "bad reason" folder. It may require effort to dress with class and dignity, but the fact that it's such a bummer to put on real clothing before we leave the house doesn't relieve us of the obligation.

It would be difficult to explain all of this to someone who is not a Christian. Not impossible, but difficult. At the very least, it would require another 10,000 words or so to first convince them to accept the basic premise of Christian morality, and then to explain why that morality applies to your pants. I don't have the space for that undertaking, so I'll continue along aware that what I'm saying may be irrelevant to you if you're already an avowed secular relativist. But for Christians, we know that we do not make choices in a void. Our actions have consequences, and we are required to consider them beforehand.

So if your Christian brothers are saying that you are making it more difficult for them to remain on the pure and chaste path when you go out in public wearing something that very explicitly highlights the private regions of your body, if you know that your brothers in Christ struggle in this way, if you have heard them say it, then you better have very good reason to ignore them. I don't think the reason exists. I haven't heard it yet. "I like it, it's comfortable, it makes me feel good, it's convenient" -- these aren't moral defenses. They're excuses, yes, but not morally positive reasons to act a certain way or do a certain thing.

And it's not just about how others will react. Modesty is about preserving our own dignity and our own humanity. It's about becoming ourselves -- a self, a being of body and soul -- and not merely an object of desire or envy. We should always go to any lengths, even extreme lengths if necessary, to ensure that we are identified first and foremost as a child of God and a follower of Christ. The act of not wearing leggings as pants is not even all that extreme in the grand scheme of things.

I know that I often fail to act with dignity, maybe not because of my choice of clothing, but for a thousand other reasons. Some of those reasons include my own versions of immodesty -- not sexual immodesty, but immodesty all the same -- and so this is not me yelling at you for your speck while ignoring the plank lodged deep into my own eyes. All I'm doing is pointing out some basic truths, and if you want to turn these words around and accuse me of failing to live up to them myself, I will only agree with you. I'm sinner and a hypocrite, absolutely. But that doesn't mean I'm wrong about this.

I wish I were wrong, actually. I wish our choices could be considered justifiable just because they make us feel good and we want to do them. That would be an easier world, in some ways. Chaotic, hopeless, dark, confusing, yes, but at least you could wear yoga pants without any bloggers hassling you about it.

Yet that isn't the reality. We live in a world of good and evil, and every decision we make either moves us closer to one end of that spectrum or the other. I'm not saying that any woman who wears spandex as outerwear is the embodiment of evil and will burn in Hell for all eternity, but I am saying that we wear what we wear for good reasons or not. And if they aren't good reasons, then they're bad reasons. I think all we need to do is take an honest look inside ourselves, and the answer becomes pretty clear.

Modesty is good. We can laugh at it, we can make fun of it, we can treat it like a joke, but in the end we only degrade ourselves.

“In a sort of ghastly simplicity we remove the organ and demand the function. We make men without chests and expect of them virtue and enterprise. We laugh at honour and are shocked to find traitors in our midst. We castrate and bid the geldings be fruitful.” -- C.S. Lewis