Opposition to Boehner as speaker shouldn’t be taken personally. It’s not about Boehner the man, it’s about demanding courage from him as a leader. He has been given a green light to enact a bold agenda. All he has to do is put his foot o

The Speaker of the House vote was illuminating in many ways. Although Rep. John Boehner (R-Ohio) managed to win a third term as Speaker, there was an undeniable, and indeed historic uprising against his leadership from 25 members of his own party, the highest number of defections in over a century.

Perhaps even more striking was the incredible swell of grassroots enthusiasm for a change in leadership. Over a period of just 72 hours, FreedomWorks activists sent more than 20,000 messages to Congress and made 13,000 phone calls. This is not the kind of uprising that can be ignored, and the question Boehner should be asking himself today is: Why?

It’s no mystery. Time after time, year after year, dedicated conservatives and libertarians have come out to the polls to vote for smaller government, lower taxes, fewer regulations and more freedom. We have won some amazing victories, from the grassroots avalanche in 2010 to this year’s successful recapture of the Senate majority. 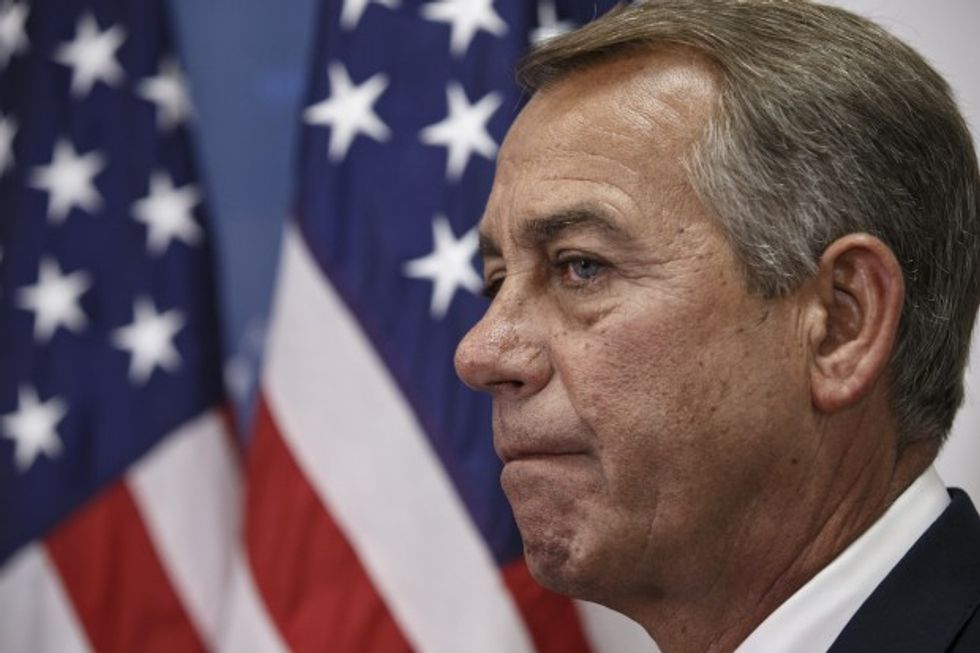 Before heading to the White House today to meet with President Barack Obama, House Speaker John Boehner of Ohio, tells reporters that the House of Representatives will pass a budget for the Department of Homeland Security but will block President Barack Obama's executive actions on immigration, Tuesday, Jan. 13, 2015, on Capitol Hill in Washington. (AP Photo/J. Scott Applewhite)

And yet, for all this, the promised reforms never seem to materialize. Once the heat of the elections is over and Congress reconvenes, all the campaign promises are forgotten and we see a return to business as usual in Washington. The spending cuts of the sequester are slowly fading away. The "CRomnibus" spending bill was crafted behind closed doors, further expanding government with no meaningful reforms. There’s little on the horizon to make voters feel that their voices have been heard. That’s why people are fired up. When, they wonder, will we finally see real change and stop kicking the can down the road?

It’s natural to be frustrated when the supposed party of limited government advances, as its top agenda item, the Keystone XL Pipeline. Really? With Obamacare denying people access to medical care, with the NSA routinely spying on us without a warrant, with a dysfunctional criminal justice system badly in need of reform, this is the best that our representatives can do? A pipeline? Republicans need an agenda that inspires people. They need to solve the problems that are affecting average Americans at the dinner table every night, not playing small ball or catering to special interests. Republicans say they want to repeal ObamaCare’s medical device tax. I’m sure the medical manufacturing industry will thank them, but how does that help the people who can no longer afford insurance because of ObamaCare’s rising premiums? We can do better. We have to do better, or else we will to lose in 2016.

That’s why the opposition to Boehner in this vote shouldn’t be taken personally. It’s not about Boehner the man, it’s about demanding courage from him as a leader, as a champion of reform. Boehner once promised to cut $100 billion from the budget, a promise that unfortunately evaporated in the face of political pressures. He could become a conservative hero overnight by making those promised cuts, not in ten years, not in five years, but now. A Speaker with the strength and resolve to do that would win the hearts and minds of Americans everywhere, regardless of his name or history. All it takes is courage.

It’s not as if Boehner would be going it alone on such a mission of principle. The 25 Republicans who voted against the Speaker, along with their constituents who tirelessly shut down Capitol phone lines, should serve as ample evidence that there would be popular and legislative support for a bold agenda of reform. The troops are assembled and ready for action, to shrink government and put an end to hundreds of billions in budget deficits.

The only way to bring about change is to be bold, fearless, and responsive to the voice of the people. We have an opportunity to do it now. Boehner has been given a green light by the members of his caucus. All he has to do is put his foot on the gas.

Adam Brandon is the executive vice president of FreedomWorks, a non-profit organization that mobilizes grassroots activists nationwide. Follow him on Twitter @adam_brandon