A delighted Mick Jagger just visited the Stalinist nation that criminalized his music and herded many of its listeners into forced-labor camps at Soviet-bayonet point as punishment.

The visit was reported by the proud Stalinist regime’s captive (literally!) press this week.

The exact purpose of the visit was not ascertained, but the Rolling Stones (renown for their tributes to black music and musicians) seem to be planning a concert sponsored by the lily-white regime that jailed and tortured the most and longest-suffering black political prisoners in the modern history of the Western hemisphere.

In fact, the Castroite jailing and torture of blacks took a nice uptick right during Jagger’s visit. 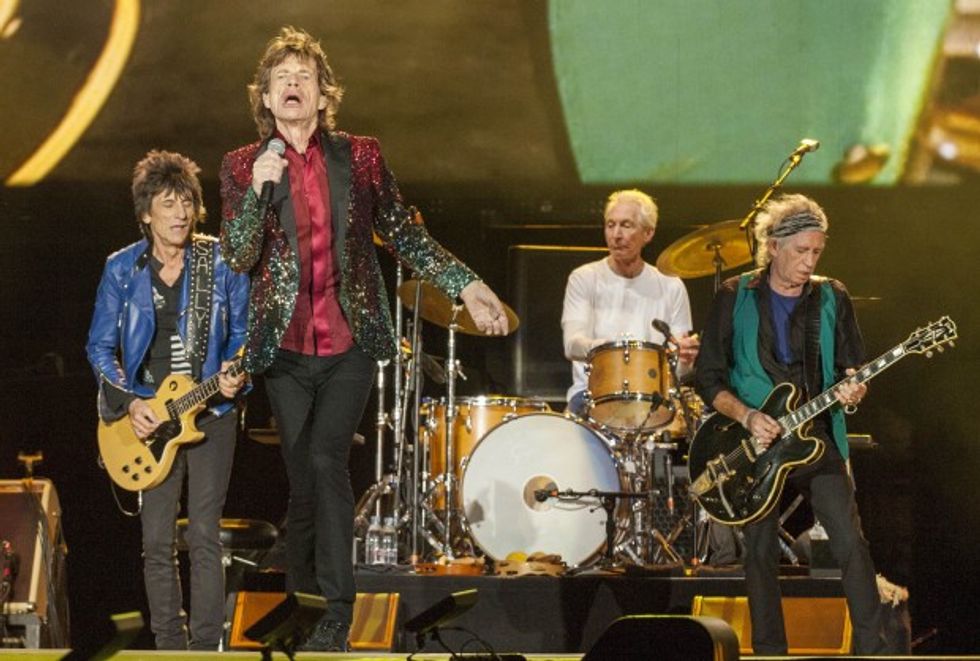 Back in 1985, Stones guitarists Keith Richards and Ronnie Wood proudly joined Artists United Against Apartheid and played on the ad-hoc music group’s anti-apartheid anthem titled "Sun City." The title of the album was taken from the Sun City resort in segregationist South Africa during the 1980s — though the resort itself wasn't subject to segregationist laws — with the goal of discouraging any performers from playing Sun City, said the project's organizers.

Accordingly, the very notion of performing in a venue tainted by association with a segregationist government horrified rockers like Richards, Wood, Bruce Springsteen, Bob Dylan, among many, many others. At the time Nelson Mandela was in a South African prison and his plight was a deafening and incessant worldwide, multi-media cause célèbre.

But such concern doesn't appear to exist when it comes to Cuba. Based on an interview with Spain’s El Mundo, Keith Richards seems thrilled to be planning a concert sponsored by the white Castro family’s Stalinist-apartheid regime, which jailed political prisoners (many black) longer than did South Africa and under much worse conditions. This Rolling Stones concert is certain to further enrich the racist Castro family and their lily-white military cronies who run the mostly black and mixed-race nation of Cuba.

During the mid 1960s, rock music was frowned upon in Castro’s Cuba as a “yankee-imperialist” subversion. Sure, here in America we had the much-dreaded and maligned (by liberals) Legion of Decency, Hay’s Code, Catholic League. etc. But the much-admired (by liberals) Castro regime went a bit further than finger-wagging sermons and government lobbying by a few church ladies. They even went further than Ed Sullivan, who issued a few admonitions before rockers took to his stage (as happened to the Rolling Stones in 1967.)

Instead, the much-admired (by liberals and hipsters) Castro regime simply rounded up Cuban “roqueros” (rock-music fans), long-hairs, blue-jean wearers, draft-dodgers and gays en masse and herded them into Soviet-designed forced-labor camps. "Work Will Make Men Out of You" read the sign in bold letters above the gate beside the machine gunners posted all along the watchtowers.

"These youths walk around with their transistor radios listening to imperialist music!" raved Fidel Castro in a 1968 speech. "They corrupt the morals of young girls — and destroy posters of Che! What do they think? That this is a bourgeois liberal regime? NO! There's nothing liberal in us! We are collectivists! We are communists! There will be no Prague Spring here!"

Yes, you read that right: long–haired youths were destroying images of Che Guevara!

"But how could such a thing be?” you might ask.

Easy. Unlike Bernie Sanders campaign volunteers, Occupy demonstrators and Lollapalooza attendees who cherish Che, for those actually forced to live under Che Guevara’s handiwork, the impulse for such vandalism becomes irresistible.

Actually, for a rocker, Mick Jagger is rather late in the game with his Cuba visit. When Fidel Castro invited Stephen Stills to perform in Cuba in 1979, the famous Woodstocker could hardly contain his elation. This fervent champion of human rights, civil rights and free speech (indeed Crosby, Stills, Nash and Young’s last tour in 2010 was titled “The Free-Speech Tour”) not only took up the offer to perform at this “Havana-Jam,” but also composed a song in Castro’s honor, titled “Cuba al Fin!”

Jazz master Paquito‘ d Rivera, still living in Cuba at the time, recalled watching Stills on stage at Havana’s Karl Marx theatre lovingly crooning the song to the families of Castro’s Stalinist nomenklatura as if Havana-Jam were a personal performance for the Soviet satrap himself. Within blocks of this cheeky concert, (which also included fervent human-rights activist Kris Kristofferson along with Billy Joel) Cuban youths — black and white — languished in dungeons suffering longer prison sentences than Nelson Mandela’s. The Cubans’ crimes were attempting free speech.

“They [Castro’s Stalinist regime] invited me because they knew I was politically astute,” gloated Stills, regarding the acumen and good taste of his Cuban hosts, who to this day jail Cuban youths for the crime of saying, “Down with Fidel!”

“You have to give them [Cuba’s Stalinists] due respect because they have a unique form of socialism that’s very significant in the scheme of world history,” Stills explained while explaining his Cuba visit.