Jeb Bush Says Trump May Turn Away GOP Women Voters: 'Do We Want to Win?

"Do we want to insult 53 percent of all voters?"

ATLANTA (TheBlaze/AP) — Donald Trump's bombast continued to roil the Republican presidential race Saturday, with several rivals criticizing his treatment of a Fox News debate moderator and the organizer of a high-profile political convention who rescinded the businessman's prime-time speaking slot in front of a thousand conservative activists.

The real estate mogul and reality television star remained unbowed, refusing to apologize for saying on CNN late Friday that Megyn Kelly, who aggressively questioned him during Thursday's GOP primary debate, had "blood coming out of her eyes, blood coming out of her wherever" when she asked him about his incendiary comments toward women.

At the least, the latest flare-up underscores the potential challenges Trump poses for his rivals as they struggle to react to him without deviating from their own message or alienating the conservatives who are enamored with his insurgent, unconventional bid. 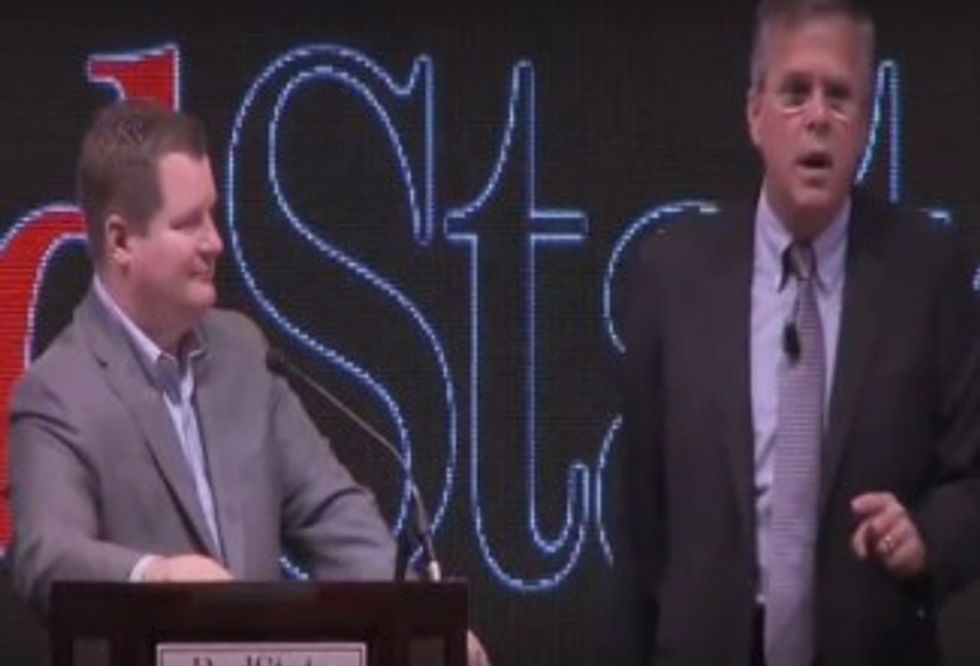 "Come on. Gimme a break," Bush said. "Do we want to win? Do we want to insult 53 percent of all voters?" the former Florida governor told the RedState Gathering in Atlanta, where Trump had been the headliner for an evening reception at the College Football Hall of Fame.

"What Donald Trump said is wrong," Bush continued "That is not how we win elections. And worse yet that is not how you bring people together to solve problems ... Mr. Trump ought to apologize."

The event's organizer, radio host Erick Erickson, offered similar sentiments when he booted Trump after his statements on CNN. "I just don't want someone on stage who gets a hostile question from a lady and his first inclination is to imply it was hormonal," Erickson wrote on his website, even as he acknowledged that Trump "resonates with a lot of people with his bluntness."

In a statement, Trump maintained that "only a deviant" would interpret his comments that way. He called Erickson "a total loser" with "a history of supporting establishment losers in failed campaigns."

Former tech executive Carly Fiorina, the only woman among the GOP contenders, took to Twitter: "Mr. Trump. There. Is. No. Excuse." She added, "I stand with @megynkelly."

Rick Perry, the former Texas governor, said Trump's behavior shows "a serious lack of character and basic decency" that should disqualify him from the race.

Even before Trump's latest Kelly comments, New Jersey Gov. Chris Christie told CBN News that Trump has "got a lot of skills, but I just don't think for this."

Yet Trump remains a towering presence in the 17-candidate field, and his supporters at the RedState event — along with several other uncommitted attendees — said the latest flap simply reaffirms why his uncompromising approach appeals to voters who are disgusted with conventional politicians, including those in the GOP.

"It sounds like Republicans want to cherry-pick someone as the nominee and they want everyone to fall in line," said Jane Sacco of New Port Richey, Florida, saying she was angry at Erickson's decision.

Another Trump fan, Louise Tashjian of Atlanta, added: "This is about political correctness. We don't like it when Democrats do it."

Dulcy Forte of Austin, Texas, countered that Trump's bigger sin was his refusal in the debate to pledge support to the eventual GOP nominee if it's not him. "I was always thought Donald Trump was a little crude, but, more importantly, he's not a good Republican," Forte said.

Still more attendees said they are not necessarily Trump supporters but want other candidates and party leaders to take heed of his rise.

Connie Thomas of Atlanta, executive of a health care consultancy, said Trump went "too far" in the CNN interview but is serving a "good purpose" in the race: "He's forcing the rest of this field to speak more forcefully, more clearly against the establishment."

Jack Staver, a business consultant from Woodstock, Georgia, said Trump's rivals could benefit from emulating his style, even if it gets him into trouble. "Quit being who everybody wants you to be, and be who you are," Staver said. "I haven't seen a lot of that in this campaign."

Some other candidates have at least tacitly acknowledged the tightrope they must walk with Trump's supporters.

Bush was the only one of a half-dozen candidates at the RedState gathering who mentioned Trump during his remarks on the podium. And in recent weeks, Bush has on several occasions differentiated Trump from his backers, whom he calls "good people."

Huckabee, even in his frustration Saturday, said Trump has "tapped into an anger" among the electorate. "I'm angry, too," he said.

Here's Bush's speech, along with a Q&A that followed. His comments about Trump come at the 28:30 mark: