It Makes Me Sick to Think What Happened': Minutes of Silence, March Mark Anniversary of Michael Brown's Fatal Shooting in Ferguson

"I looked at it like it could have been my sons or grandsons."

Michael Brown Sr. (3rd from left - front row) leads a march from the location where his son Michael Brown Jr. was shot and killed. The march followed a memorial service marking the anniversary of his death on August 9, 2015 in Ferguson, Missouri. Brown Jr, was shot and killed by a Ferguson police officer on August 9, 2014. (Image source: Scott Olson/Getty Images)
Dave Urbanski

FERGUSON, Mo. (AP) — One year after the shooting that cast greater scrutiny on how police interact with black communities, the death of 18-year-old Michael Brown in Ferguson, Missouri, was marked Sunday with 4½ minutes of silence and a march led by his father.

A crowd of hundreds that had gathered to commemorate Brown began their silence at 12:02 p.m., the time he was killed, for a length of time that symbolized the 4½ hours that his body lay in the street after he was killed. Two doves were released at the end. Police largely remained away from the ceremony. 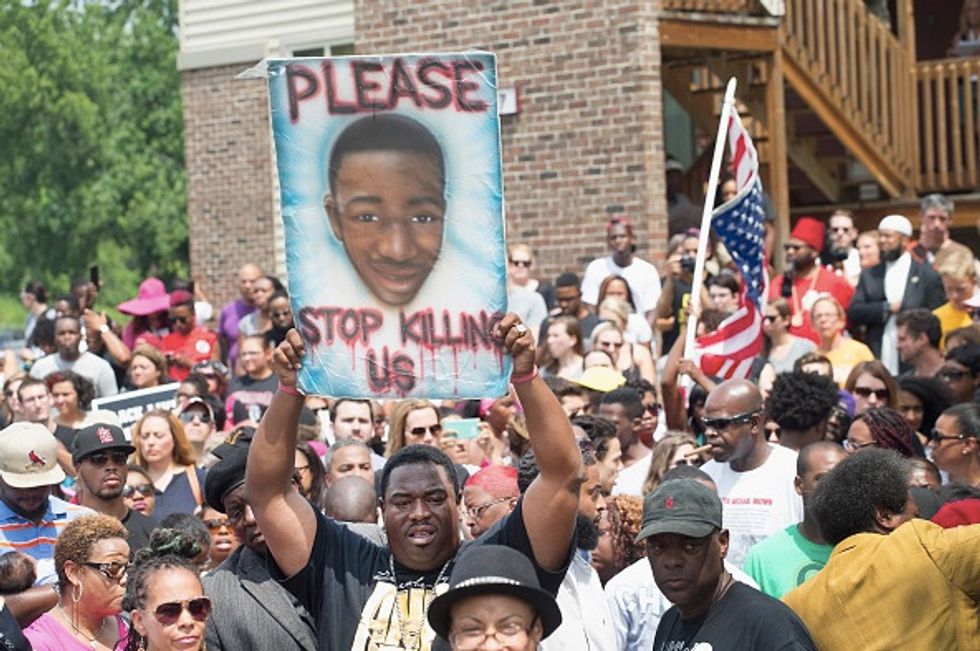 People gathered outside the Canfield Green Apartments where Michael Brown was killed listen to speakers during a memorial service marking the anniversary of his death on August 9, 2015 in Ferguson, Missouri. (Image source: Scott Olson/Getty Images)

Michael Brown Sr. held hands with others to lead the march, which started at the site where his son, who was black and unarmed, was fatally shot by Ferguson officer Darren Wilson on Aug. 9, 2014. A grand jury and the U.S. Department of Justice declined to prosecute Wilson, who resigned in November, but the shooting touched off a national "Black Lives Matter" movement.

Pausing along the route at a permanent memorial for his son, Michael Brown Sr. said, "Miss you."

He had thanked supporters before the march for not allowing what happened to his son to be "swept under the carpet."

Michael Brown Sr. had also led a parade involving several hundred people on Saturday. He said his family is still grieving, but he believes his son's legacy can be seen in the increased awareness of police shootings, and renewed skepticism when officers describe their side of events leading up to those shootings.

"It makes me sick to think what happened," she said, "I looked at it like it could have been my sons or grandsons."

Some who marched in the Saturday parade wore T-shirts with likenesses of Brown or messages such as "Please stop killing us" or "Hands up! Don't shoot!" which became a rallying cry during the sometimes-violent protests that followed the shooting a year ago. Some carried signs or wore shirts commemorating others who have been killed in confrontations with police. 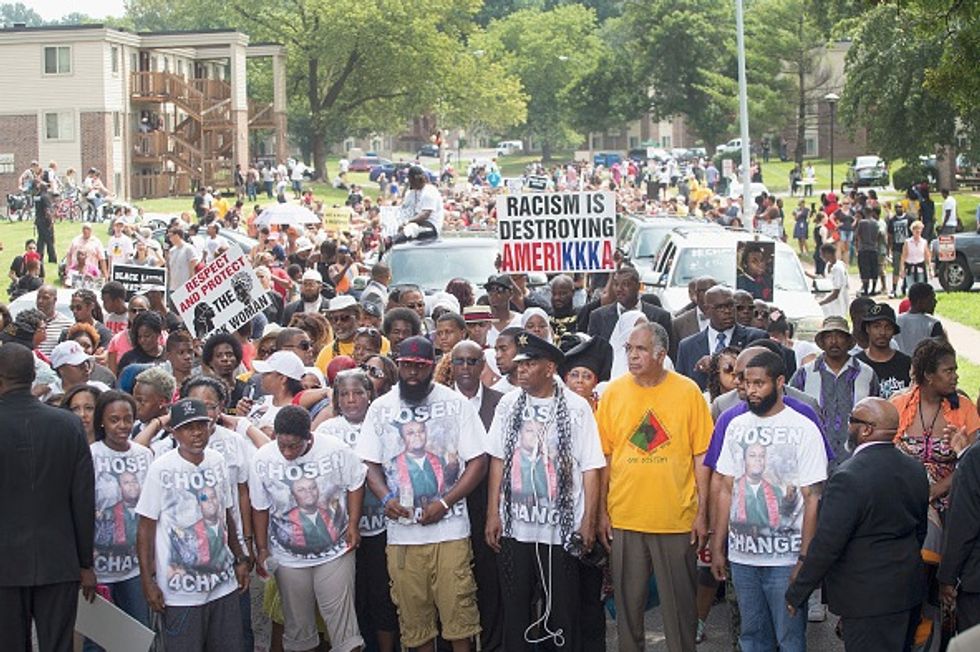 But the focus of the weekend is largely on Brown, who graduated from high school weeks before the shooting and planned to go to trade school to study to become a heating and air conditioning technician.

Relatives and friends described Brown as a quiet, gentle giant who stood around 6-foot-3 and weighed nearly 300 pounds. But police said Brown stole items from a convenience store and shoved the owner who tried to stop him on the morning of Aug. 9, 2014. Moments later, he and a friend were walking on Canfield Drive when Wilson, who is white, told them to move to the sidewalk.

That led to a confrontation inside Wilson's police car. It spilled outside, and Wilson claimed that Brown came at him, menacingly, leading to the fatal shooting. Some witnesses claimed Brown had his hands up in surrender. Federal officials concluded there was no evidence to disprove testimony by Wilson that he feared for his safety, nor was there reliable evidence that Brown had his hands up in surrender when he was shot.

The shooting led to protests, some violent, and the unrest escalated again in November when a St. Louis County grand jury determined that Wilson did nothing wrong. He resigned days later. The November riots included fires that burned more than a dozen businesses.

The Justice Department reached the same conclusion in March, clearing Wilson. But in a separate report, the Justice Department cited racial bias and profiling in policing as well as a profit-driven municipal court system that often targeted black residents, who make up about two-thirds of Ferguson's populace.