"Just like they spy on muslims, we are spying on them"

A representative for a pro-Islamic State hacking group issued a chilling warning to members of the U.S. military and government Wednesday, promising that "very soon" followers of the organization would retaliate for overseas bombing targeting the terror organization.

"Just like they spy on muslims, we are spying on them, watching their employees, watching their soldiers, recording their movements and taking their location information and passing it on to the soldiers of the islamic state," the anonymous male member told TheBlaze.

"they have no security just like their employees and military personnel have no OpSec," he continued, "they are people who like to brag and boast and this is to our advantage." 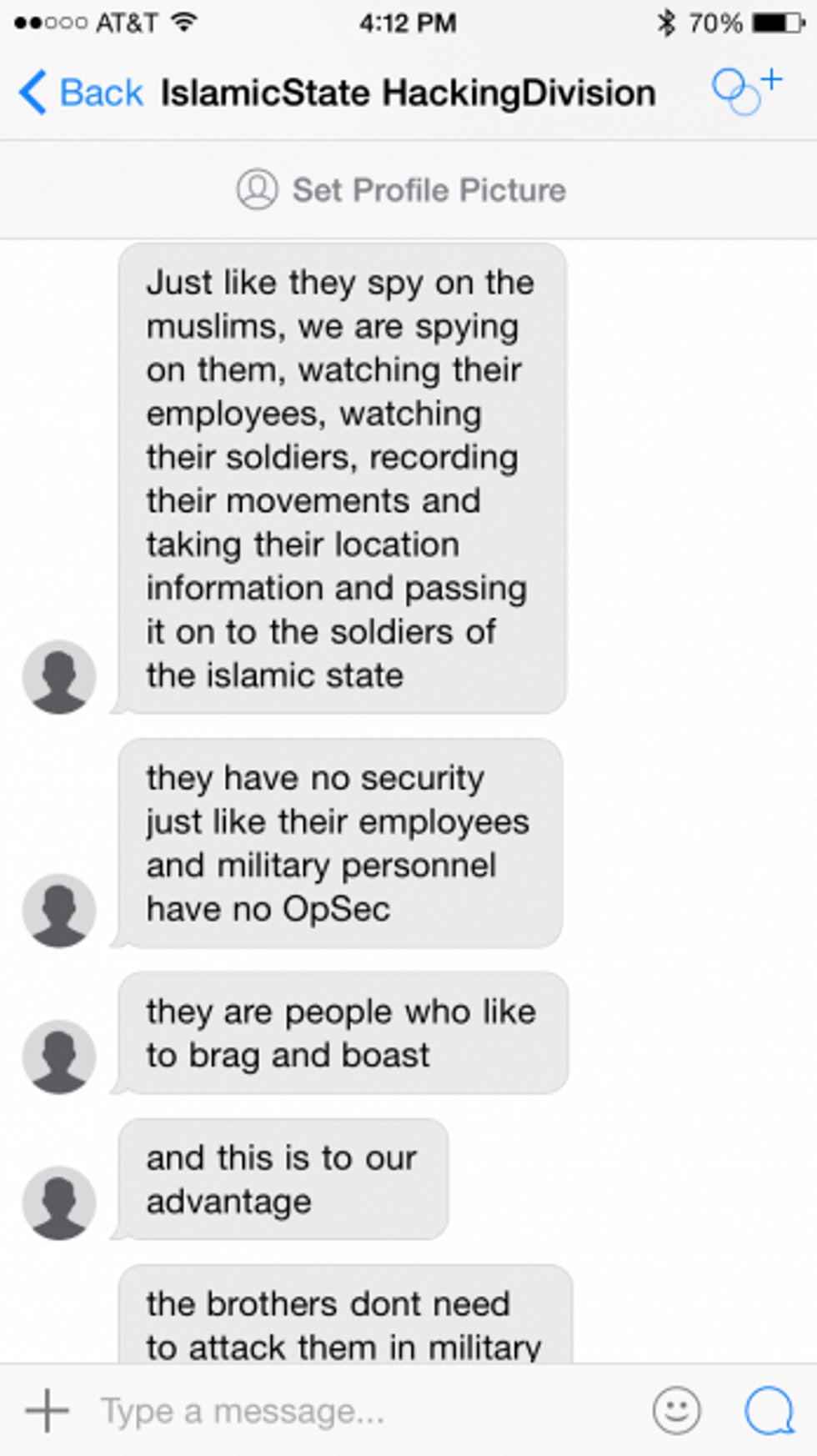 "the brothers don't need to attack them in military bases or secured buildings," the hacking group member added. "they can now turn up in their houses. in their homes. this is war, what did you expect? u think u can bomb the islamic state and we don't do nothing back? soon, very soon you will see."

When asked exactly what could be expected to be seen "soon," the member replied, "you will see when US military and government personnel start getting beheaded in their homes." 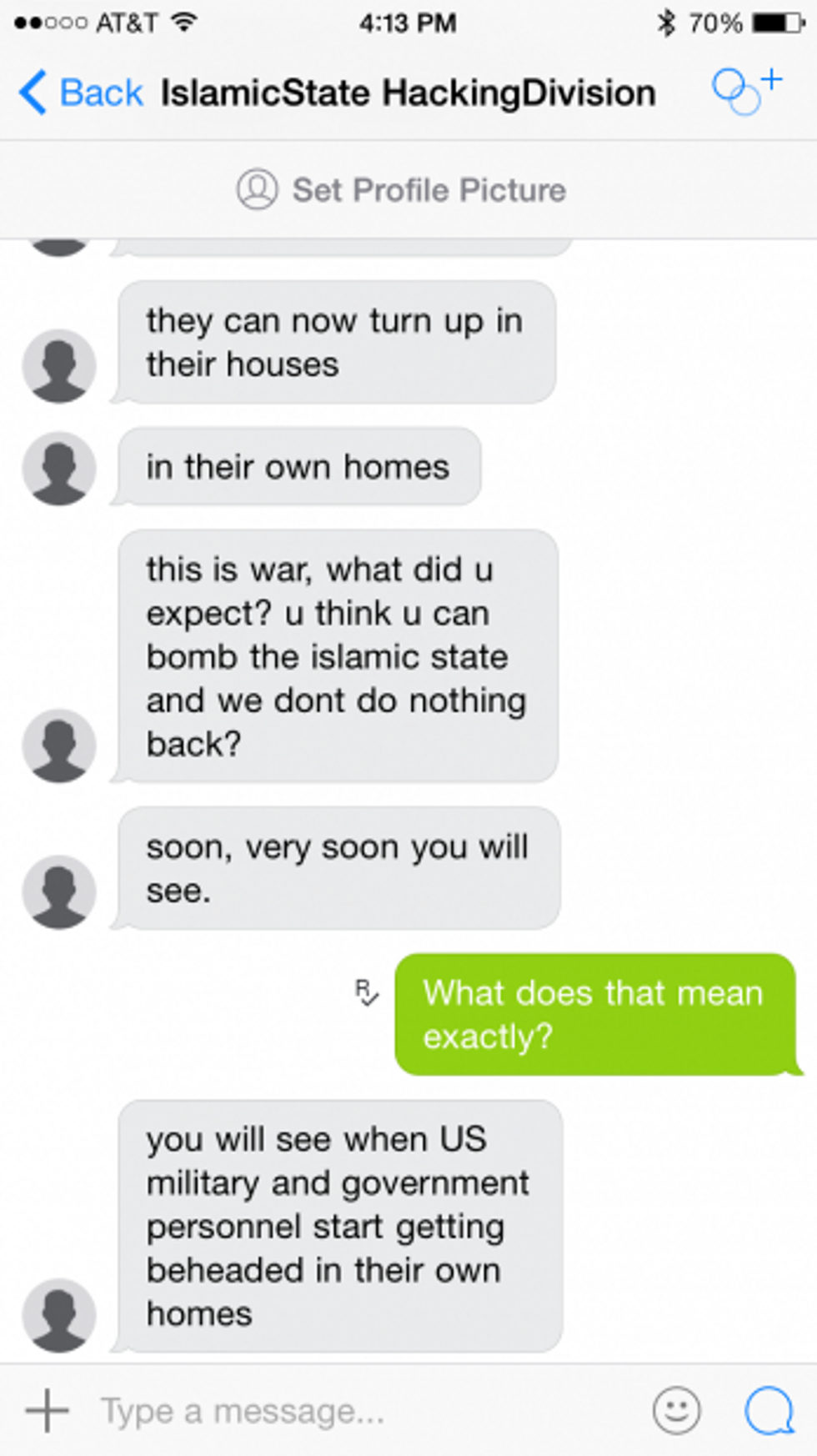 The individual said that his group targets government employees as well as military members because "their kufr (disbelief) makes their blood halal."

The individual would not provide specifics on the Islamic State Hacking Division, declining to say where the group is based or how many members are in its ranks. He did, however, go after Anonymous, the hacking group which recently targeted the Islamic State.

"Anonymous, GhostSec, CtrlSec who are apparently 'hackers' against IS, till date they have hacked nothing, they are all talk," the Islamic State Hacking Division member said. "the only thing they can do is report twitter accounts and ddos websites for 5mins."

Boasting of the group's own skill set, the individual claimed his group "probably" could have breached security guarding the private email server of Democratic presidential candidate Hillary Clinton. He, however, declined to get into the group's specific methodology, saying, "Let the US gov figure that out."

Department of Defense cyber-mobile and cyber-warfare expert Robert Twitchell said he thought the group could indeed have the capabilities to launch various hacking attacks that could result in information being compromised.

Former intelligence analyst Jason Polancich, however, said his view was that the pro-Islamic State group was mostly bluffing and that often information hactivist groups use is already available online.

A spokesman for the Pentagon said Wednesday afternoon that officials are still investigating the purported hack, but noted that "it appears all of the email addresses for the Army soldiers are old and haven't been operational for months, if not years."

Before Tuesday's alleged hack, the group in March claimed to have posted the information of 100 U.S. military personnel with a call to “kill them in their own lands.”

The representative for the Islamic State Hacking Division group was reached using contact information posted on the same website it used to publish the purported information of U.S. military and government personnel.