"I think it was really effective."

MINNEAPOLIS (AP) -- The Mall of America was used as "a decoy" to start a protest that quickly moved to Minneapolis-St. Paul International Airport and blocked a terminal on a busy holiday travel day, one organizer of the demonstration said.

Access to one of two terminals was closed after more than 100 protesters gathered inside and blocked roads leading to the airport Wednesday, airport spokesman Patrick Hogan said. He said the protest caused some flight delays but no cancellations. 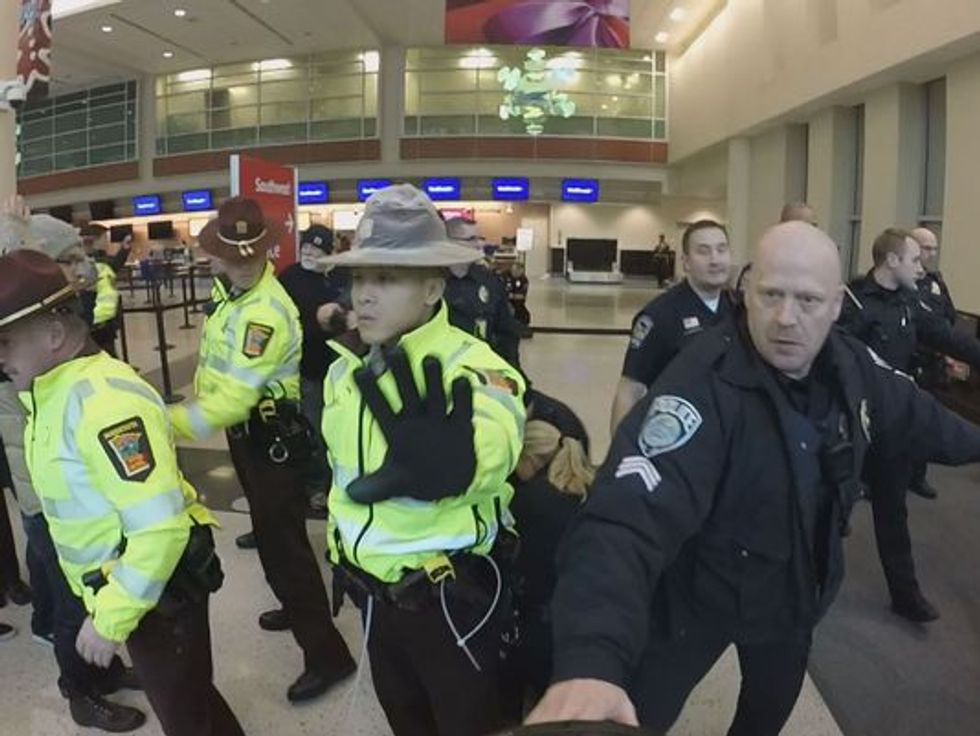 Protesters hoping to draw attention to the police shooting last month of a black man in Minneapolis had described in advance their plans to target the mall, but not the airport. They started at the shopping mecca in suburban Bloomington, where there was a heavy police presence, then took a light-rail train to the airport.

"The mall was a decoy," said Black Lives Matter organizer Miski Noor, who protested at the airport. "I think it was really effective."

Police said a total of 15 people were arrested at both sites, mostly for trespassing or obstruction of justice. No injuries or property damage were reported. Officials said that traffic at the airport was back to normal by Wednesday evening and that about 80 stores at the mall were closed for about an hour as officers escorted protesters off the property.

"We accomplished exactly what we came here to accomplish - we wanted to shut down the highway, shut down the airport and show solidarity with other Black Lives Matter groups," Michelle Barnes of Minneapolis, one of the protest organizers, told the Star Tribune.

Dayton questioned the need for such a demonstration, noting that federal and state investigations were ongoing into the death of 24-year-old Jamar Clark, who was fatally shot by Minneapolis police responding to an assault complaint. The governor said releasing video of officers' altercation with Clark, as demanded by protesters, could jeopardize the investigations.

Before protesters gathered at the mall, stores temporarily closed their gates, kiosks were covered and even Santa left his sleigh. Numerous signs were posted saying no protests were allowed - including a long message on a screen in a central rotunda between two Christmas trees.

That didn't deter Art Seratoff, a 67-year-old protester from Minneapolis.

About 500 protesters briefly gathered at the mall before abruptly walking out while chanting, "What do we want? Justice! When do we want it? Now!" The crowd then headed to the light-rail station and onto the airport.

A similar demonstration at the Mall of America last December drew hundreds of protesters angry over the absence of charges following the police killings of unarmed black men in New York City and Ferguson, Missouri. Stores in the mall had to close, and dozens of people were arrested.

The massive retail center houses an amusement park and more than 500 shops spread across four floors, attracting shoppers from around the globe.

Neither mall officials nor Bloomington police said what security measures were put in place to prepare, though special event staff searched bags at every mall entrance before the rally. Security guards cordoned off parts of the central rotunda, and officers from several cities patrolled inside.

The mall had sought a court order blocking the planned protest. A judge on Tuesday barred three organizers from attending the demonstration, but said she didn't have the power to block unidentified protesters from showing up.

Mike Griffin, who joined similar protests last year, said his flight to Chicago was among those delayed.

"While I'm delayed an hour and half to get back to my family for Christmas, I know there are several black families mourning the loss of innocent black men," said Griffin, a 29-year-old from Minneapolis. "My mom is a little bit annoyed, but she's going to see me this holiday season."