Despite video, much remains in dispute about Tulsa shooting

People hold signs at a "protest for justice" over Friday's shooting death of Terence Crutcher, sponsored by We the People Oklahoma, in Tulsa, Okla., Tuesday, Sept. 20, 2016. (AP/Sue Ogrocki)
Jon Street

But what actually transpired on the Tulsa street between Terence Crutcher and officer Betty Shelby remains murky. 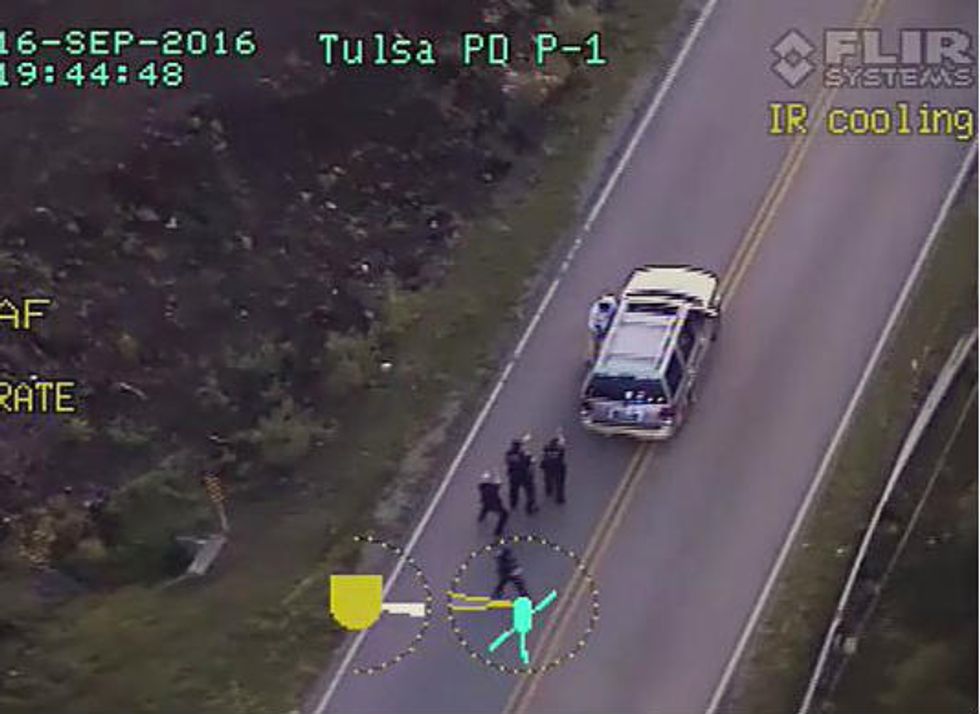 What the videos show

Two different views - one from a police helicopter and the other from officer Tyler Turnbough's dashboard camera - provide the most illuminating footage. They both show the 40-year-old Crutcher walking with his hands in the air toward his SUV, which is stopped in the middle of the street and straddling the center line. A female officer is following him.

As Crutcher approaches the driver's side of the SUV, more officers walk up and Crutcher appears to lower his hands and place them on the vehicle. A man inside a police helicopter overhead says: "That looks like a bad dude, too. Probably on something."

The officers surround Crutcher - blocking a clear view from the camera - and he suddenly drops to the ground. Someone on the police radio says, "I think he may have just been tasered." Then almost immediately, a woman's voice yells on the police radio: "Shots fired!" Crutcher is left lying in the street.

The officers slowly back away. Crutcher, his white shirt stained with blood, lies on the ground alone and unattended for nearly two minutes before an officer puts on medical gloves and begins to examine him.

Emergency medical responders arrive about four minutes after he is shot.

What the videos don't show

The videos don't show what happened when Shelby first encountered Crutcher and the roughly two minutes that follow before other officers arrived.

No dashcam footage exists from Shelby's car because she didn't activate her emergency lights - which in turn switches on the camera - when she came upon the abandoned vehicle in the roadway. No body camera footage exists, because Tulsa police have not implemented the devices for officers, despite receiving a federal grant to do so last year.

Also absent is audio that could have captured exchanges between Crutcher and Shelby. A 911 caller reported an abandoned SUV, left running in the middle of the road with the driver's side door open. Shelby, en route to a domestic violence call, encounters the abandoned vehicle and eventually radios into dispatch, "Hold traffic. I got a subject who won't show me his hands," but nothing captures what went on between Shelby and Crutcher prior to other officers showing up.

In dashcam and aerial footage, all doors of Crutcher's SUV are closed, so there is no view of what is inside.

There's no close-up, unobscured view of Crutcher before Shelby fired the fatal shot.

What police have said

A Tulsa police spokeswoman initially told reporters that Crutcher refused requests to put his hands in the air. After the footage was released Monday suggesting otherwise, spokeswoman Jeanne MacKenzie said she was relying on reports from officers at the time.

Tulsa Police Chief Chuck Jordan said Monday that Crutcher did not have a gun on him or in his SUV. He promised a thorough investigation.

Police have held back many details in the case, citing the investigation, but Sgt. Dave Walker confirmed Tuesday that investigators found the drug PCP in Crutcher's vehicle. Also Tuesday, Sgt. Shane Tuell confirmed Shelby had a stun gun at the time but did not use it.

What the officer's attorney has said

Shelby's attorney, Scott Wood, has told the Tulsa World the situation unfolded for nearly two minutes before the police footage started. He said Crutcher repeatedly ignored Shelby's commands and didn't respond to her questions. He said Crutcher reached toward his pockets or into them several times against Shelby's orders not to do so.

Wood said Shelby has completed drug-recognition expert training and thought Crutcher was acting like he might be under the influence of PCP.

Shelby was concerned about Crutcher reaching toward his pockets because a person with a weapon often touches it to make sure it's still there, Wood said.

He said she drew her handgun after Crutcher walked toward the police car's passenger side and started to put his hand in his left pocket. He said she radioed dispatch to report that she was with someone who wasn't complying with her demands.

Wood said Shelby cleared - or checked - the SUV from the driver's side and was about to clear the passenger side when Crutcher approached from the east. Another officer arrived and drew his stun gun, the lawyer said, adding that the stun gun and handgun were fired simultaneously because both officers perceived the same threat.

He said Crutcher's head was tilted but his eyes were on Shelby. Wood said Shelby recalled Crutcher mumbling incoherently when she asked him if the SUV belonged to him.

What the family and their attorneys have said

The family and their attorneys say the video clearly shows Crutcher wasn't threatening the officers. The attorneys also provided an enlarged photo from police footage that appears to show the SUV's window rolled up, which would contradict Shelby's claim that Crutcher was reaching inside his vehicle.

Whether Crutcher possessed or used drugs is also irrelevant, the lawyers said.

Crutcher was a church-going man and a father of four who was gunned down for being "a big bad dude," his twin sister, Tiffany Crutcher, has said, referring to the "bad dude" comment from the police helicopter footage.