Tucker Carlson assailed the media for their obsession with race and identity, and the hypocrisy they had in labelling Bannon a bigot and a racist. He made the comments Friday on his Fox News show.

"A senior White House advisor Steve Bannon got canned today after losing an internal power struggle that had been raging for months," he began. "Like his now former boss, Bannon was a mercurial figure in a business that prizes predictability. To steal cliches from a hundred different cop movies, he was a loose cannon who didn't play by the rules. Bannon fanned fruitless controversy with unwise remarks, he specialized in making enemies. The White House will be a much more placid place now that he is gone. The question is, will it be a better place?"

"Let's put it this way," he added, "Bannon was one of the relatively few senior staff in the white house who wouldn't feel at home in a Hillary Clinton administration. Indeed, he was one of the rare republicans there and the only, or one of the very few, populist conservatives."

"That's strange," he noted, "since populist conservatism is the platform his boss ran on. Like Trump the candidate, Bannon was willing to criticize big Republican donors in their ideological stranglehold on a corrupt GOP establishment. He was able to break with orthodoxy in big and dramatic ways, calling for higher taxes on the investor class, better infrastructure, fewer pointless wars around the world, and more."

"Bannon understood that the country's greatest crisis isn't Robert E. Lee statues but the steady economic and moral decline of its once robust middle-class," he continued. "Not surprisingly, traders on Wall Street cheered when he got fired this afternoon. The Dow shut up 100 points on the news. Lobbyists in Washington will be celebrating late into the night."

"The funny thing is, that in some important ways, Steve Bannon was more traditionally liberal than the liberals who spent the last year shrieking for his head," Carlson continued. "Not that you would know that from the coverage, everything is identity politics now, so his ideological opponents attacked Bannon from the very beginning as a bigot."

"It was always a ludicrous charge," he added. "Bannon is a flawed guy, but not in that way. Just yesterday he called white nationalists 'buffoons and losers.' It's not Steve Bannon who is obsessed with race and identity, it's the activist left and the morons who do their bidding in the media."

.@TuckerCarlson: Bannon One of Few in #Trump WH that Wouldn't Be 'Comfortable' Working for Hillary https://t.co/PflxBqHdZ2 | #Tucker pic.twitter.com/nSlzQHtahB

"There was never any real attempt in the press to understand or critique what Bannon was saying," Carlson continued later, "ideas and policy are not interesting to reporters, mindless tribalism is, so that's what they cover. This is toxic, it obscures the issues that actually matter."

"Instead of looking at real problems like rampant drug addiction or economic inequality, and those are real problems, and trying to find solutions to them, the left is obsessed with finding and enjoying destroying the imagined racists in our midst," he said.

"With Bannon gone, they will move on to somebody else, and they will," he concluded. "Say when you about Steve Bannon, you can see a lot a lot, but he never forgot why Trump got elected in the first place and in a democracy that is not a small thing."

"Bannon kept an office full of campaign promises. It's probably all ready been taken down by now," Carlson said ruefully.

Bannon almost immediately went back to his position at Breitbart News after being fired, and in an interview said that the presidency he had fought for and won was over. He vowed to keep fighting for the Trump agenda from outside the administration. 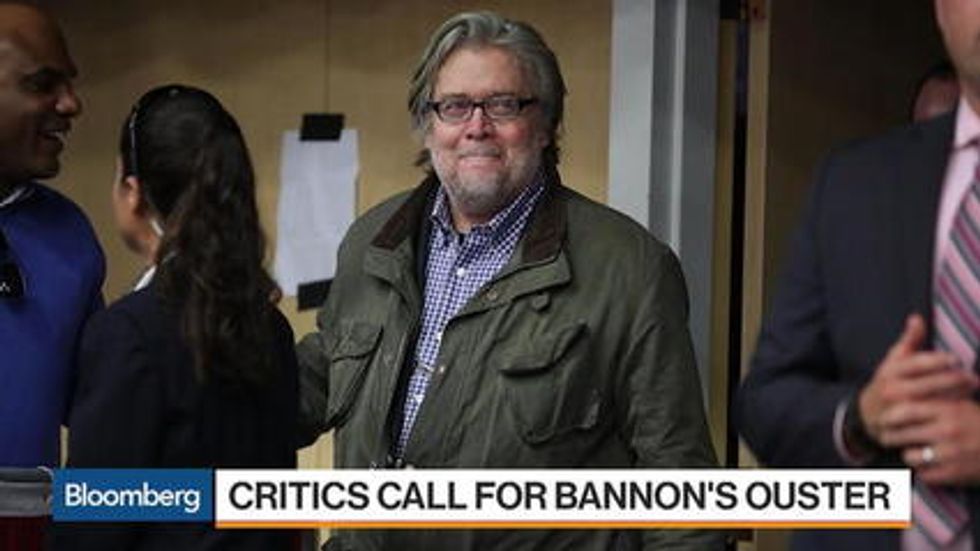