US has the highest rate of single-parent households, study finds, foreshadowing grim prospects

Phil Shiver
December 16, 2019
F. Scott Schafer/Walt Disney Television via Getty Images
Like Blaze News? Get the news that matters most delivered directly to your inbox.

A recent study from Pew Research Center revealed that the United States has the highest rate of children living in single-parent households in the world.

The study, which analyzed 130 countries around the world based on the criterion of the number of children living with one parent and no other adults, found that the U.S. had the highest share of single-parent households at 23 percent.

Pew's report on the study stated:

Almost a quarter of U.S. children under the age of 18 live with one parent and no other adults (23%), more than three times the share of children around the world who do so (7%). The study, which analyzed how people's living arrangements differ by religion, also found that U.S. children from Christian and religiously unaffiliated families are about equally likely to live in this type of arrangement.

Though the runner-ups are also Western nations with higher-than-average rates — such as Denmark (17 percent), France (16 percent), and Ireland (14 percent) — the U.S. has a significantly higher margin of single-parent households than all of the other nations, outside of the United Kingdom. (21 percent). 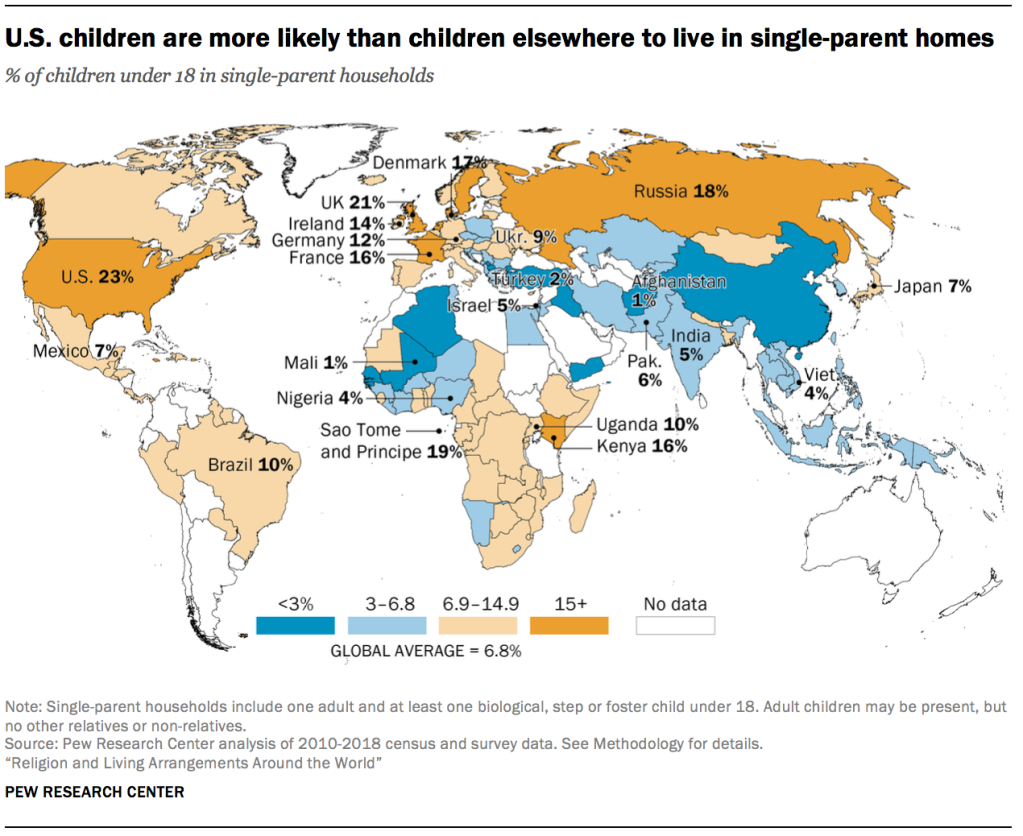 Pew said the results are due in part to "a decline in marriage rates and a rise in births outside of marriage" in the U.S.

A similar study Pew conducted last year found that one-third of all U.S. children are living with an unmarried parent, a figure that has nearly tripled since 1968 rising from 13 percent to 32 percent. (The data included unmarried "cohabiting" parents, which accounted for the 32 percent figure.)

The Washington Free Beacon suggested the study's results are in direct correlation to the Western world's move away from traditional family structures, citing the steady decline of two-parent homes in the U.S.

"America's top spot has been a long time coming," the Free Beacon report added. "Data from the U.S. Census Bureau shows in 1960, just 9 percent of U.S. children lived with one parent."

In 60 years, that number has nearly tripled, as well.

What does this mean?

Though many still debate the notion, several studies have shown that family structure is an important factor in a child's future success, if not the most important predictor.

"The single strongest predictor of a child's economic fortunes is the fraction of single parents in the area where she grew up," The Atlantic reported on a Harvard social mobility study.

In that study, researchers concluded that "the fraction of children living in single-parent households is the strongest correlate of upward income mobility among all the variables explored."

NYC mayor is 'deeply contemplating' taking a busload of New Yorkers to Texas to campaign against Gov. Greg Abbott

Want to feel stronger at 60 than at 30? Top expert says do this One thing

Glenn Beck: "We HAVE to teach real history to our kids before it's too late!

New details leak about FBI's shock raid on Mar-a-Lago — and GOP leader fires back at AG Garland: 'Preserve your documents and clear your calendar'

Chris Christie shuts down ABC News anchors with reality check when they try to defend Biden: 'This is ridiculous'

Man attacked a woman with a hammer, shot her in the face and then abducted her 10-year-old daughter, police say