Half of Americans still say the Bible should influence our laws: poll

Chris Field
April 19, 2020
Photo By Sarah Silbiger/CQ Roll Call
Like Blaze News? Get the news that matters most delivered directly to your inbox.

The Word of God has long played a role in the United States. It is part of our founding and has influenced much of our laws.

A poll from the Pew Research Center shows that half of Americans still want the Bible to have at least some influence on laws of the U.S. And when the will of the people comes in conflict with the Bible, more than a quarter side with having the Bible hold influence.

What did the poll say?

Broken down by faith, 68% of Christians, 31% of Jews, and 21% of "unaffiliated" — including 4% of atheists — said the Bible should have influence on our laws. Among Christians, 76% of Protestants and 51% of Catholics held this views.

Not surprisingly, when broken down further, white Evangelicals were the most likely group to support Biblical influence on U.S. laws at 89%.

Black Protestants came in second at 76%.

Of course, there was a major discrepancy between the two major political parties. Republicans were twice as likely to say the Bible should have influence on U.S. laws. Two-thirds of Republicans (67%) agreed with that stance, compared to 33% of Democrats (the party that famously "booed God" when debating the party platform in 2012).

Age also a played a factor: The older the respondent, the more likely he was so side with keeping the Bible as an influence. Sixty-four percent of adults 65+ held that view, while 30% of adults ages 18-29 said the same. 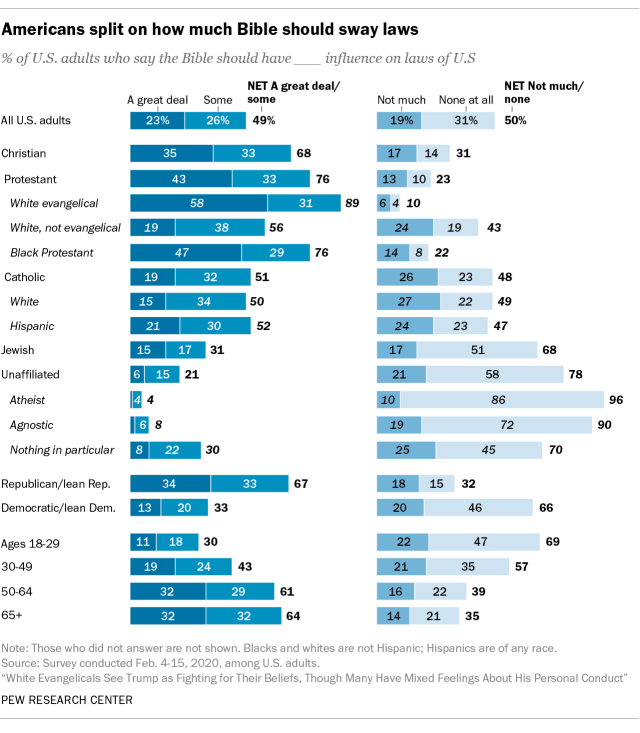 And when the Bible and the will of the people conflict, what then? Which should have more influence?


More than a quarter of Americans (28%) say the Bible should have more influence, 19% said will of the people. 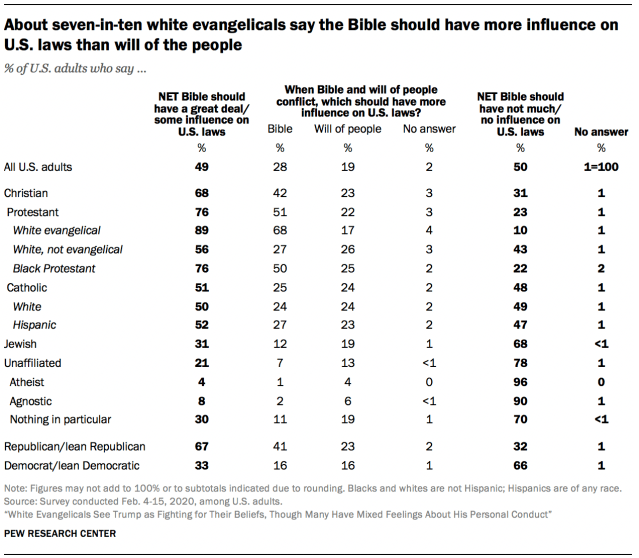 Backlash hits Chris Wallace after he calls Jen Psaki 'one of the best press secretaries ever': 'You're a clown'

Bill Maher fires back at woke mob angry over Dave Chappelle's comedy special: 'Where does this insanity come from?'

Joe Rogan roars back at CNN for doubling down on 'horse dewormer' narrative, calls Don Lemon a 'dumb motherf*****'

Jen Psaki triggers swift mockery after reporter grills her about Biden's border visit: 'I thought this was satire'

Police: Coordinated mob of juvenile criminals — some as young as 12 — traveling across state lines to commit violent crimes in Delaware Valley