Hockey coach's viral speech to players: If you disrespect national anthem, 'get the f*** out now'

Amid controversies coming from the World Cup-winning U.S. women's soccer team — namely star player Megan Rapinoe ignoring the national anthem during the World Cup as an "f-you" to President Donald Trump and teammate Allie Long dropping an American flag between her legs and taking part in a celebratory dance after the final match — one U.S. coach isn't standing for any such disrespect.

John Krupinsky is an assistant coach for Connecticut minor league hockey team the Danbury Hat Tricks, the Hill reported — and a video of him talking to the team in the locker room on the first day of camp has gone viral.

"We're not women's soccer. We're not the NFL," Krupinsky said. "If there's anybody here who's gonna be disrespectful to either the American or the Canadian national anthem, grab your gear and get the f*** out now 'cause you'll never see the ice in this arena."

Krupinsky added, "We don't have that problem in hockey. We're better than that, but there's no sense in wasting anybody's time if that s**t was going to happen. I don't believe it would happen here. We're the most patriotic sport they have out there."

The clip of the coach's speech has been viewed more than 5 million times since it was posted on Facebook last Tuesday. (Content warning: Language):

What else do we know about Krupinsky?

Krupinsky also is a sergeant with the Danbury Police Department and is president of the Connecticut State Fraternal Order of Police.

In February he spoke up after a Thin Blue Line flag was taken down from inside the Capitol in Hartford amid concerns it represented hate and opposition to the Black Lives Matter movement, WTIC-TV reported.

"The problem here is people don't understand what is the true meaning of that flag," Krupinsky told the station. "Thin Blue Line was out way before Black Lives Matter, Blue Lives Matter, any of these associations. This is something that goes way back." 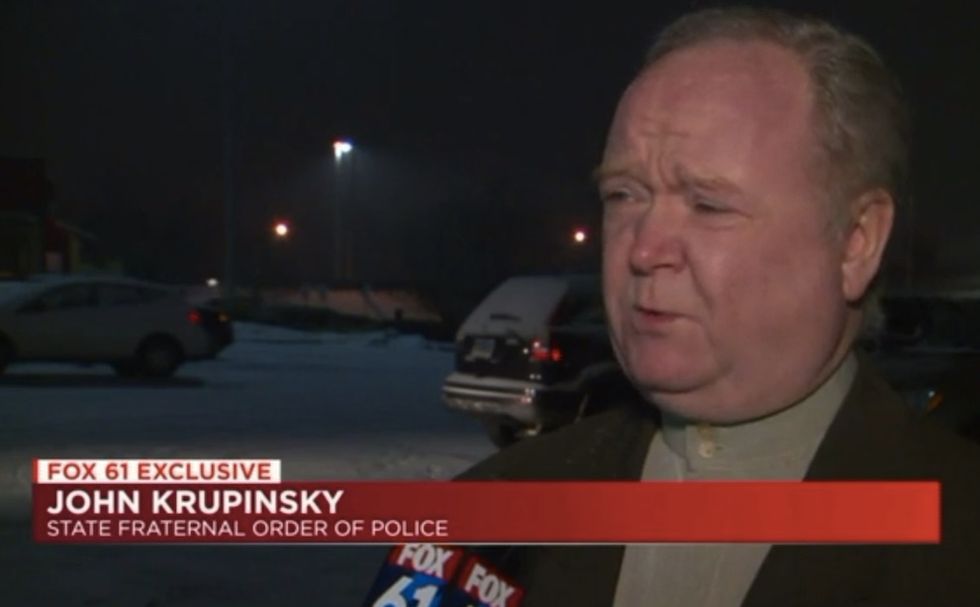 "Having had conversations with John, I was a bit more educated on the differences between the flags," McGee told the station, adding that while he doesn't know who removed the flag, he did hear from individuals with concerns but will work on getting the flag back up on the Capitol wall.

The pair also said they will work on educating others, WTIC said.