More churches are returning to a pre-pandemic normal, but people aren't coming back

News
Chris Pandolfo
March 28, 2022
ChristinLola via Getty Images
Like Blaze News? Get the news that matters most delivered directly to your inbox.

With COVID-19 cases decreasing and pandemic restrictions lifting all over the U.S., many churches and other houses of worship have returned to their pre-pandemic services. But that return to normal has not corresponded with worshipers returning for in-person services, according to a recent Pew Research Center survey.

The survey asked U.S. adults who say they attend religious services whether their house of worship is currently open and holding services the same way it did before the COVID-19 pandemic. A new high of 43% of respondents say their congregation has returned to normal services, which is an increase of 14 percentage points in the last six months and 31 points since last March.

A larger plurality of 47% say their church or house of worship is open, but with some modifications like mask requirements or social distancing still in place because of the pandemic. Only 5% of respondents said their place of worship is still closed. According to Pew Research, the number of U.S. worshipers who say their congregation is open for in-person worship has not increased over the last six months, but fewer people say their services include COVID-19 precautions. 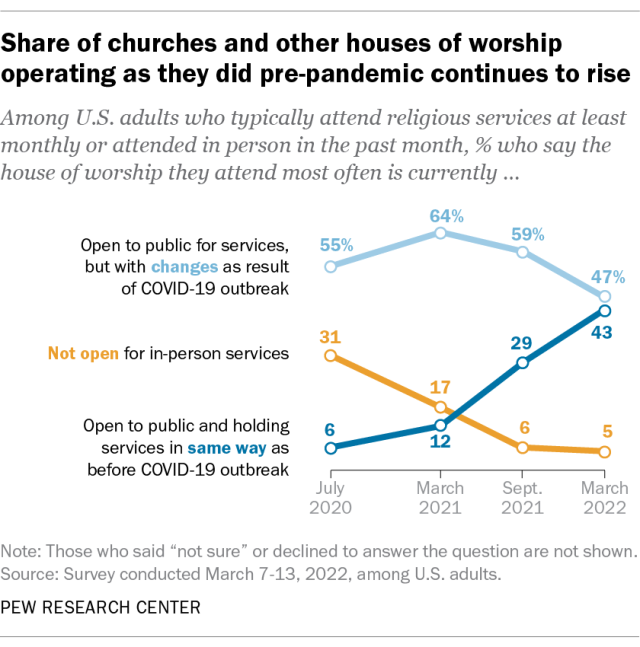 But even though many churches are open for worship under normal conditions, the number of people attending worship in-person has not changed since fall, following a period of growth between July 2020 and September 2021.

In July 2020, four months after "15 days to slow the spread," only 13% of U.S. adults told Pew Research they had attended religious services in person during the previous month.

About 27% of U.S. adults now say they attended a religious service in person during the previous month. That's not much more than the 26% who reported the same in September 2021 and 17% in March 2021.

At the same time, the number of Americans who say they have streamed religious services online or watched them on TV in the past month fell from 36% in July 2020 to 28% in September 2021. Now that figure stands at 30%. 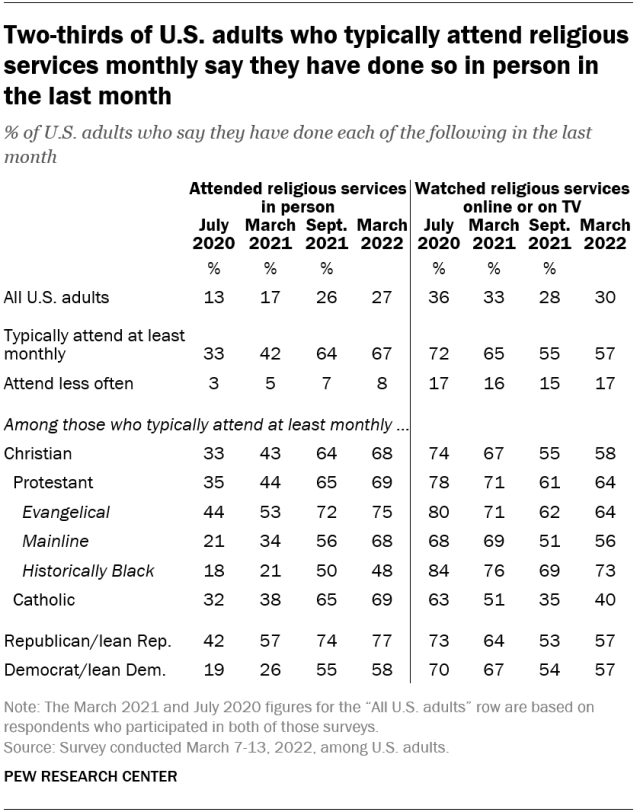 Regular church attenders are more likely to be physically present at worship services. Nearly one-third of U.S. adults, 32%, say they typically attend religious services at least once or twice a month. Of this group, 67% report they have attended an in-person service in the last month, while 57% say they have watched services online or on TV during that period.

There were noteworthy differences in church attendance among Christian denominations.

Protestant congregants of historically black churches were the group most likely to have only watched religious services online or on TV in the last month, without about one-third (35%) reporting they had done so. They were also least likely to say they had attended church services in person in the last month (48%) compared to evangelical Protestants (75%), mainline Protestants (68%), and Catholics (69%).

Mainline Protestants have seen the largest rise of in-person attendance since September 2021, when 56% reported attending an in-person service in the previous month. Now 68% report attending church in-person in the last month, a 12-point increase.

The first shipment of America's history going out this week! Be the first to get it. Special offer.

What are YOU viciously loyal to? Your beliefs? Your family? Your community? Your country?

Rand Paul has a plan to balance the federal budget - but will it work?

'The absolute dumbest time to be alive': Toronto Police Service announces 'Missing Woman' described as having a 'full goatee'

93-year-old homeowner shoots, critically wounds intruder after crooks kick in his door, attack him: 'I kept telling them I have a shotgun'

Biden makes an extreme abortion demand, but there are two problems