I Wasn't Cut Out To Be A Father

I wrote something about my kids on Facebook a few days ago, and in response I received this message:

Matt, your post about your kids was funny. You seem to really have this fatherhood thing figured out. I wanted to ask you a question about that. My wife is pregnant with out first child and I am worried. I feel like I am not cut out for this. I'm not sure that I'm dad material. I'm not sure I'm meant to be a father. We weren't planning on this kid. But here we are. The thing is that I really enjoy my free time and we had looked forward to taking trips and things together. All of that seems to be out the window now. I don't know if I can be a dad. I'm not the "fatherly" type. I'm really not sure how we can fit a kid into our lives right now. I guess I'm just wondering how you knew that you were cut out for this.

First of all, congratulations.

Second, don't assume that anyone has anything "figured out" just because you see their pictures on Facebook.

Third, take a breath. Everything will be fine.

Fourth, I get it. I wasn't sure if I was Dad Material, either. I always thought there should be some way to test for it. Like maybe they could take a blood sample or something. "Your results are in. Your cholesterol looks fine but unfortunately you came back negative for Dad Material." They could use that same test for Mom Material, Wife Material, Husband Material. Maybe even College Material, if medicine has advanced that far.

Alas, no such test exists. We just have to dive in headfirst, blind, dizzy, discombobulated, not even sure if there's water below. And if there is water, not sure that we can swim. Billions of other people have swam in this pool before us and survived, but still we're terrified that we might drown. We're fooled by our fears into selling ourselves massively short. And the culture is there the whole time legitimizing those fears, gloomily informing us that parenthood is an impossible and miserable task, and we ought to do everything in our power -- up to and including murder -- to avoid it.

As usual, our culture is wrong, and so are our fears.

You say you're not dad material because you like your freedom, you enjoy having time to yourself, and you want to go on trips and vacations and so on. I'm with you. I, too, am rather fond of freedom and free time and vacations. I think every human being on the planet would concur. We all like to relax, come and go at our own leisure, and generally exercise control over our lives. Everyone values those things. Indeed, we value them too much. If that's evidence of a Dad Material Deficiency, then all men suffer from the condition. Nobody is Dad Material. Nobody is Mom Material. Nobody is cut out for anything but the pursuit of ephemeral pleasures.

Before we have kids, we all have priorities that need to be adjusted and some that need to be abandoned altogether. No childless man can take his life as it is presently arranged and, keeping it completely intact and undisturbed, place a child in the middle of it. So if you're looking at your life as you're currently living it and saying, "I can't wedge a kid into this," you're right. You can't. I couldn't. But does that mean we shouldn't ever have one? Put another way: is a thing automatically not worth doing if it requires significant change?

A man's childless life is not constructed for fatherhood, there's no doubt about that. It's not a dad framework. It's not Dad Material, as you say. It's not built to support a family. It's built only to support himself. The whole thing would need to be deconstructed and rebuilt, which is a process that begins the moment his first child is born. It can't really begin before that, seeing as it's rather impossible for a man to focus his life around a family he doesn't yet have. 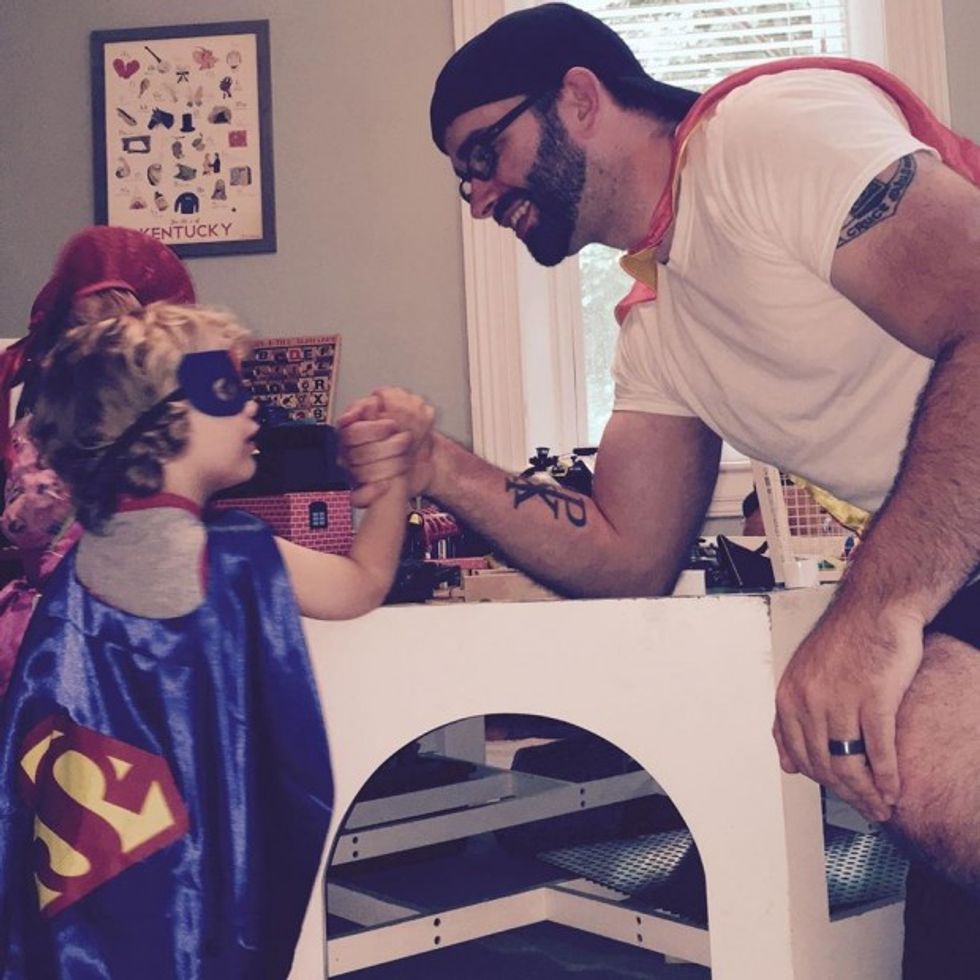 Making things more difficult, men who exist only for themselves often become more frivolous and childish the longer they maintain that lifestyle. Men need to live with intention. We need to exist for something. We need a mission. A purpose. A struggle. A cause. When we don't have that, we tend to fill in the gap with toys and television and other things that render us increasingly weak and dim-witted. Soon we're living every day exactly like a 3rd grade boy on summer break. Then we look at our ridiculous lifestyle and take it as evidence that we aren't cut out to be grown men.

I'm not saying this is the case for you. But it was the case for me, I'll admit. I wasn't a man until I was a husband and a father. I had no real incentive or reason to be one prior to that point. I was just sort of there. Biding my time. Living entirely in the moment. YOLO, as the kids say. Frankly, I wasn't fit to be a husband or father before I became one. I wasn't cut out for it until I was in it. And even now, I confess that I've got a long way to go until I can claim to have mastered the roles.

Maybe you're just like I was, or maybe you're a better sort of person (not a very high bar to get over). Whatever the case, things only go wrong when we think we can have kids without making any significant adjustments or sacrifices. It's like thinking we can leap from unemployed to employed without having to put on pants or give up our mid-day video game binges. Nobody can have a job and still live the life of a jobless person. Nobody can have a child and still live the life of a childless person. You can try, but you're liable to lose both your job and your family in the process.

So, you don't feel like you could fit a kid into your life exactly as it is right now? You're right. You'd have to change it. But that raises the real question: Is it worth it? You like your free time and your vacations, but is there something better out there? Is there something deeper to be found in life if you dig for it?

I truly believe that no man can ever be happy or satisfied until he embraces his role as a father, in whatever capacity. As long as he lives like a boy, as long as he lives only for his toys and his free time, he'll be miserable because there's just not enough in all that stuff to sustain a man. Some men will find their fatherhood role outside of biological or adoptive fatherhood, and they'll be happy there. But most men, like us, will find fatherhood in fatherhood. And if a man is in a legitimate marriage with a woman, and there is nothing medically preventing him from conceiving children, then that's a pretty solid indication that he's supposed to be a dad. Entering into a fertile marriage with no intention of becoming a father is like enrolling in flight school with no intention of becoming a pilot. What's the point? Why are you there? Just to make friends?

That's the problem with men (and women) today, isn't it? So many of us aren't living for anything. We've got so much to give, but we keep it locked away. Everything is a calculation. A business transaction. A give and take. "If I give myself to a child," we ask, "what will I get out of it?" But that's the wrong question, I think. What we should be asking is this: "What am I supposed to be doing? Why am I alive? What's the fundamental purpose of my existence? Am I meant to give myself to nobody and no one and nothing? And if I close myself off in that way, what will I become?" The answer to that last question is "lonely and confused." And that's why there are a lot of lonely and confused people walking around out there.

As far as what you get out of fatherhood, well it just so happens that you are about to gain quite a lot. A sense of purpose. A reason. A cause. An entire universe you never knew existed. An outlet for that self-sacrificing love that all men fundamentally desire to give. Our culture is determined to numb that desire to the point that we don't even recognize it anymore, but it's still there. When we have a family of our own -- when we graduate from boyhood to fatherhood, as all men must do in some form -- then we discover the desire we'd perhaps not recognized before. And there's plenty of joy to be had there, I promise you. I'm not eloquent enough to sufficiently describe it, but I can report that I've found it and it's real. Trust me.

Sure, it's not all sunshine and butterflies. Being a dad is hard work. Really hard work. It still feels impossible to me sometimes. I think about my wife and my three children and I feel the enormous weight of the duty I have to them. I'm not only called to feed them and clothe them and keep a roof over their heads, but to protect their souls. I'm called to lift them on my shoulders, as Christ lifted His cross, and guide them to the arms of their Father in Heaven. How can I do that? How am I equipped? I'm... me, for God's sake. I'm not a saint or a hero. I struggle enough to get myself to the finish line, much less these other four souls.

But those are my fears crying out. Those are doubts. And doubts are understandable, but they aren't an authority. Remember when God told Moses to go and bring His people to the Promised Land, Moses did not believe himself capable, either. "Who am I that I should go?" He asked. And God answered, "I will be with you."

So that is God's response to me and to you. When you say, "Who am I to take on this responsibility?" God answers, "I will be with you." In other words, you're not taking it on by yourself. You're not cut out to do this alone. That's why you'll have Him there the whole time, and you'll have the confidence of knowing that you're doing what you're meant to do with your life. What you're called to do. What God intends for you, and for so many other men, even if they run from the challenge out of fear and selfishness.

You're fulling the purpose for which you were made. And you should be happy about that.

I guess, as it turns out, you are dad material.

To request Matt for speaking engagement, contact Matt at Outreach Speakers. Email: events@outreach.com Phone: 866-400-2036. For all other comments and hate mail, email Contact@TheMattWalshBlog.com.