No, Hollywood. Islam Does Not have a PR Problem.

The problem is millions of jihadists, aiders, abettors and sympathizers, not ignorant Americans.

Ever since the savage attacks in France, our pencil-waving, cartoon-pixelating media and Islamic theologian body politic have gone on an Islamic charm offensive.

In the face of 24,935 jihadist attacks since Sept. 11, 2001, we are told over and over again that Islam, one of the world’s great religions, is peaceful and merely being distorted by misunderstanding violent extremists with no particular ideology.

Whether or not you believe this, in spite of Islam’s supremacist goals and history, Koran-endorsed strategic lying and deception by way of taqiyya, the totalitarian theopolitical doctrine of Shariah that compels the systematic persecution of women, gays and non-Muslims, the sermons of influential imams let alone the definition of Islam itself, "submission," is besides the point and distracts us from the real issue at hand.

The real issue is that there are millions of Muslim jihadists, aiders, abettors and sympathizers in the world – including all throughout the West – working through means, overt and covert, violent and peaceful, to unite the world under the rule of Allah.

Not America’s support for Israel (pre-Obama at least).

The fact that the largest casualties of jihadist savagery are Muslims, renders moot almost all of these points.

And the fact that only a small percentage of Muslims may be jihadists should give comfort to absolutely no one. If even 0.1 percent of the 1.6 billion Muslims in the world are jihadists, aiders, abettors or sympathizers, then 1.6 million people seek to destroy Western civilization.

As borne out by the latest Pew poll on Muslim views on suicide bombings from July 2014, 0.1 percent would in fact be a shockingly low figure: 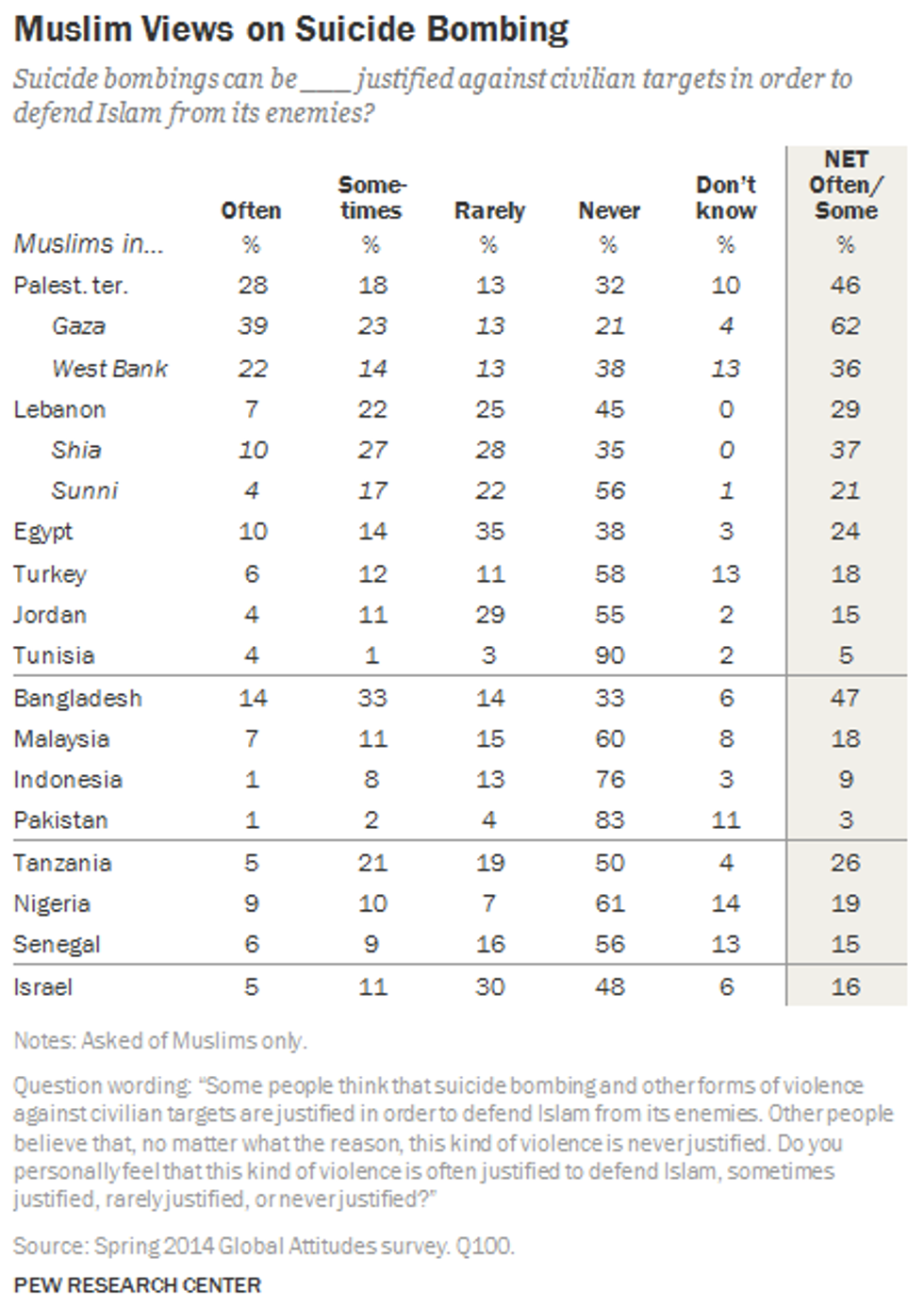 One other data point that the folks in Hollywood or Washington, D.C. would prefer not be printed: As of 2013, after New York City, Dearborn, Michigan -- with a population of under 100,000, and the largest percentage of Arab-Americans in the country -- had the highest number of individuals classified as “known or suspected terrorists” by our government.

So it was with great consternation that I read an article in Variety that reflects so well why we are losing a war that only Islamic supremacists are fighting.

Given the volume of terrorists who have committed hideous acts of violence in the name of Allah over the years, there will be those who will be convinced there is something intrinsically problematic about Islam if it is linked to so much hatred and bloodshed.

But that’s a leap in logic steeped in ignorance. And that ignorance is rooted partly in an unfamiliarity with Muslims.

Could Hollywood help remedy that? In the wake of a tragedy borne from a dastardly desire to silence freedom of speech, there’s a crying need for an artistic expression of a very different kind than Charlie Hebdo’s brand of satire.

What is needed now is more depictions of average Muslims in popular culture. Not the kind ripped from the headlines that paints them as violent zealots but the kind that shows them to be the normal friends, neighbors, business associates, etc., that millions of them are all over this nation.

According to Hollywood, the proper response to jihadist slaughter is to show Americans that not all Muslims are jihadists.

Islam just has a PR problem.

It is reminiscent of an Obama administration that blames demonstrably disastrous policies on the ignorance of those simple Americans, fooled by poor "optics," or, when it’s taking responsibility, the administration’s failure to explain its policies well enough.

Would there even be a question of whether the evil radicals who took the lives of innocents were any kind of reflection on Muslims in general if more people, particularly non-Muslims in the U.S., had any sense of what average Muslims are actually like?

Lacking any normative alternative, it’s almost understandable that people lapse into lazy, dangerous stereotypes. Too many associate Islam with the actions of a radical fringe because of the absence of cultural signposts that modern Muslims exist, breathe, love and eat just like the rest of us.

Those bitter clingers are just not sophisticated enough to understand that Islam is peace.

Leave aside for a second the fact that folks in tolerant, progressive, diverse and clearly hypocritical Hollywood show profound ignorance of Islam as practiced throughout wide swaths of the world, where the very groups Hollywood purports to care about most are discriminated against and routinely slaughtered.

Leave aside for a second the fact that the America outside of the New York-Los Angeles-Washington, D.C. axis actually contains a far higher number of folks who have interacted with average Muslims in the flesh, while serving in our armed forces.

While Islamic supremacists are at war with us as part of a global jihad, why is Hollywood’s first obligation to make sure that all Muslims don’t get a bad name – to fight a PR battle that only exists because Muslims are killing people?

Shouldn’t Hollywood’s job actually be to expose us to the truth that there are those in the world who pose an existential threat to our way of life, including the free expression on which Hollywood relies and cherishes?

What is wrong with America is not that as progressives would have us believe, ignorant bigots in flyover country are Islamophobes engaging in a hypothetical Teahadist crusade.

What is wrong with America is that people have been burying their heads in the sand for years, ignoring, whitewashing, and showing extreme cowardice – dhimmitude -- in the face of Islamic supremacists carrying out a slow motion, mass ethnic cleansing against non-Muslims for decades.

While the comparison becomes tired, it must be asked of Hollywood: During World War II, would our response to Nazi aggression have been to script movies portraying Germans as moderate, peaceful people?

Regardless of what helps America’s elites sleep at night, in the real world, evil exists. And evil does not care for Western projection, whether it comes to the mullahs in Iran or the comrades of the Kremlin.

Culture really does matter, and Hollywood, which has already done a great deal of damage to the fabric of America in its promotion of moral relativism, victomology and other values antithetical to our Judeo-Christian heritage, will only make things that much worse by undertaking the efforts described in this Variety article.

What Hollywood should be doing is educating Americans on the actual nature of her enemies, not idealizing, coddling or humanizing them.

Where Hollywood should be placing its emphasis and empathy is on the victims of said enemies, not the victimizers, and the heroes like Chris Kyle who protect us from them.

The problem is not that the American people are ignorant of Islam, but that our media and government continue to distract us from the real threat, and are themselves Islamophobic – unable or unwilling to critically examine Islamic doctrine, facts and history.

It has and will continue to get Americans killed the longer we ignore it.