Obama: Iran Could Get a Nuclear Weapon After 13 Years

President Barack Obama walks to the Rose Garden of the White House in Washington, Thursday, April 2, 2015, to speak about the breakthrough in the Iranian nuclear talks. The president heralded a framework nuclear understanding with Iran as an "historic" agreement that could pave the way for a final deal that would leave the U.S., its allies and the world safer. (AP Photo/Susan Walsh)
Associated Press

WASHINGTON (AP) -- Defending an emerging nuclear deal, President Barack Obama said Iran would be kept a year away from obtaining a nuclear weapon for more than a decade, but conceded Tuesday that the buffer period could shrink to almost nothing after 13 or more years.

Obama, whose top priority at the moment is to sell the framework deal to critics, was pushing back on the charge that the deal fails to eliminate the risk because it allows Iran to keep enriching uranium. He told NPR News that Iran will be capped for a decade at 300 kilograms - not enough to convert to a stockpile of weapons-grade material. 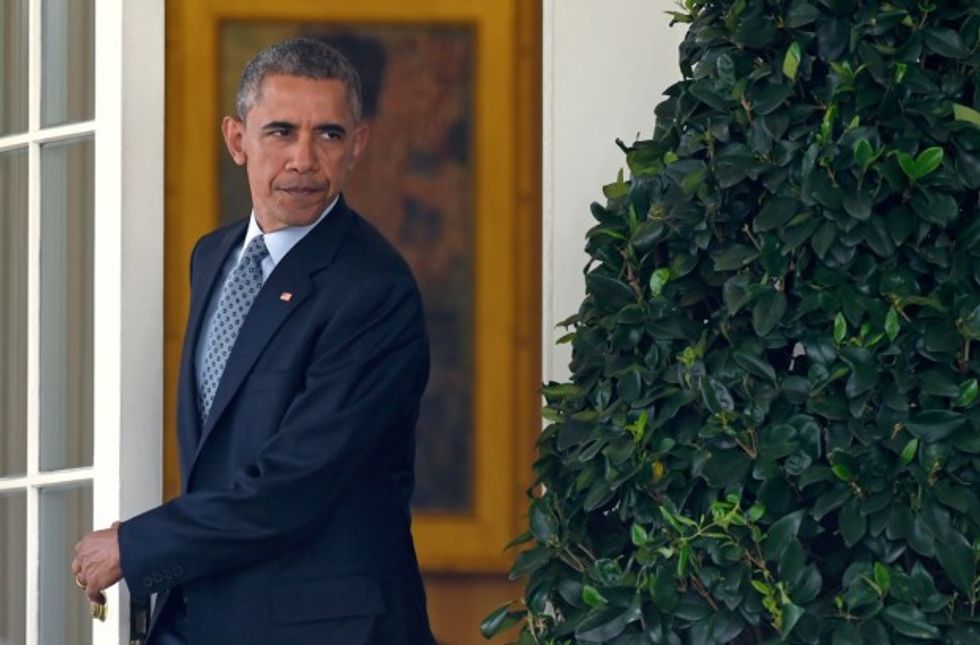 President Barack Obama walks to the Rose Garden of the White House in Washington, Thursday, April 2, 2015, to speak about the breakthrough in the Iranian nuclear talks. The president heralded a framework nuclear understanding with Iran as an "historic" agreement that could pave the way for a final deal that would leave the U.S., its allies and the world safer. (AP Photo/Susan Walsh)

"What is a more relevant fear would be that in Year 13, 14, 15, they have advanced centrifuges that enrich uranium fairly rapidly, and at that point, the breakout times would have shrunk almost down to zero," Obama said.

Breakout time refers to how long it would take to build a bomb if Iran decided to pursue one full-bore - in other words, how long the rest of the world would have to stop it. The framework deal expands Iran's breakout time - currently two to three months - to at least a year. But that constraint would stay in place only for 10 years, at which point some restrictions would start phasing out.

Although Obama acknowledged that Iran's breakout time could shrink, he said at least the world would have better insight into Iran's capabilities because of extensive inspections in the earlier years.

"The option of a future president to take action if in fact they try to obtain a nuclear weapon is undiminished," Obama said.

The stark admission came as the president seeks to quiet a growing chorus questioning whether the deal he and world leaders have negotiated merely delays the certainty of a nuclear-armed Iran. Obama has insisted confidently that Iran will not get a nuclear weapon on his watch, which ends in roughly 20 months, but has made no similar assurances about his successors.

Tehran has always maintained it doesn't want a nuclear bomb, but the international community has been skeptical, and America's close ally Israel considers a nuclear Iran an existential threat. U.S. lawmakers and foreign policy hawks have questioned how Obama can strike a diplomatic deal with a country that continues to threaten Israel and tops the U.S. list of state sponsors of terror.

Obama, who is also working to restore ties to longtime U.S. foe Cuba, has suggested cautiously in the past that a nuclear agreement could be a precursor to Iran pursuing a more amicable relationship with the world community. But in the days since the framework deal was announced in Switzerland, his administration has sought to emphasize that the deal relies on inspections, not trust, and is worthwhile even if the Iranian regime remains venomously anti-American.

"I think there are hard-liners inside of Iran that think it is the right thing to do to oppose us, to seek to destroy Israel, to cause havoc in places like Syria or Yemen or Lebanon," Obama said. "If they don't change at all, we're still better off having the deal."