"This is a president who has a deep understanding of Israel…"

White House deputy national security adviser Ben Rhodes took to Israeli television news shows Monday to try to persuade jittery Israelis that the framework agreement over Iran’s nuclear program is the “best deal” that could have emerged from negotiations and that President Barack Obama’s commitment to the Jewish state has been unmatched by previous presidents.

“This is a president who has a deep understanding of Israel and its history and the Jewish people’s commitment to Israel,” Rhodes said. “His security commitment to Israel has been greater than any president’s to date in terms of his ability to secure the assistance and have the cooperation that Israel needs.” 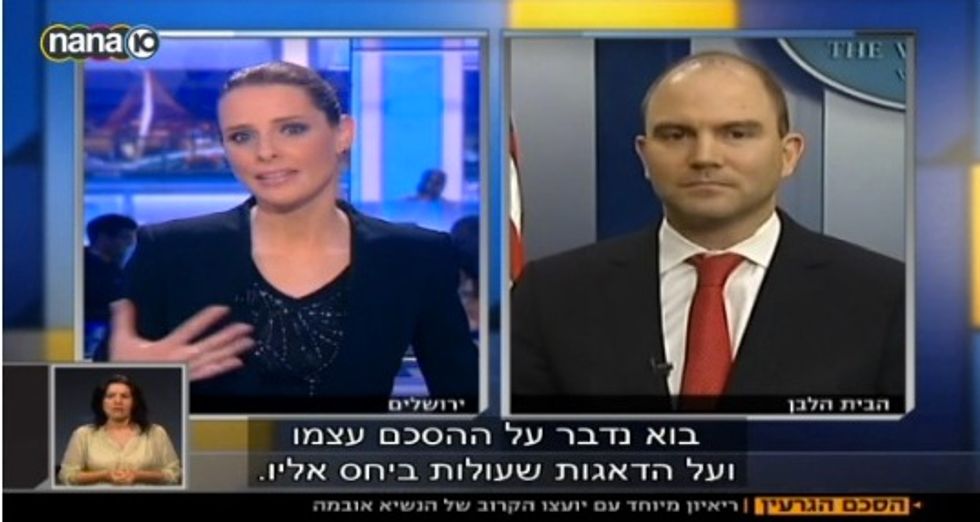 While he touted Obama’s commitment to Israel in an interview with to Channel 10, Rhodes skirted directly answering a question from Channel 2 as to whether Israeli Prime Minister Benjamin Netanyahu could expect an invitation to visit the White House anytime soon.

Netanyahu is currently involved in negotiations with lawmakers over forming his next government, a process that could still take weeks.

Rhodes said that under the framework agreement announced last week, “Iran will never be permitted to build a nuclear weapon.”

However, in an interview with NPR broadcast Tuesday, Obama acknowledged that after 13 years under the deal, it's possible Iran could have advanced centrifuges to quickly enrich uranium, significantly cutting the time it would take to develop a weapon.

Israeli Prime Minister Benjamin Netanyahu has said that the deal will not block Iran from building a nuclear weapon's capability.

“By removing the sanctions and lifting the main restrictions on Iran’s nuclear program in about a decade, this framework paves Iran’s path to a bomb,” Strategic Affairs Minister Yuval Steinitz said in a document released Monday raising key questions about the agreement.

Rhodes conceded to the Israeli news show that Obama and Netanyahu have a “substantive policy difference as it relates to Iran.”