Here's where Clinton and Sanders strayed...

WASHINGTON (AP) -- Hillary Clinton cast the financial industry as an adversary in her presidential campaign - despite the money that industry has poured into her White House effort. Bernie Sanders once again mischaracterized the share of the wealth taken by the very richest Americans. 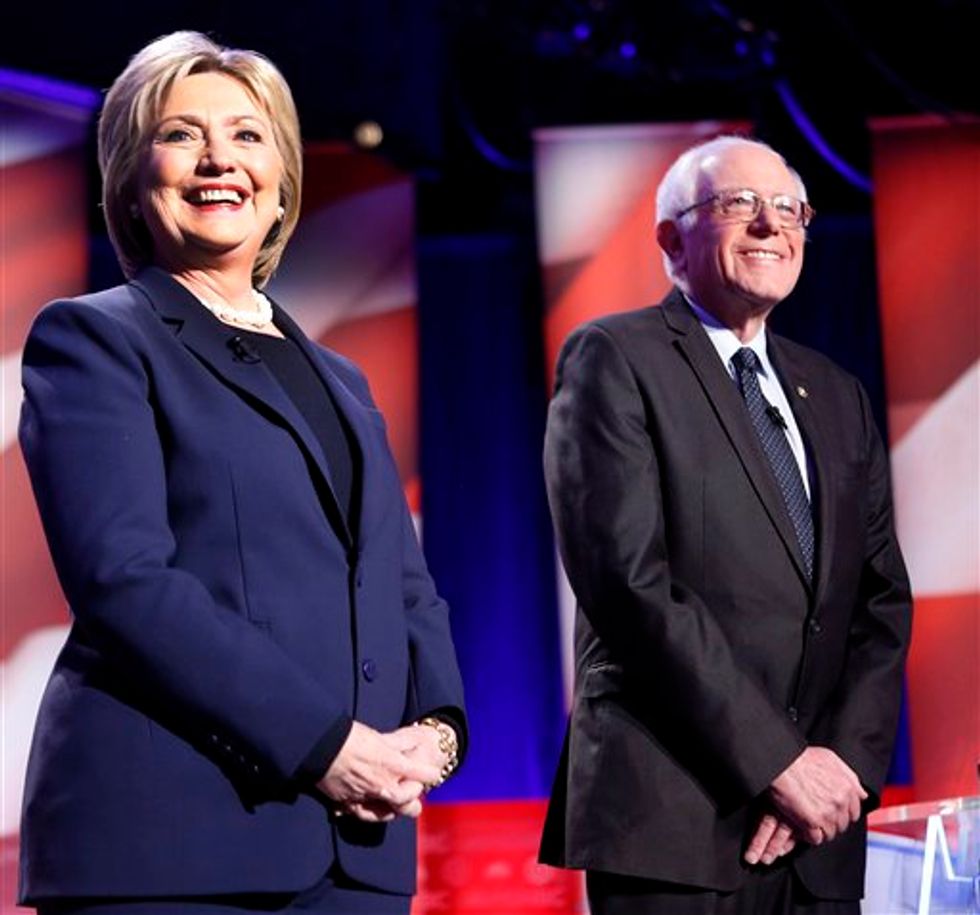 A look at some of the claims in their latest Democratic presidential debate:

"They are trying to beat me in this primary."

Wall Street is not the anti-Clinton monolith she implied. People in the securities and investment industry gave more than $17 million last year to super political action committees supporting her presidential run and nearly $3 million directly to her campaign, according to OpenSecrets.org, a campaign-finance watchdog. Wall Street is the top industry donating to her effort, ahead of the legal profession, non-profit institutions and others.

Clinton is taking heat from Sanders over her Wall Street ties, which go back decades.

The Washington Post reported Thursday that Clinton has brought in more money from the financial sector during her four federal campaigns - for Senate and president - than her husband, Bill Clinton, did in his quarter-century political career. In all, more than $44 million was raised for her campaigns. This includes more than $1 out of every $10 of the money contributed for her 2016 campaign.

Clinton has often talked about how much she has raised from teachers, as opposed to big corporate interests. But the $2.93 million given directly to her campaign last year by people in the securities and investment industry surpassed the $2.88 million given by people in education, OpenSecrets found.

"Almost all new income and wealth is going to the top 1 percent."

This has been a mantra by Sanders, but it relies on outdated numbers. In the first five years of the economic recovery, 2009-2014, the richest 1 percent captured 58 percent of income growth, according to Emmanuel Saez, a University of California economist whose research Sanders uses.

That's a hefty share, but far short of "almost all." In the first three years of the recovery, 2009-2012, the richest 1 percent did capture 91 percent of the growth in income. But part of that gain reflected an accounting maneuver as the wealthiest pulled income forward to 2012 in advance of tax increases that took effect in 2013 on the biggest earners.

Many companies paid out greater bonuses to their highest-paid employees in 2012 before the higher tax rates took effect. Those bonuses then fell back in 2013. And in 2014, the bottom 99 percent finally saw incomes rise 3.3 percent, the biggest gain in 15 years. Average wages also showed signs of picking up last year as the unemployment rate fell, suggesting the bottom 99 percent may have also seen gains in 2015.

Clinton makes a dubious distinction. Although it can be debated whether certain types of military personnel fit the definition of "combat" troops, there is little doubt that special operations forces like those now operating both in Syria and Iraq do.

In the fall, a special operations soldier was killed in a firefight in Iraq during a joint U.S.-Kurdish commando raid on an Islamic State prison.

The Pentagon recently sent up to 200 special operations troops to Iraq to carry out a range of risky missions, including raids against Islamic State targets.

Pilots of fighter aircraft, bombers and other warplanes that have flown over Iraq and Syria, dropping bombs and missiles on Islamic State targets on a daily basis, certainly are engaged in combat.

Clinton said she supports Obama's reluctance to take the lead in ground combat in Iraq and Syria. But many military members are now engaged in combat.

"You have 3 out of the 4 largest banks in America today, bigger than they were, significantly bigger than when we bailed them out because they were too big to fail."

Sanders is right that JPMorgan, Bank of America and Wells Fargo are larger than they were in mid-2008, before they received bailout money. But those gains largely reflect mergers and acquisitions that occurred, frequently at the government's behest, during the financial crisis. JPMorgan bulked up by purchasing Bear Stearns, in a deal facilitated by the Federal Reserve. Bank of America ballooned when it acquired Merrill Lynch and Wells Fargo roughly doubled in size when it bought a floundering Wachovia Bank.

But the Dodd-Frank financial regulatory overhaul bill, passed in 2010, has forced banks to hold more capital as a cushion against risk and to make future bailouts less likely. That requirement and others has caused several banks, including JPMorgan, Goldman Sachs and Citi, to shed assets to avoid growing larger and triggering further oversight.

"I said that I was holding out that hope that it would be the kind of trade agreement that I was looking for. I waited until it had actually been negotiated because I did want to give the benefit of the doubt to the administration. Once I saw what the outcome was, I opposed it."

As Obama's secretary of state, Clinton was far more enthusiastic about the Pacific trade deal taking shape than she became once she was running for president and trying to appeal to the liberal wing of her party. As secretary she had given speeches around the world in support of the deal under negotiation, saying in Australia in 2012 that it "sets the gold standard in trade agreements," a cheerleading sentiment she echoed elsewhere.

She's stated since that the final agreement didn't address her concerns. But the final version actually had been modified to drop certain provisions that liberal activist groups had opposed.

Clinton was taking aim at Sanders' universal health care coverage plan that he calls "Medicare for all," and a new independent analysis suggests that she was correct about his understating the cost.

The nonpartisan Committee for a Responsible Federal Budget found that the tax increases in Sanders' plan would only cover about 75 percent of the estimated spending under the plan, creating at least a $3 trillion hole over 10 years.

The analysis was based on Sanders' estimate of how much his plan would spend. If that turns out to be low, then the financing gap would grow.

The group represents deficit foes from both political parties. Leon Panetta, a CIA director and a defense secretary under President Barack Obama, is a co-chairman of its board.