In the aftermath of protesters shutting down conservative speaker Charles Murray's appearance at Vermont's Middlebury College last month — which culminated in violence against liberal professor Allison Stanger who dialogued with Murray “to demonstrate publicly my commitment to a free and fair exchange of views" — the chair of the school's political science department apologized to the campus for co-sponsoring the event "without wider consultation."

Bert Johnson wrote in the student newspaper Thursday that his "closed decision-making process" involving only him "contributed to a feeling of voicelessness that many already experience on this campus, and it contributed to the very real pain that many people – particularly people of color – have felt as a result of this event."

Murray, author of “The Bell Curve,” is widely disliked by liberals over his views on race, class, intelligence and genetics.

Johnson's apology added that he looks "forward to hearing from the college-wide committee on invited speakers that is currently taking shape, as well as from my departmental colleagues and our department’s student advisory committee."

TheBlaze on Monday caught up with Johnson and inquired if his apology signaled that certain speakers might be rejected in the future and if he's concerned that, in turn, would stifle free speech.

"I would hope that hearing more opinions would not mean that more speakers would be rejected," Johnson told TheBlaze. "I am against establishing criteria for invited speakers. I would be open to measures that would allow for or help other groups to bring additional speakers, hold discussion sessions."

Indeed, Johnson noted in a lengthy Twitter thread that he believes "free speech/expression is a paramount value in the academy. Second only to safety and security."

Johnson also told TheBlaze he signed a statement — along with many other Middlebury professors — declaring that "protest that prevents campus speakers from communicating with their audience is a coercive act."

"Silencing a speaker is unacceptable," he told TheBlaze.

Because of the protests in the event venue, Stanger and Murray left and livestreamed their Q&A from a private location — a contingency plan agreed upon ahead of time in case things got out of control. 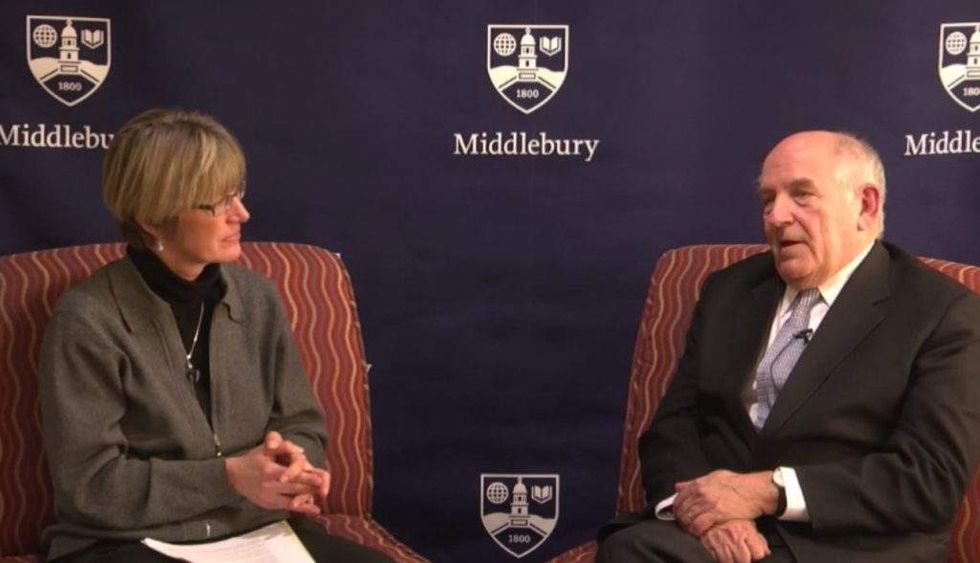 As for the injury to Stanger — who sustained a concussion amid a mob attack after the Q&A with Murray — Johnson told TheBlaze the violence was "appalling and unacceptable."

Stanger wrote about the speech shutdown — and the physical attack — on Facebook.

“We confronted an angry mob as we tried to exit the building," she wrote. "Most of the hatred was focused on Dr. Murray, but when I took his right arm both to shield him from attack and to make sure we stayed together so I could reach the car too, that’s when the hatred turned on me.”

Stanger said a “thug grabbed me by the hair and another shoved me in a different direction. I noticed signs with expletives and my name on them. … For those of you who marched in Washington the day after the inauguration, imagine being in a crowd like that, only being surrounded by hatred rather than love. I feared for my life.”

Johnson noted on his Twitter thread that more advance notice isn't a requirement for "controversial" speakers, only that "a more open process is polite. It shows respect for others who may be affected and want to contribute & respond."

He noted that "conservative students, too, have felt isolated – indicating the importance of bringing conservative viewpoints to campus."

Here's a clip of the protest before the violence took place. (Content warning: Rough language):