News
Chris Pandolfo
June 30, 2021
JIM WATSON,SAUL LOEB/AFP via Getty Images
Like Blaze News? Get the news that matters most delivered directly to your inbox.

A new in-depth study of the 2020 presidential election shows how former President Donald Trump expanded his support with Hispanic voters, millennials, and women and yet still lost to President Joe Biden, who severely cut into Trump's support from suburban voters.

The Pew Research Center's report published Wednesday surveys verified voters, those who reported voting in the 2020 general election and have a record for voting in a commercial voter file. The analysis examines both new voters and those who voted in one or both of the 2016 and 2018 elections. It paints a picture of the demographic composition of the electorate and how different groups shifted their support for the two major parties in ways that may reshape political campaign strategies for decades to come.

Voter turnout in 2020 rose 7% over turnout in 2016. A total of 66% of U.S. adult citizens voted in 2020, and both Trump and Biden brought new voters into the political process. But each candidate began with a base of support from the 2016 election that was largely unchanged. Among those who voted for Hillary Clinton and Trump in 2016, about 9-in-10 also voted in 2020 and stayed loyal to the same party.

As for those who didn't vote in 2016 or 2018 but showed up in 2020, representing 19% of the electorate, Biden and Trump split their support nearly evenly (49% for Biden vs. 47% for Trump), demonstrating how each candidate was able to bring new voters to the polls in 2020. But there was a significant divide in how people of different age groups voted. Biden trounced Trump among voters under 30 who voted in 2020 but not before, winning this group 59% to Trump's 33%. But Trump won new voters over age 30 by 55% to Biden's 42%. 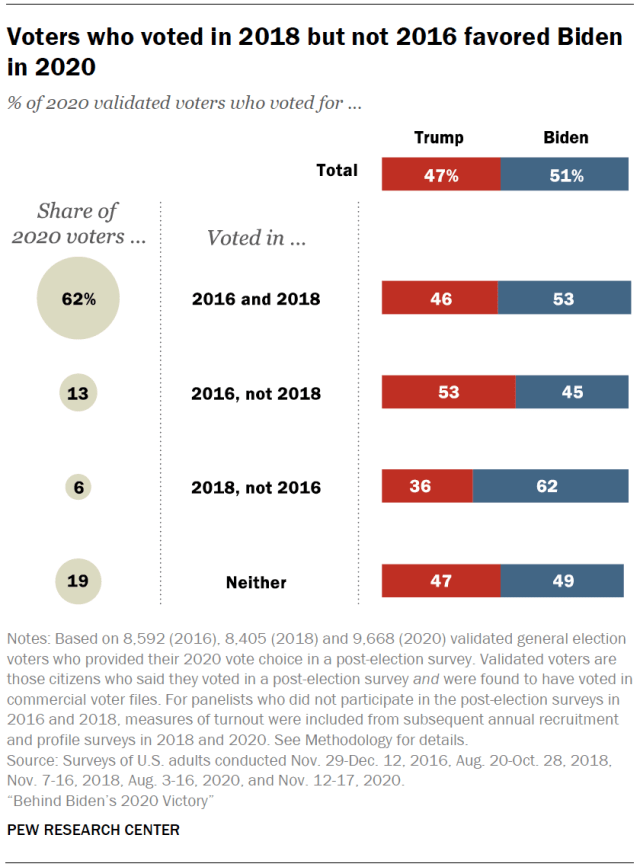 The breakdown shows an advantage for Democrats among younger new voters that will pay dividends in the future if they are able to keep their support for the long term.

Biden's most significant gains were among suburban voters and independents, the groups that were likely responsible for his victory.

Independent voters went for Biden in 2020, 52% to Trump's 43%. This represents a substantial gain for Democrats over 2016, when Clinton and Trump very nearly split the independent vote evenly, 42%-43%. 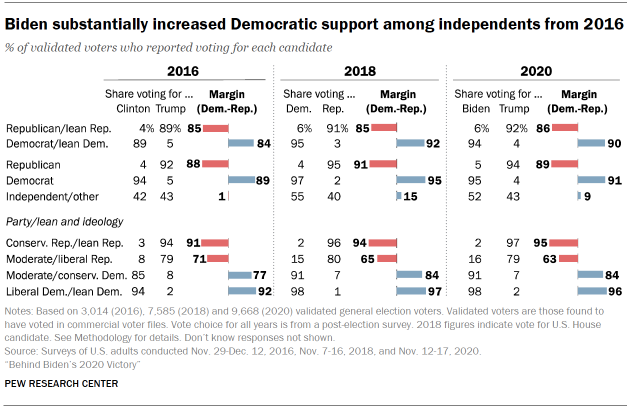 Though he lost the election, Trump made important gains with groups Republicans have been trying to reach for years. 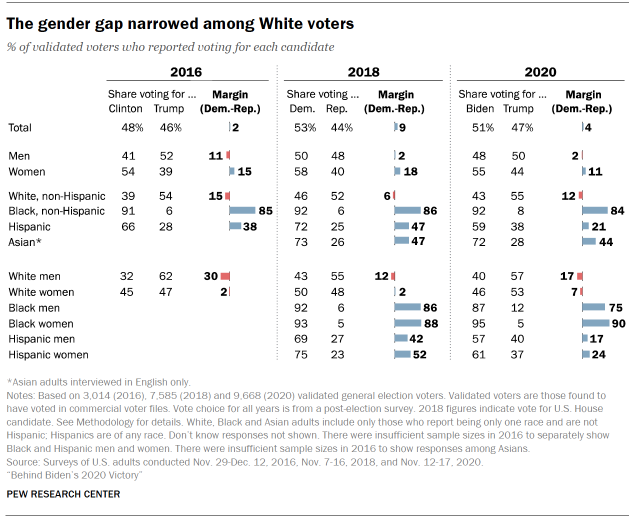 Trump also improved upon his 2016 performance with urban voters by 9 percentage points, millennials by 8 points, whites without a college degree by 4 points, and rural voters by 6 points. 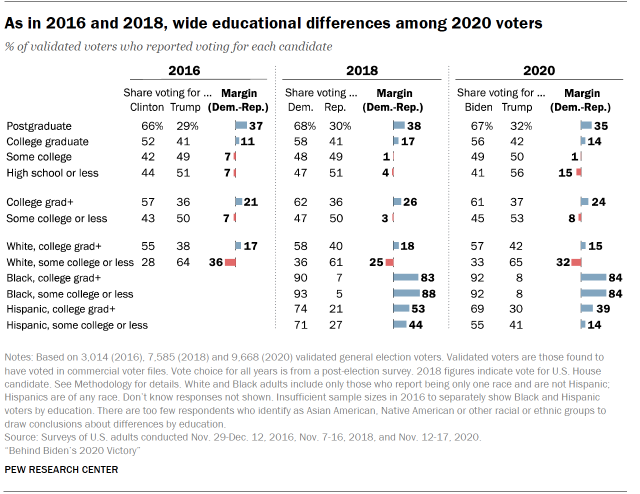 Black voters remained overwhelmingly loyal to the Democratic Party by a margin of 92%-8%. Biden's coalition of black, Hispanic, Asian, and other minority group supporters made up 4 out of every 10 of his voters.

Biden improved over Clinton among white voters without a four-year college degree winning 33% of that group's support in 2020 compared to 28% for Clinton in 2016.

Important generational shifts were a factor in this election. For the first time in decades, Baby Boomers and members of the Silent Generation made up less than half of the electorate in 2020 (44%). Generation Z and Millennial voters were strong Biden supporters by a margin of about 20 points. Gen Xers and Boomers were more evenly split along partisan lines. 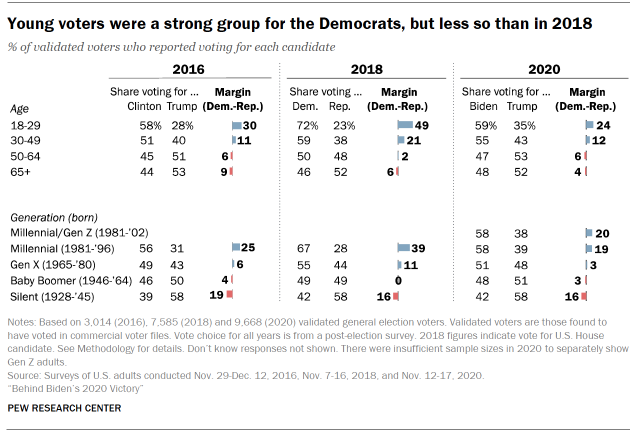 The last key piece of data, and possibly a reason voter turnout was so high, is a record number of voters reported voting by mail in the 2020 election, many doing so for the first time. Almost half of the 2020 electorate, 46% of 2020 voters said they cast their ballots by mail or voted absentee. 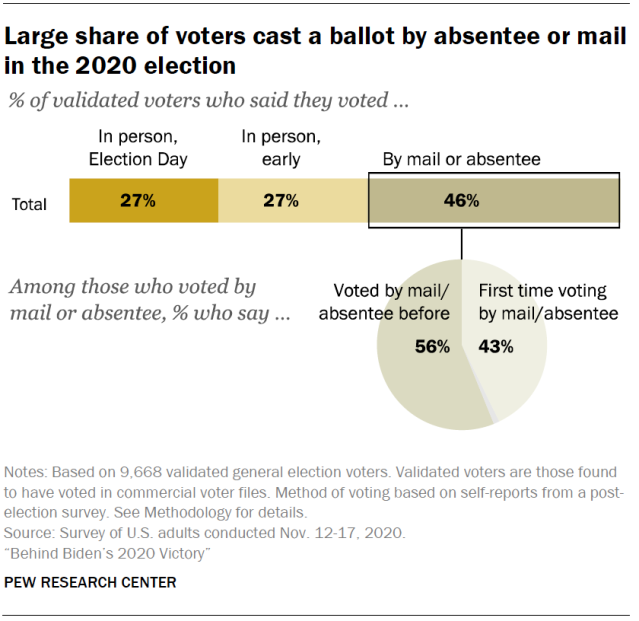 A 58% majority of Biden voters reported voting absentee or by mail-in ballot in the 2020 election. Only roughly a third of Trump voters (32%) said they voted by mail. Nearly two-thirds of Trump voters (68%) said they voted in person either on or before Election Day. These differences match the election results, where Trump won voters who cast their ballots in person on Election Day 65% to Biden's 33% while Biden won absentee and mail-in voters 65% to Trump's 33%.

When the results were reported, many states counted the in-person vote first, showing Trump leading most of the night until the mail-in ballots were counted and Biden caught Trump's lead or overtook the former president in several battleground states.

In the end, Joe Biden defeated Donald Trump 306-232 in the Electoral College and by a 4-point margin in the national popular vote. Had Trump been able to maintain his support among suburban voters and independents, with the gains he made among Hispanics, women, and urban voters, he would have likely been re-elected.

As Democrats fall flat in their push to target the Senate filibuster, DC mayor says 'we wouldn't even be in this situation if Washington DC had two senators'