Chris Enloe
April 27, 2020
iStock/Getty Images Plus/Aquir
Like Blaze News? Get the news that matters most delivered directly to your inbox.

The Democratic Party often claims to be the party of tolerance, but a new study shows the majority of Democrats are far from tolerant when selecting dating partners.

The Pew Research Center discovered in a recent study that nearly three-quarters of Democratic voters — a whopping 71% — said they would not consider dating someone who supports and voted for President Donald Trump.

Of those, 45% said they would "definitely NOT" date a Trump supporter.

Meanwhile, less than half of Republican voters, just 45%, said they would not date a Democrat who voted for Hillary Clinton, and only 19% said they would "definitely NOT" date Clinton supporters.

When it comes to simply dating members of the opposing party, Republicans continued to show overwhelming tolerance.

The survey found that 43% of Democrats will not date a Republican, while just 24% of Republicans said they would not date a Democrat. 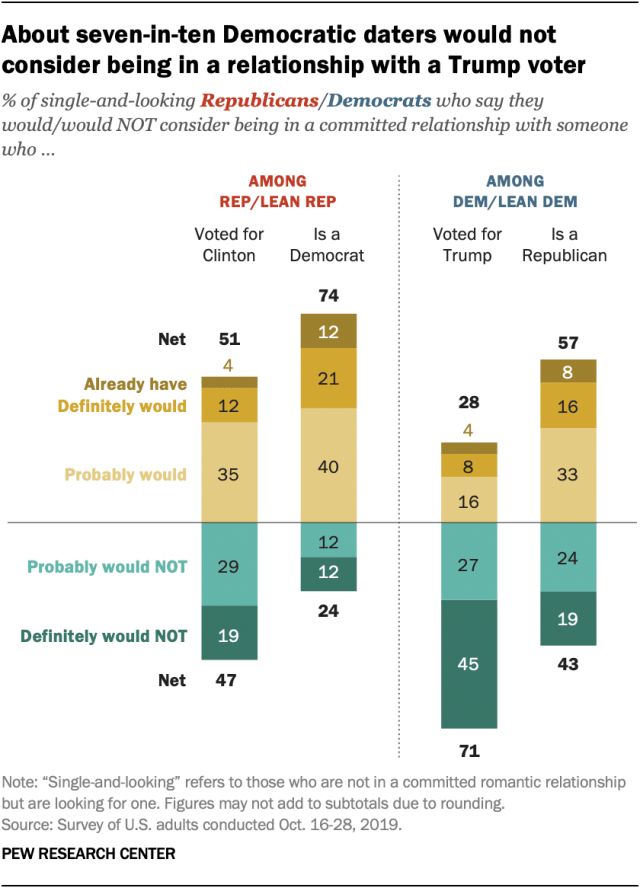 The aversion to dating people of different political orientations reflects the partisan antipathy seen in the overall public.

Other recent Pew Research Center surveys have found that sizable shares of partisans are likely to associate negative traits such as "closed-minded" and "immoral" with members of the opposite political party, and many find it stressful and frustrating to talk about politics with people who don't share their political views.

As Newsweek reported, political surveys over the last several years have revealed just how polarized American politics have become.

Pro-LGBT group to host conference for kids at a church in Florida, drag show included

Glenn recommended: How smart parents help their children to love learning and work

'My God': Dem senator leaves Interior secretary stumbling after confronting her with agency's own statement​

Pro-choice extremist left SPEECHLESS when faced with one glaring truth

A man followed two young girls home from their school bus stops and broke into one of their homes, Oklahoma police said

Deputy sentenced to 18 years after detainees get trapped in floodwaters, drown in the back of his police van