Hillary Clinton and The Democrats' 'War on Children

Hillary Clinton and the Democrats are carrying out a brutal war on children. This should be the GOP's 2016 presidential nominee's campaign theme.

US Secretary of State Hillary Clinton testifies before the Senate Foreign Relations Committee on the September 11, 2012 attack on the US mission in Benghazi, Libya, during a hearing on Capitol Hill in Washington, DC, on January 23, 2013. Secy. Clinton warned of the challenges posed by rising militancy after the Arab Spring as she appeared before US lawmakers Wednesday to be grilled about a deadly attack. "Benghazi didn't happen in a vacuum," Clinton said at the start of a Senate hearing into the September 11 assault on a US mission in eastern Libya. AFP PHOTO / Saul LOEB (Photo credit should read SAUL LOEB/AFP/Getty Images)
Wayne Allyn Root

Happy New Year to TheBlaze readers. It's ironic and telling that this commentary comes on the eve of 2016. Because 2016 is our last stand. It's the most important year in our country's history.

After what President Obama has done to damage America, I fear the window is closing fast. I don't believe America can be saved if a Democrat like Hillary Clinton or Bernie Sanders follows Obama in the White House. Either we take back the White House; repeal and replace Obamacare; stop the madness of climate change/green energy; stop the EPA dead in its tracks; undo all the onerous regulations put into place by Obama; build a wall and secure the border; stop the madness of importing Syrian refugees to America; and dramatically lower taxes, spending and debt; or America is lost forever.

If the GOP doesn't win the White House on November 8th, 2016, the very next day, we need to all be thinking of where to go and what to do to protect our families, our incomes, our assets, our children's future. It's time for "Escape from America." 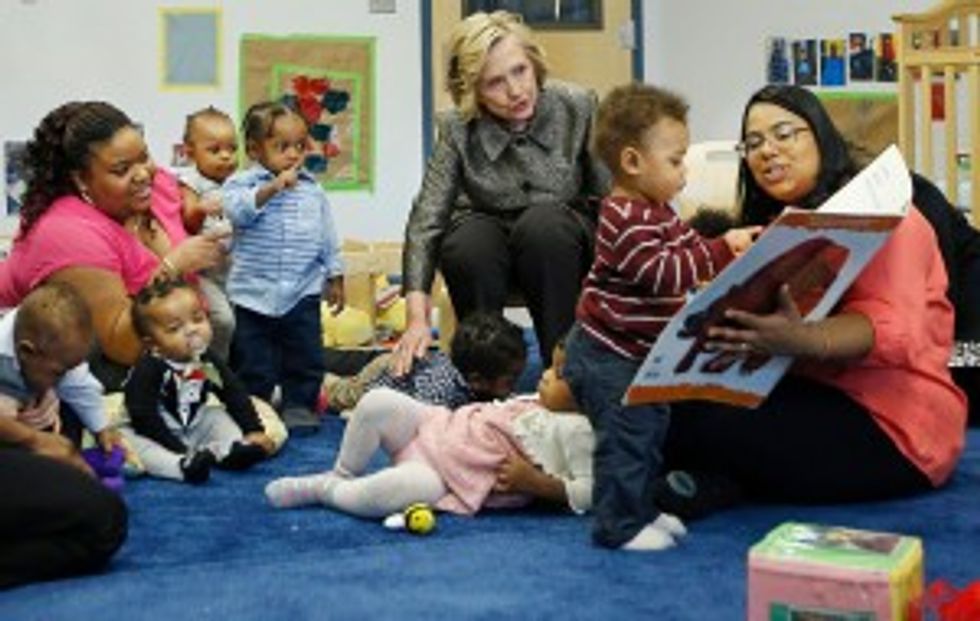 It sounds like the title of a fictional horror film, except this time it's real. Every friend I have with substantial assets to protect is already making plans to either leave, or obtain dual citizenship. The preparations have begun - for smart people with the resources.

This commentary is about the campaign theme that the GOP presidential candidate must use to win the 2016 election. This is the theme that can save our country and our children's future. If Republicans don't use it 24/7 from now until the election in November, they should be prosecuted for gross negligence. Their only defense would be insanity. I call this theme "THE DEMOCRATS' WAR ON CHILDREN."

Democrats understand marketing and branding so much better than Republicans. Obama, Clinton and Sanders always take a page right out of their favorite playbook, Saul Alinsky’s “Rules for Radicals," by declaring a “Republican war on women.”

It’s all Clinton talks about. It will most certainly be the main theme her entire presidential campaign is built around.

Sadly, Republicans are cowards, and afraid of their own shadow. Democrats trot out “the race card” and the “you hate women card” again and again. The GOP responds by playing defense and running scared.

It's the reason I'm a big fan of Donald Trump. He doesn't play that game. He isn't afraid of anyone. He doesn't apologize or play on defense. He plays on offense. He's in your face. He tells the truth and let's the chips fall where they may- no matter how offensive, or politically incorrect. He plays to win.

It’s time for all Republicans to learn from Trump. It's time to fight fire with fire. It’s time to throw out all the gentlemen’s rules. Because we’re not fighting gentlemen. We’re fighting liars and frauds out to destroy America and steal our children’s future. We can’t afford to “play nice.” It's time to put Democrats on the defensive.

Democrats understand the marketing and branding power of using emotional hooks like “the war on women.” Well, two can play at that game. It’s time to use an emotional hook of our own. The difference is this one isn’t made up. It’s time to point out that the real war is the Democrat’s “WAR ON CHILDREN.”

The “WAR ON CHILDREN” starts in the womb. Clinton and her ilk don’t hesitate to support the killing of children in the womb. There is no point in a woman’s pregnancy where abortion is too extreme for Democrats like Clinton.

No limit to abortion is acceptable. Not even ripping a child to pieces with partial birth abortion is too extreme for Clinton and Democrats.

Not even the harvesting and sale of organs from innocent fetuses by Planned Parenthood is too extreme. 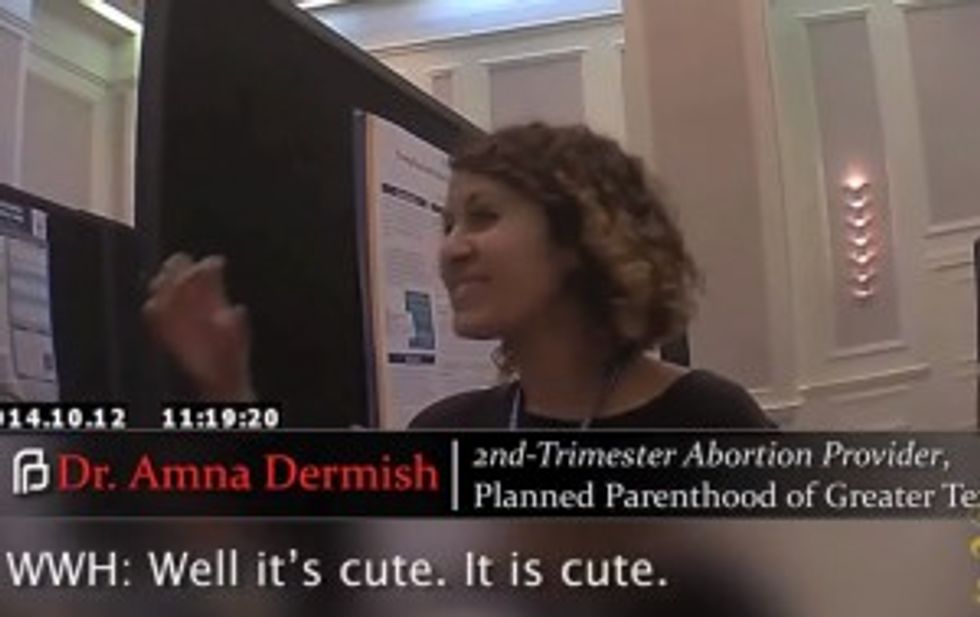 And anyone who tries to point out these extreme examples of murder or torture upon children, anyone who champions or defends children who cannot speak for themselves, is immediately slandered and labeled as “extreme” or “an enemy of women.”

But this is only the start of Clinton and the Democrats' “WAR ON CHILDREN.” The children who survive are then consigned to government schools where they are kept marginally ignorant, taught to always obey authority and show loyalty to government, and taught it’s okay to be dependent upon government. The brainwashing begins young - starting with free breakfasts and lunch provided by government.

Parents no longer take care of the most basic of responsibilities - feeding their children. Can you imagine? Moms and dads are no longer capable of making breakfast for their children. How extreme is it getting? In Baltimore every child in every school now gets a free meal. Government schools teach kids to expect free breakfast, lunch and now even a backpack filled with free food to take home for the weekend, or the entire summer while school is out.

Children are encouraged to look to government to survive. Government is their provider and hero. Mom and dad are helpless, hopeless and clueless.

These same government schools have outlawed being a boy, labeling the actual signs of masculinity as “Attention Deficit Hyperactivity Disorder” and improperly drugging boys because they act like boys. High energy, acting out, squirming, impatience, talking loudly and excitedly, and “always on the go” are all now considered signs of ADHD. I guess I’m the poster boy for ADHD at the age of 54!

Not to mention the more boys they count as "disabled," the more money the school gets from the federal government and the more money parents get from the government. One little problem - your kid is given dangerous drugs they don’t need and are labeled as “disabled” for the rest of their lives.

These same government schools teach our children to be sheep. They are discouraged from thinking for themselves, taught that competition in all forms (but especially in business and the workplace) is bad, and children are rewarded with a trophy if they simply show up.

What does this lead to? A future taking orders at a fast food restaurant, or a future sitting home watching cartoons and Jerry Springer while waiting for a welfare check in the mail. But of course, this is how you create future loyal government-dependent Democrat voters.

Perhaps worst of all is that for many years now our schools have been keeping America’s school children ignorant about basic economics. Our children are never taught in school (and the mainstream media keeps it well hidden too) the signficance of the number $154,000.

This government spending and debt machine is at the heart of the Democrat’s “WAR ON CHILDREN” and the day of reckoning is fast approaching.

If you have any doubt about a day of reckoning and what it might look like, all you need do is look at the disaster of Greece. That bankrupt, broken country proves that debt is a poison, a dream killer, the death of a nation.

A European Union flag billows in the wind as the ruins of the 5th century BC Parthenon temple is seen in the background on the Acropolis in Athens, on Monday, Nov. 26, 2012. The ministers of the 17 countries that use the euro are meeting in Brussels later Monday to try to reach an agreement on disbursement of Greece's next rescue loan installment, after several delays. Athens faces bankruptcy without the cash. (AP Photo/Petros Giannakouris)

But we can look closer to home to see even more proof. Just study Detroit, a city under 100 percent Democrat control for well over 50 years. The last Republican Mayor of Detroit left office in 1962. At the time he left Detroit had the highest per capita income of any city in America.

A vacant, boarded up house is seen in the once thriving Brush Park neighborhood with the downtown Detroit skyline behind it in Detroit, Michigan on March 3, 2013. Image source: REUTERS/ Rebecca Cook

Ruled for half a century by the same policies and leftist agenda of Obama, Clinton and Sanders, Detroit is a bankrupt, broken cesspool of murder, violence, crushing poverty, broken street lights, abandoned buildings, and taxes so high everyone with any assets has left. Both Greece and Detroit are places that prove the Democrats' “WAR ON CHILDREN” is brutal and real.

So, setting aside late term abortion or the harvesting of body parts for profit...

You mean a place where children can’t walk the streets without risking shootings, rape or murder, is not a “WAR ON CHILDREN”?

You mean a place where children are almost guaranteed to never get a solid education, never find a good job, and taught to rely on food stamps and welfare for life isn’t a “WAR ON CHILDREN”?

You mean a place where almost no child has a father in the home isn’t a “WAR ON CHILDREN”?

You mean a public school system that mislabels little boys as "disabled" and gives them dangerous drugs so the schools and parents can qualify for money from the federal government, isn't a "WAR ON CHILDREN"?

You mean a place where your environment is abandoned buildings, broken street lamps and where drug dealers roam the streets isn’t a “WAR ON CHILDREN”?

You mean a place where a child is more likely to wind up in prison than college isn’t a “WAR ON CHILDREN”?

Again, let me stress, only Democrats and their policies and progressive agenda have created this brutal environment. Only Democrats like Obama, Clinton and Sanders have been in power and control of Detroit since 1962. And don’t forget the parties that ran Greece into the ground range from socialists, to Democratic Socialists, to communists to “The Coalition of the Radical Left.”

It’s always liberals, leftists, progressives and socialists who lead a “WAR AGAINST CHILDREN.”

So, let’s stop talking about a made-up “war on women.” It is only meant to distract. The GOP must start talking about the REAL war facing our nation every day: Hillary Clinton and the Democrats' “WAR ON CHILDREN.”