During a rousing speech in Pittsburgh on Labor Day, Joe Biden said:

Why in God's name should a man or woman working in a steel mill making $50,000 a year pay a higher [tax] rate than someone who makes tens of millions of dollars on Wall Street? … The tax code is not fair. It's simply not fair. The wealthy aren't paying their fair share.

That statement is demonstrably false, and like similar claims, it is based upon incomplete measures of taxes. To determine overall tax rates, one must account for all taxes and all income. Yet, politicians, journalists, commentators, and "fact checkers" routinely flout this basic tenet of honest accounting.

With regard to federal taxes, the Congressional Budget Office comes closer to the ideal of measuring all taxes and income than any other primary source of data on this subject. CBO accounts for nearly all income (such as wages, interest, capital gains, government benefits, and employer benefits) and 92 percent of all federal taxes (such as personal income, corporate income, payroll, capital gains, and excise). CBO does not account for the remaining 8 percent of taxes because it cannot reliably allocate them by income group.

CBO's latest estimates of federal tax burdens are for 2013, and these show that households in the top 1 percent of income (averaging $1,453,000) paid an average effective tax rate of 33 percent. This figure reflects the actual taxes they paid; it is not a marginal tax rate that fails to account for exemptions or deductions. It is a real-world tax rate. 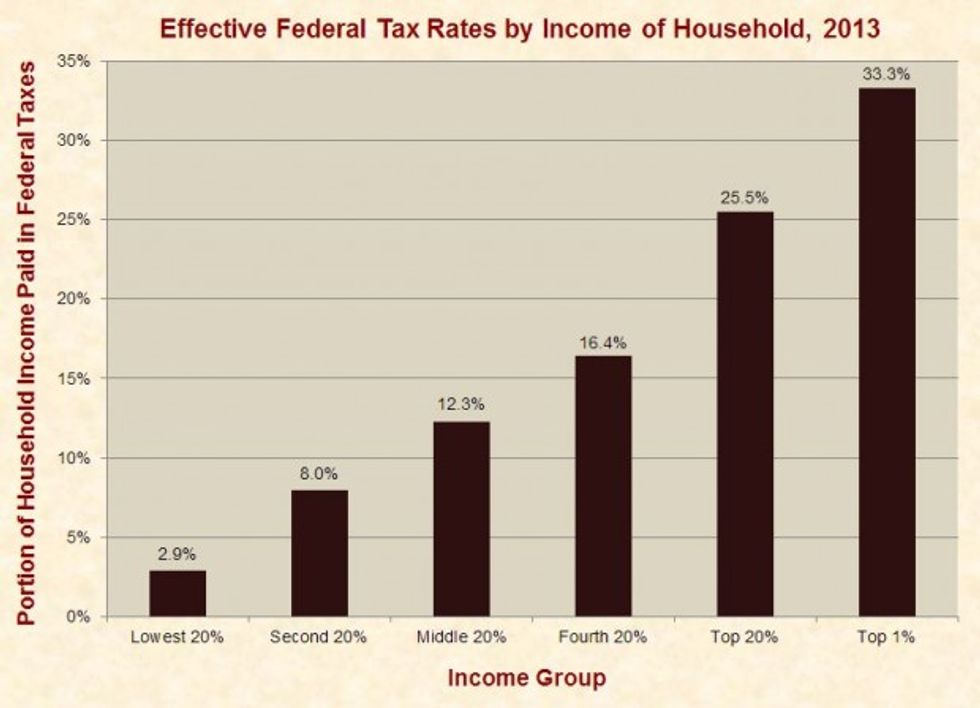 What About Capital Gains?

Many claim that capital gains—a major source of income for wealthy investors—are taxed at much lower rates than ordinary wages. However, when all taxes are considered, the tax rates on wages and capital gains are in the same ballpark.

Although the highest federal capital gains tax rate on most capital gains is 20 percent, and the highest individual income tax rate is 39.6 percent, capital gains are often taxed twice, once at the corporate level and again at the personal level. As detailed in the "Encyclopedia of Taxation and Tax Policy" (and confirmed by the IRS, the Congressional Research Service, and the U.S. Joint Committee on Taxation):

The capital gains tax on corporate stock can be viewed as an aspect of the double taxation of corporate income….

After accounting for corporate income and other taxes, an investor who makes a million dollars in capital gains during 2015 will pay an effective federal tax rate of about 35 percent, while a worker who earns a million dollars in wages will pay about 42 percent. These rates are based on simplifying assumptions and no personal itemized deductions, so they are not meant as absolute figures but relative ones.

Incidentally, the tax rate on capital gains would have been 41 percent—or within one percentage point of the tax rate on wages—were it not for extraordinary stock market gains relative to inflation over the past several years. These lucrative returns have been fueled in part by the Federal Reserve's policies of low interest rates and quantitative easing.

In sum, corporations ultimately don't pay taxes; they collect taxes from individuals and remit them to the government. This is why CBO and other authorities on tax distribution account for the burdens of corporate income taxes, corporate payroll taxes, and excise taxes when determining individual tax burdens. Once this is done, the tax rates on capital gains are roughly the same as the rates on wages.

How About State and Local Taxes?

With regard to state and local taxes, CBO explains that their distribution by income is enigmatic and debatable:

Given the fact that (1) federal tax rates climb sharply with income (2) state and local tax rates are too close to call in terms of their burden on differing income groups, (3) federal taxes are about twice as high as state and local taxes—Biden's claim that middle-income earners pay a higher tax rate than high-income earners is not remotely plausible.

So how can the vice president of the United States utter such a blatant falsehood without the press holding him accountable? Because the press has been spreading the same fiction. A small sample of those who have done this includes the Washington Post, the Daily Beast, Newsmax, the Providence Journal, the New York Times, FactCheck.org, PolitiFact, CBS, and Agence France-Presse.

As a result of such disinformation, the public has become grossly deceived about this issue. For three consecutive years, a scientific, nationwide poll commissioned by Just Facts has found that about 80 percent of voters believe middle-income earners pay a higher average federal tax rate than the upper 1 percent. This includes 93 percent of Democratic voters, 71 percent of Republican voters, and 71 percent of third-party voters.

While a misinformed electorate may serve certain political agendas, it comes at a steep cost. In the words of John F. Kennedy, "only an educated and informed people will be a free people," and "the ignorance of one voter in a democracy impairs the security of all."

James D. Agresti is the president of Just Facts, a nonprofit institute dedicated to researching and publishing verifiable facts about public policy.