Hypocritical Left Has Own Version of 'Apocalyptic' Rhetoric

Journalists and media pundits roundly mocked the "apocalyptic" tone of the RNC convention, while conveniently forgetting how often the left hails the end of times in its own dark and stormy rhetoric.

on the first day of the Democratic National Convention at the Wells Fargo Center, July 25, 2016 in Philadelphia, Pennsylvania. An estimated 50,000 people are expected in Philadelphia, including hundreds of protesters and members of the media. The four-day Democratic National Convention kicked off July 25. (Photo by Alex Wong/Getty Images)
Rep. Dave Brat

Journalists and media pundits roundly mocked the "apocalyptic" tone of the Republican National Convention, while conveniently forgetting how often the left hails the end of times in its own dark and stormy rhetoric.

Secretary of State John Kerry recently stated that air conditioners and refrigerators pose as big a threat to "life on the planet" as terrorists. And lest this appear like an accidental over-statement, the Obama administration has repeated the claim that environmental dangers are a catastrophe far greater threat to the planet than terrorism dozens of times.

The left engages in this sort of hyperbolic rhetoric with such frequency that pundits and voters alike are numb to it. 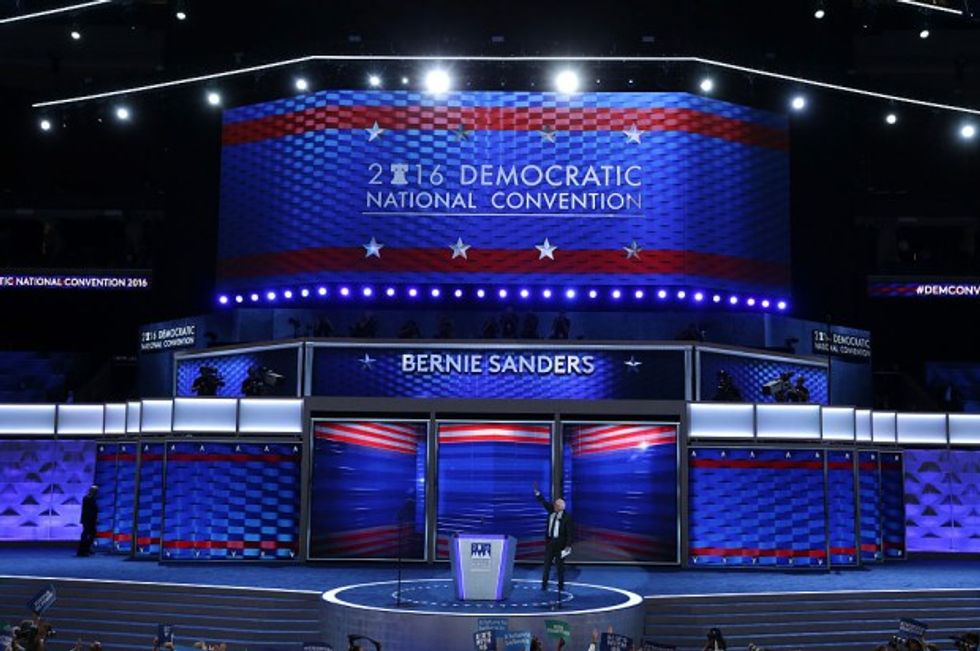 Tea party conservatives were called "anarchists" and "fanatics" by then-Senate Majority Leader Harry Reid in 2013. Perhaps encouraged by the relative silence of the media, then-Chair of the Democratic Party Wasserman-Schultz followed up by accusing "tea party extremists" like Gov. Scott Walker (R-Wisc.) of giving women "the back of his hand" and "grabbing" women "by the hair and pulling us back." Predictably, no hullabaloo followed her extreme rhetoric.

Often the left directs their hyperbole to their opposition on the right. If Republicans don't pass Obama's $900 billion stimulus package, America will lose 500 million jobs, then-Speaker of the House, Rep. Nancy Pelosi (D-Calif.) said -- twice. On another occasion, Pelosi said that a Republican told her his party doesn't care about "really hungry children." Rep. Alan Grayson (D-Fla.) said the Republican health care plan was to "Die quickly!” But don't worry, you won't see these statements called "apocalyptic" by the media.

More recently, on bathroom policies, then-DNC Chairwoman Debbie Wasserman Schultz said Republicans were "determined to stay stuck in the Stone Age on LGBT equality." It's stunning there were toilets at all in the Stone Age, let alone ones segregated by gender! Don't forget, this is the party that likes to call Republicans "anti-science."

The only problem? It’s still there; and some scientists report it's actually getting larger.

But facts rarely get in the way of a good leftist dystopian narrative, especially one as near and dear to liberal hearts as the environment. Several scientists predicted around Earth Day 1970 that the world would suffer from a global ice age, famines, mass starvation, and become uninhabitable over the next few decades.

"Civilization will end within 15 or 30 years unless immediate action is taken against problems facing mankind," said Harvard biologist George Wald.

"Population will inevitably and completely outstrip whatever small increases in food supplies we make. The death rate will increase until at least 100-200 million people per year will be starving to death during the next ten years," predicted Stanford University biologist Paul Ehrlich.

The chief organizer of Earth Day 1970, Denis Hayes, predicted it was "already too late to avoid mass starvation."

"'By 1985 air pollution will have reduced the amount of sunlight reaching earth by one half," predicted Life Magazine forty years ago, and Paul Ehrlich added that air pollution would "take hundreds of thousands of lives in the next few years alone." But you rarely see the media pointing out the left's Chicken Little approach, even when the co-founder of Greenpeace Dr. Patrick Moore recently called himself a "climate change skeptic" and charged environmentalists with global warming alarmism.

Liberals frequently accuse Republicans of being racists and supporters of hatred and bigotry; and they never apologize for over-the-top rhetoric that would make an honest actor blush. During the run-up to the 2012 presidential election, Congresswoman Sheila Jackson Lee (D-Texas) said candidate Newt Gingrich was using racist "code words" to attack President Obama. Then Vice President Joe Biden went full bore, comparing Republicans to slave owners who want to "put y'all back in chains." A leading voice in the Congressional Black Caucus Rep. Andre Carson (D-Ind.) said Tea Party lawmakers would be happy to see black people “hanging on a tree.”

Never mind that President Lincoln, a Republican, signed the Emancipation Proclamation and that the right believes in moral codes rooted in the Bible and the Enlightenment, or that some of us (myself included) went to seminary. The left brushes aside our values with snide condescension; we are the "bitter" Americans President Obama referred to who "cling to guns or religion or antipathy to people who aren't like them or anti-immigrant sentiment or anti-trade sentiment as a way to explain their frustrations."

Thomas Jefferson, the author of the Declaration of Independence and fellow Virginian's legacy, is under attack by leftist critics who call him a "rapist" and "racist" slave owner and have demanded that his statue be removed at both the University of Missouri at Columbia and the College of William & Mary (Jefferson's own alma mater.) Regardless of the moral merits of the founders themselves, most Americans believe the Declaration of Independence and the Constitution are revolutionary documents that enshrined human rights. The left, however, frequently denigrates not just the men, but also their work. For just one example, look to Sen. Claire McCaskill (D-Mo.) who called the separation of powers enumerated by the founding fathers "a little maniacal."

The problem for the left is that truth has only a secondary value to advancing a political narrative.

Look at the Iran Nuclear Agreement, the supposed signature achievement of the Obama Presidency, authored by former fiction writer a.ka. White House foreign policy "guru" Ben Rhodes. According to the White House webpage, it’s a historic agreement that will prevent Iran from acquiring nuclear weapons. At least, that's what Rhodes sold it as to the American people, only to repudiate that account in a self-aggrandizing New York Times Magazine piece where he mocked the gullibility of both foreign policy journalists and Americans generally.

And one need only remember Obamacare architect Jonathan Gruber who boasted of the "lack of transparency" in the law as "a huge political advantage" and openly mocked the "stupidity of the American voter" to realize that for the left, this disdain is a feature, not a flaw.

That all this has happened with nary an outcry from the left is reason to give any thoughtful person pause. It is the right scary narrative.

Rep. Dave Brat (R-Va.) is a member of the Budget Committee and the House Freedom Caucus. Before serving in Congress, he worked for the World Bank assisting developing world economies and was an economics professor at Randolph Macon College.