"How does the Greek government think that it will survive and deal with its problems in that period?"

UPDATE 8:15 p.m. ET: (TheBlaze/AP) — Greece's parliament voted in favor of Prime Minister Alexis Tsipras' motion to hold a referendum on the country's creditor proposals for reforms in exchange for loans. Tsipras and his coalition government have urged people to vote against the deal, throwing into question the country's financial future.

The vote is to be held next Sunday, July 5. It has raised the question of whether Greece can remain in Europe's joint currency, the euro. Many Greeks alarmed by the announcement for the referendum early Saturday morning formed queues at ATM machines, putting a further strain on banking deposits.

BRUSSELS (TheBlaze/AP) — Greece's place in the euro currency bloc looked increasingly shaky on Saturday after eurozone nations rejected a month-long extension to its bailout program and the prime minister called for a risky popular vote on the country's financial future.

Worried Greeks queued outside banks for cash amid the uncertainty, while eurozone finance ministers deciding to hold a meeting without Greece to assess how to keep the euro currency union stable in the face of heightened risks that Greece could drop out. 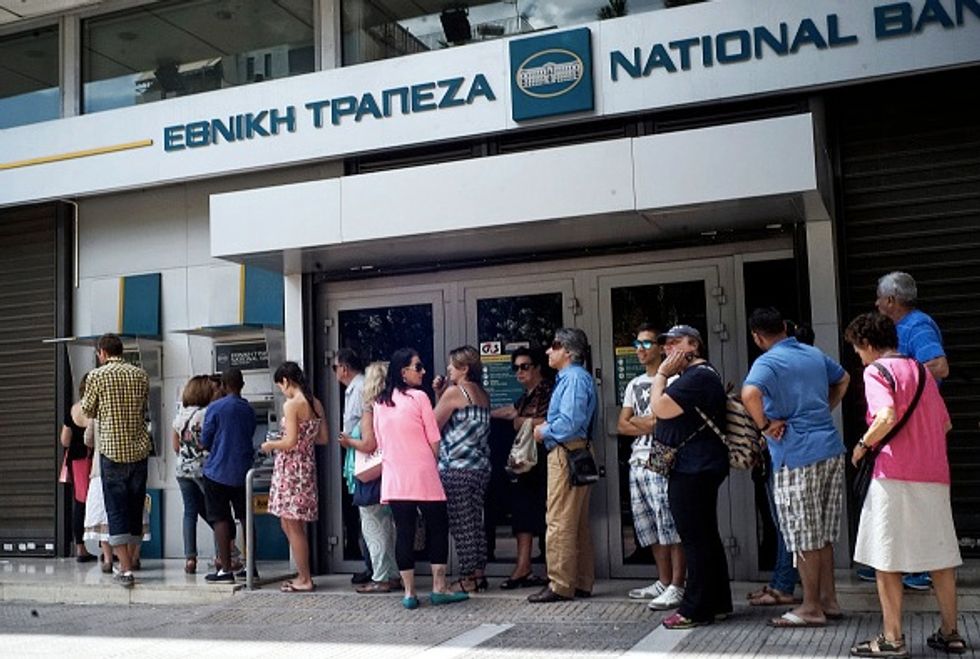 Greeks queue in front of the National Bank to use ATM to withdraw cash as Parliament holds an emergency session for the government's proposed referendum June 27, 2015 in Athens, Greece. (Image source: Milos Bicanski/Getty Images)

Prime Minister Alexis Tsipras shocked Greece's creditors late Friday when he called for a referendum in a week on whether to accept the reforms that the rescue lenders want in return for more financial aid. The country's bailout program ends Tuesday and without an extension or more loans from creditors, Greece is likely to be in arrears on a debt payment due the same day. Its banks face the risk of collapse.

The Greek government's call for the people to vote against a proposed bailout deal from international creditors on July 5 angered many of its eurozone partners.

"We must conclude that, however regretful, that the program will expire on Tuesday night. That is the latest date that we could have reached an agreement," said Jeroen Dijsselbloem, the top eurozone official.

"The Greek authorities have asked for a month extension. But in that month there can be no disbursements," he said. "How does the Greek government think that it will survive and deal with its problems in that period? I do not know," Dijsselbloem said.

France's finance minister, Michel Sapin, stressed that a deal was still possible and that he was ready to act as a go-between among Greece and the creditors after relations neared a breaking point.

Now much will depend on whether the European Central Bank will accept to continue to prop up Greek banks even after the country's bailout program expires. It would be under huge pressure to stop using eurozone taxpayer money to keep alive the banks if there is no prospect for a deal.

The governing council of the ECB will meet "in due course" to assess the situation.

Greek Finance Minister Yanis Varoufakis insisted that Athens and lenders still had time to improve the deal — and avoid a negative outcome to the referendum. "There is no reason why we can't have a deal by Tuesday. If the deal is acceptable we will recommend a positive vote," he said.

"It's a sad day for Europe but we will overcome it," Varourfakis said upon leaving while his counterparts continued talks.

The sides are haggling over the reforms the country needs to make in exchange for more financial aid but have managed to only increase uncertainty over the country's future.

Greece has a debt due on Tuesday and its bailout program expires the same day, after which it is unclear whether its banks would be able to avoid collapse, an event that could be the precursor to Greece leaving the euro.

The Greek Parliament is debating and will vote at midnight Saturday on the government's request for a referendum.

Across Athens, people started flocking to cash machines shortly after Tsipras announced the referendum around 1 a.m. local time. The queues grew the next day, though the number of people and the availability of cash varied widely. The Bank of Greece assured in a statement that the flow of cash will continue. 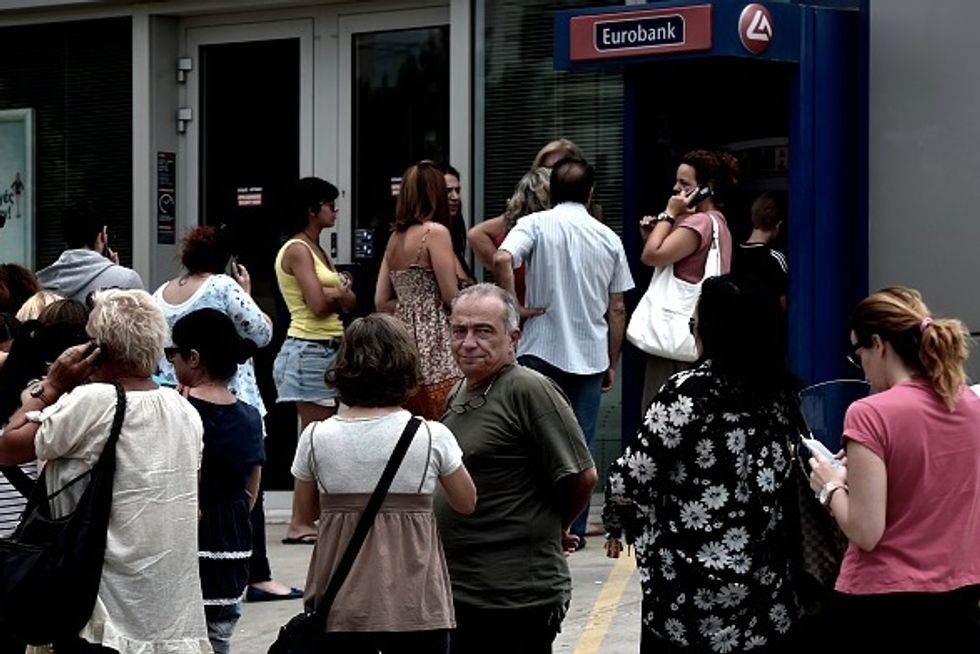 According to Reuters, about 35 percent of the ATM network — some 2,000 out of the 5,500 ATMs across Greece — ran out of euro banknotes at one point during the day and were being replenished, the bankers said.

Replenishing ATMs usually takes one to two hours per ATM, leading to the long lines, one banking source said.

Around 600 million euros was withdrawn from the banking system on Saturday, one senior banker at one of Greece's four big lenders told Reuters. A second banker estimated the outflow at more than 500 million euros.

Though that was below the level of over 1 billion euros seen on some days over the past two weeks, the figure was almost exclusively from ATM withdrawals, where the average daily limit of cash that can be taken out is 600 to 700 euros, bankers said.

"Demand for cash is definitely higher than what you see on a normal Saturday," one of the bankers said.

The referendum will ask Greeks to vote on a proposal of reforms that the country's creditors made on Thursday. The Greek government rejected it as imposing cuts that are too harsh on the general population.

What would happen in that case — whether Greece would have to leave the euro or try to renegotiate more time with creditors — is unclear.

An exit from the euro would put Greece through a new era of economic pain. With the new currency less valuable than the euro, the government would have to write off a chunk of its foreign loans — mainly owed to eurozone countries — and many companies and households would go bankrupt. Experts predict a long and deep recession in a country that has already been through five years economic depression.

The uncertainties of all this would roil European and global markets, though experts are divided on the extent. Some say Europe is better equipped to handle a Greek euro exit, but others say it is unclear what might happen. The euro dropped in value slightly on international markets after the referendum was called.

As the country came to grips with what lay ahead, former prime minister Costas Karamanlis broke a longstanding silence and criticized the government.

"The nation's most vital interests demand that the country remains at the heart of Europe. The EU's actual shortcomings do not, in any way, negate this..." Karamanlis said. "Foolish choices that undermine this principle push the country to adventures, with unpredictable and possibly irreversible consequences."

In the streets of Athens, views were mixed on the merits of holding a referendum.

"The people are not in a position to decide. Those who are in position to decide are the ones that know a bit more and they must explain and simplify the issues for the people," said Grigoris Kanellopoulos, 41, a street seller of bagels.

Athina Kontosozou, 56, has already made up her made about how she will vote.

"No (to the creditors' proposals), no to any more measures. We don't know what will happen (after the referendum). Let's hope that things will be better. And they will get better. We believe it."

Nellas reported from Athens. Thanassis Stavrakis and Paris Ayiomamitis in Athens, Greece, and Raf Casert and Lorne Cook in Brussels contributed to this report.