The Latest on 'Top Secret' Clinton Emails: One Talks Drones, Officials Say the Other Could Point to Improper Handling of Classified Material

WASHINGTON (TheBlaze/AP) -- The two emails on Hillary Rodham Clinton's private server that an auditor deemed "top secret" include a discussion of a news article detailing a U.S. drone operation and a separate conversation that could point back to highly classified material in an improper manner or merely reflect information collected independently, U.S. officials who have reviewed the correspondence told The Associated Press. 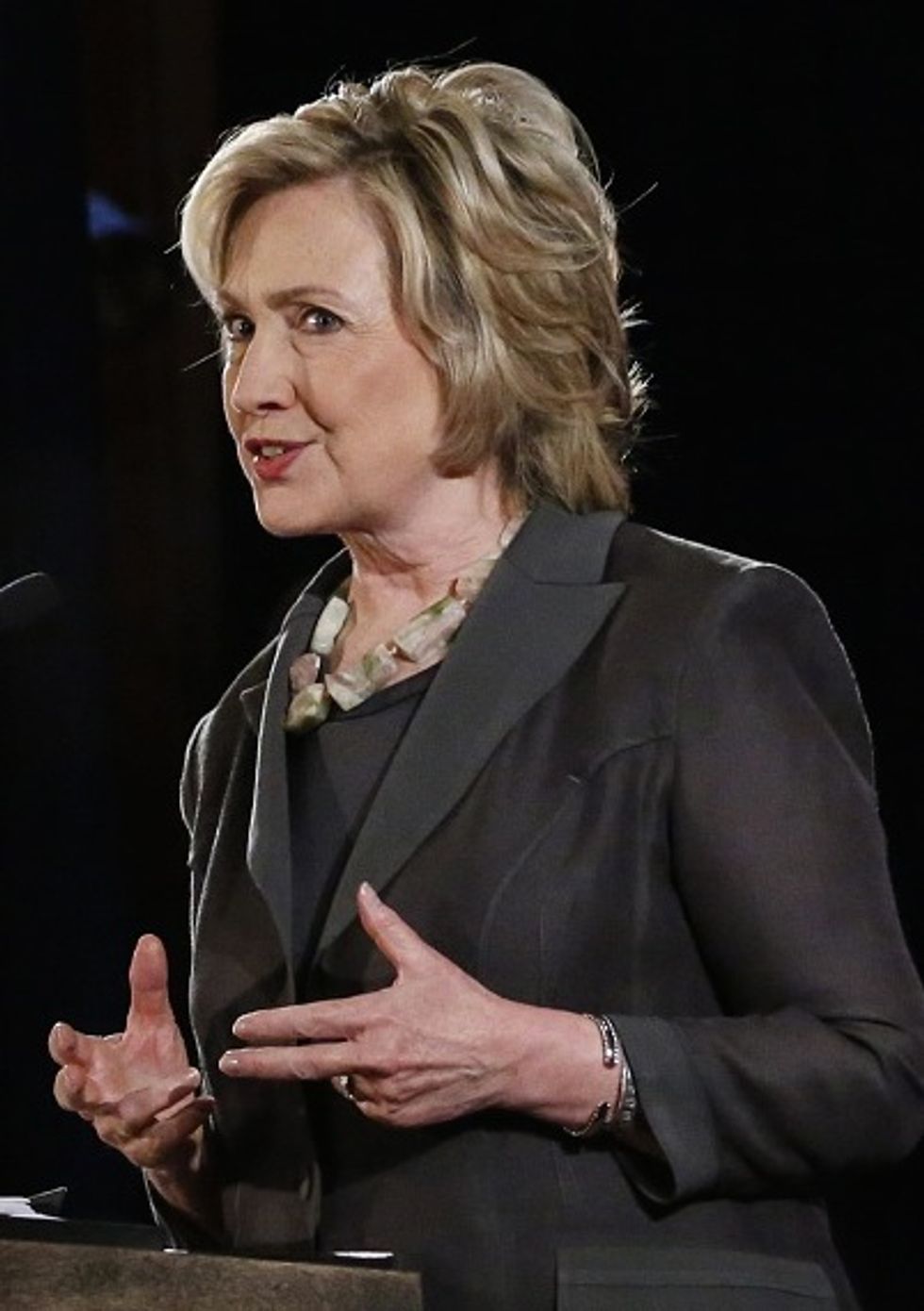 The Justice Department said it had received a request to probe whether Hillary Clinton mishandled sensitive government information by using her private email for State Department business. A few weeks later, Clinton turned over access to her private email server and thumb drives. (KENA BETANCUR/AFP/Getty Images)

The sourcing of the information could have significant political implications as the 2016 presidential campaign heats up. Clinton, the front-runner for the Democratic nomination, agreed this week to turn over to the FBI the private server she used as secretary of state, and Republicans in Congress have seized on the involvement of federal law enforcement as a sign that she was either negligent with the nation's secrets or worse.

On Monday, the inspector general for the 17 spy agencies that make up what is known as the intelligence community told Congress that two of 40 emails in a random sample of the 30,000 emails Clinton gave the State Department for review contained information deemed "Top Secret/Sensitive Compartmented Information," one of the government's highest levels of classification.

The two emails were marked classified after consultations with the CIA, which is where the material originated, officials said.

The officials who spoke to the AP on condition of anonymity work in intelligence and other agencies. They wouldn't detail the contents of the emails because of ongoing questions about classification level. Clinton did not transmit the sensitive information herself, they said, and nothing in the emails she received makes clear reference to communications intercepts, confidential intelligence methods or any other form of sensitive sourcing.

The drone exchange, the officials said, begins with a copy of a news article that discusses the CIA drone program that targets terrorists in Pakistan and elsewhere. While a secret program, it is well-known and often reported on. The copy makes reference to classified information, and a Clinton adviser follows up by dancing around a top secret in a way that could possibly be inferred as confirmation, they said. Several officials, however, described this claim as tenuous.

But a second email reviewed by Charles McCullough, the intelligence community inspector general, appears more suspect. Nothing in the message is "lifted" from classified documents, the officials said, though they differed on where the information in it was sourced. Some said it improperly points back to highly classified material, while others countered that it was a classic case of what the government calls "parallel reporting" - different people knowing the same thing through different means.

The emails came to light Tuesday after Sen. Chuck Grassley, R-Iowa, reported that McCullough found four "highly classified" emails on the unusual homebrew server that Clinton used while she was secretary of State. Two were sent back to the State Department for review, but Grassley said the other two were, in fact, classified at the closely guarded "Top Secret/SCI level."

In a four-page fact sheet that accompanied a letter to Clinton supporters, Clinton spokeswoman Jennifer Palmieri stressed that Clinton was permitted to use her own email account as a government employee and that the same process concerning classification reviews would still be taking place had she used the standard "state.gov" email account used by most department employees. The State Department, meanwhile, stressed that it wasn't clear if the material at issue ought to be considered classified at all.

Still, the developments suggested that the security of Clinton's email setup and how she guarded the nation's secrets will remain relevant campaign topics. Even if the emails highlighted by the intelligence community prove innocuous, she will still face questions about whether she set up the private server with the aim of avoiding scrutiny, whether emails she deleted because she said they were personal were actually work-related, and whether she appropriately shielded such emails from possible foreign spies and hackers.

Clinton says she exchanged about 60,000 emails in her four years as secretary of state. She turned over all but what she said were personal emails late last year. The department has been making those public as they are reviewed and scrubbed of any sensitive data.

One ABC News pointed to was an email mentioning a book Clinton sought to borrow — "Send: Why People Email So Badly and How to Do It Better" byDavid Shipley and Will Schwalbe — which is about better email practices:

But Shipley and Schwalbe warn that deleting emails could lead to future legal troubles.

On page 215, the authors list “Stupid (and Real) Email Phrases That Wound Up in Court.” Number one on the list? “DELETE THIS EMAIL!’ Later, on page 226, the writers warn, “If you’re issued a subpoena, your deletion binge will only make you look guilty.”

Watch ABC's report about this email:

The State Department advised employees not to use personal email accounts for work, but it wasn't prohibited. But Clinton's senior advisers at the State Department would have been briefed upon basic protocol for handling classified information and retaining government records. In Clinton's time, most officials saved their emails onto a separate file or printed them out when leaving office. Only recently has the department begun automatically archiving the records of dozens of senior officials, including Secretary of State John Kerry.

In the emails, Clinton's advisers appear cognizant of secrecy protections.

In a series of August 2009 emails, Clinton aide Huma Abedin told Clinton that the U.S. point-man for Afghanistan, Richard Holbrooke, and another official wanted "to do a secure" conversation to discuss Afghan elections. Clinton said she could talk after she received a fax of a classified Holbrooke memo, also on a secure line. Later, Abedin wrote: "He can talk now. We can send secure fax now. And then connect call."

But other times, the line was blurred. Among Clinton's exchanges now censored as classified by the State Department was a brief exchange in October 2009 with Jeffrey Feltman, then the top U.S. diplomat for the Middle East. Both Clinton and Feltman's emails about an "Egyptian proposal" for a reconciliation ceremony with Hamas are marked B-1.4, classified for national security reasons, and completely blacked out from the email release.

A longer email the same day from Clinton to former Sen. George Mitchell, then Mideast peace envoy, is also censored. Mitchell responds tersely and carefully that "the Egyptian document has been received and is being translated. We'll review it tonight and tomorrow morning, will consult with the Pals (Palestinians) through our Consul General, and then I'll talk with Gen. S again. We'll keep you advised."

This story has been updated to include more information.