Belgian Army soldiers patrols in the center of Brussels on Monday, Nov. 23, 2015. The Belgian capital Brussels has entered its third day of lockdown, with schools and underground transport shut and more than 1,000 security personnel deployed across the country. (AP Photo/Virginia Mayo)
Associated Press

BRUSSELS (AP) -- Brussels will remain on the highest alert level and maintain security measures that have severely disrupted normal life in the city until at least Monday as it faces an "imminent" threat of attack, Belgium's prime minister said Monday, urging his population to remain calm. 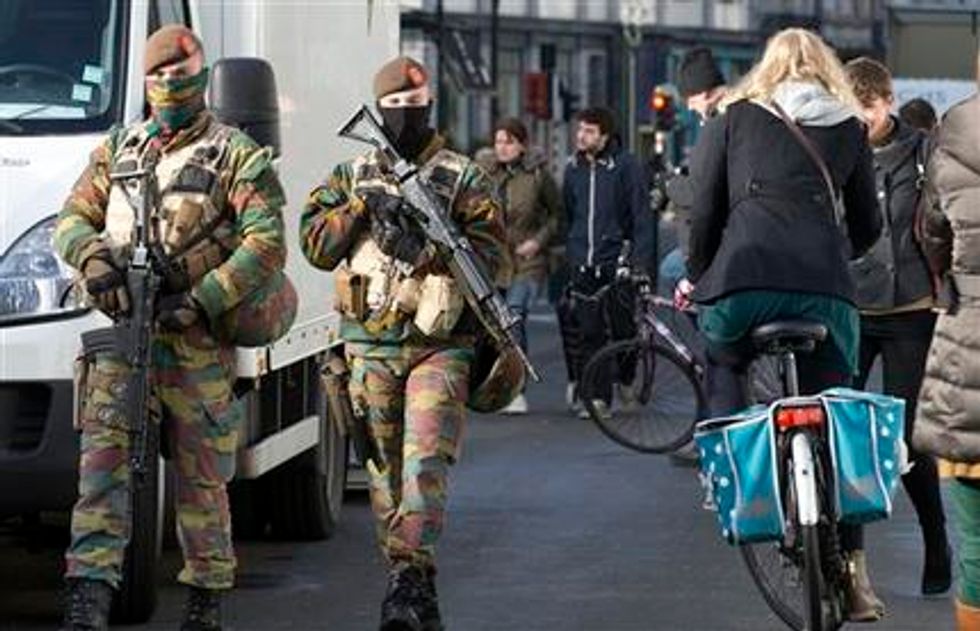 Belgian Army soldiers patrols in the center of Brussels on Monday, Nov. 23, 2015. The Belgian capital Brussels has entered its third day of lockdown, with schools and underground transport shut and more than 1,000 security personnel deployed across the country. (AP Photo/Virginia Mayo)

In France, police said an explosive belt had been found in the southern Paris suburb of Montrouge. A police official, who couldn't be named because he wasn't authorized to discuss the investigation, said the belt was found without a detonator by a street cleaner in a pile of rubble Monday and was being analyzed by police.

Belgian Prime Minister Charles Michel said the country's capital, which also houses the headquarters of the European Union and NATO, faced a "serious and imminent" threat of attack, while the rest of the nation would stay at the second-highest level. The country's crisis center said the alert level would only change this week if a significant breakthrough by investigators warranted it.

The increased security measures in the wake of the Nov. 13 Paris attacks that killed 130 people and wounded hundreds have virtually shut down the city, with the subway and shops closed over the weekend and schools remaining shut on Monday. Michel said that despite the alert level, schools and the subway system would reopen progressively as of Wednesday.

"We are very alert and call for caution," Michel said. "The potential targets remain the same; shopping centers and shopping streets and public transport."

"We want to return to a normal way of life as quickly as possible."

The unprecedented security measures come as authorities hunt for one or more suspected extremists, including Salah Abdeslam, a fugitive since being named as a suspect in the Paris attacks. He has yet to be found.

Belgian authorities arrested a suspect on terrorism related charges Monday after a series of raids that saw 21 people detained between Sunday night and midday Monday.

The federal prosecutor said the suspect, who was not identified, was charged with terrorism offences related to the Paris attacks after authorities detained 16 people Sunday. Three others were charged with similar offenses last week. The other 15 people detained Sunday evening were released.

Earlier in the day, British Prime Minister David Cameron said in Paris that he will ask for parliamentary approval for the U.K. to join airstrikes against Islamic State extremists in Syria. If approved, Britain would join other nations carrying out bombings in Syria, including the U.S., France and Russia.

Cameron and French President Francois Hollande paid a quiet visit to the Bataclan concert venue, which saw the worst of the carnage in Paris. Hollande plans to meet Tuesday with President Barack Obama, then Wednesday with German Chancellor Angela Merkel and with Russian President Vladimir Putin on Thursday in pursuit of a unified strategy in Syria.

France's Defense Ministry said it had launched its first airstrikes from the Charles de Gaulle aircraft carrier, bombing IS targets in the Iraqi cities of Ramadi and Mosul in a seven-hour operation. The ministry said that four Rafale fighter jets were sent from the carrier on Monday afternoon, with two each flying over each city. France has already carried out strikes against IS targets in Syria.

Britain has been carrying out airstrikes in Iraq, but Cameron has long wished for an expanded mandate to include targets in Syria. But having lost a vote once two years ago, his government had been reluctant to even suggest a vote until it could be certain it would win.

Frank Foley, lecturer in war studies at King's College London and a terrorism expert, said it was difficult to know if what Belgium was doing was justified because authorities have provided so few details about their decision.

The measures intended to avoid attacks similar to the ones that caused devastating carnage in Paris could even be counterproductive if they last too long, he said.

"If these dramatic measures continue in Brussels, we will be doing the terrorists' job for them," Foley said. "The government may be unintentionally contributing to the atmosphere of fear."

But Henry Willis, director of RAND Homeland Security and Defense Center, likened the clampdown to the reaction of U.S. authorities after the Boston marathon bombing.

"They did shut down the city for a couple of days and when they lifted those restrictions, that's when they caught the terrorist," he said.

Several of the Paris attackers had lived in Brussels, including Abdelhamid Abaaoud, the man who authorities say orchestrated the plot. He was killed Wednesday in a standoff with French police.

French police issued a new public appeal for help in identifying the third attacker who was killed in the assault at the national stadium. They posted a photo of the man on Twitter Sunday asking the public for information.

Greek police confirmed that the man posed as an asylum seeker before the carnage. Public Order Minister Nikos Toskas said the man traveled to the island of Leros on Oct. 3, but he gave no further details.

Two senior Greek law enforcement officials told The Associated Press that the man traveled with another attacker identified as Ahmad Al Mohammad. Both men were rescued by the Greek coast guard while traveling from nearby Turkey on a boat carrying nearly 200 migrants and refugees that sank before reaching Greece. The officials requested anonymity because they weren't authorized to speak to the media.

France has extended a state of emergency which allows police raids, searches and house arrest without permission from a judge, for three months. On Saturday, it also extended a ban on demonstrations and other gatherings through Nov. 30, when a U.N. climate conference with more than 100 heads of state is scheduled to start.

The Islamic State group has claimed responsibility for Paris attacks; the suicide bombings in Beirut that killed 43 people and injured more than 200; and the downing of the Russian jetliner carrying 224 people in Egypt's Sinai Peninsula. All happened within the past month.