Advocating Being a Better American Abroad

The situations surrounding Ryan Lochte and Otto Warmbier's behavior point to larger trend of Americans garnering a reputation worldwide for being bad tourists. It's time for a change.

The story is familiar: college students and recent graduates, often armed with mom and dad's credit card for "emergencies," travel abroad, drinking to excess, participating in pseudo-illegal or embarrassing behavior, and flying back home to share their stories on social media.

While the facts surrounding what actually took place at that gas station outside of Rio de Janeiro have changed dramatically, there is little doubt that Ryan Lochte’s behavior during the event and afterward further emphasize a recklessness and rowdiness of Americans abroad that instills a particular reputation round the world.

The news story has all the makings of a learning experience for Americans. While easy to box the situation behind words of privilege, elitism, or immaturity, the broader truth is that many Americans who travel abroad carry a justified pride in America, but create a broader problem for our people internationally when that pride transcends into illusory arrogance. 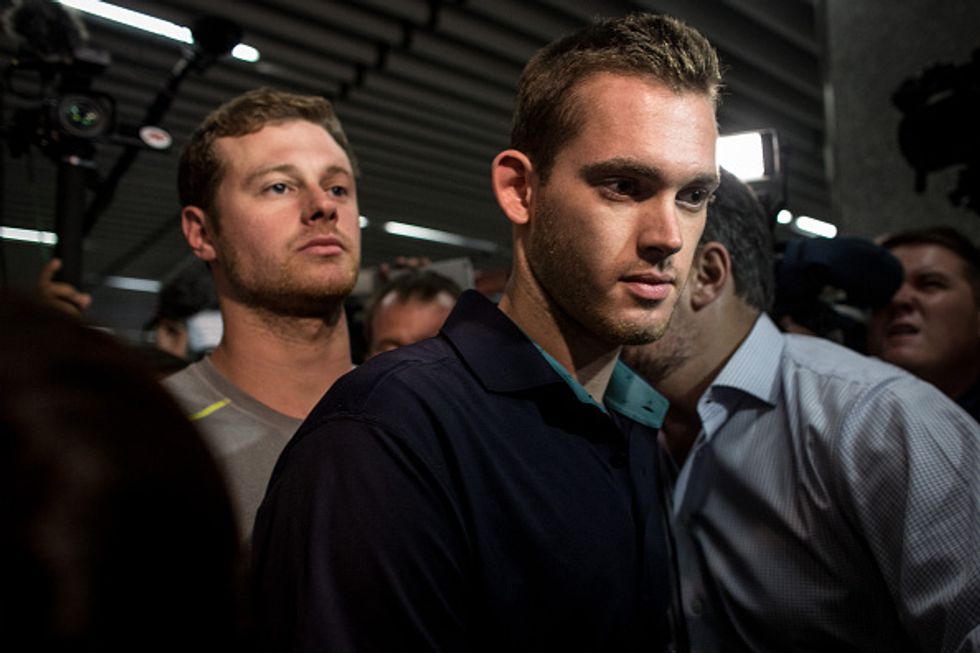 U.S Olympic swimmers Gunnar Bentz and Jack Conger leave the police headquarters at International departures of Rio de Janiero's Galeo International airport on August 18, 2016 in Rio de Janiero, Brazil. The swimmers were removed from their flight departing for the United States by Brazilian authorities to give more information about a reported armed robbery earlier in the week which included fellow U.S swimmers Ryan Lochte and James Feign. (Photo by Chris McGrath/Getty Images)

Other countries have made significant efforts to socially police their people. In 2014, People’s Republic of China President Xi Jinping criticized the way that many Chinese conduct themselves overseas. Over several years now, international newspapers have been largely critical of Chinese tourists for their “boorish” behavior and flagrant disregard for cleanliness of local communities and apparent disrespect for a home country's monuments and property. If the Chinese are the litterers of the world, Americans are the worlds rowdy neighbor who comes over to borrow a bottle of ketchup but stays for a week to get drunk and pee on your garden gnome outside.

The metaphor is not that drastic in light of Ryan Lochte's behavior in Rio. Families wealthy enough to send American young people abroad generally have the wherewithal to bail their “kids” out of trouble as evidenced by the $10,000 “fine” (read: bribe) to get the three U.S. swimmers out of a jam. According to the U.S. Department of Commerce, as of March, over 7.5 million Americans have traveled internationally in 2016 alone.

In just that short time frame, two headline grabbing incidents involving American tourists showing blatant disregard for local customs and laws have surfaced. Ryan Lochte is the most recent example of an American tourist thinking that a locked bathroom door abroad means that urinating on the building is probably acceptable behavior and breaking a sign is "ok." The second example is of University of Virginia student Otto Warmbier detained and sentenced to 15 years of hard labor in North Korea for the “hostile act” of stealing a propaganda poster in a Pyongyang hotel.

While on their face, shrugging off a stolen poster or public urination or a broken sign may be relatively easy on the scale of all crimes. The simple fact is that they are both acts of vandalism and the reason that we shrug them off is because they happened abroad. Defacing a mosque or destroying a Trump yard sign produces a degree of local outcry, but abroad there is collective apathy.

To correct course, there must be a dramatic change in the “ugly American” persona garnered abroad. As the quip often goes: seek to understand rather than be understood. As well we must seek to engage with the local culture abroad rather than appropriate it. While equipped with the knowledge of the strength and freedoms that America provides, a host country’s sovereignty controls when we are guests. And finally, learning from the culture and people of our fellow world citizen cultivates a knowledge that makes each of us renewed when we return to the United States.

For years, American tourists have been carrying the mantel of the greatest country in the world and dropping it. It’s time that we embrace and embody the gravitas, humility, and respect that this notation carries with it.

Tyler Grant is a law student at University of Virginia School of Law. He is a graduate of Washington and Lee University. Contact him at tgg9fc@virginia.edu.