America's bloodiest day was Sept. 17, 1862 at the Battle of Antietam. Taking place exactly 75 years after the adoption of the Constitution, the horrors led to emancipation for millions of Americans and thus it is one of our most sublime dates.

In Western Maryland is a creek called the Antietam.

The scene is pastoral with rolling hills and farms dotted by occasional patches of woods. Nestled within these gentle ridges is the tiny hamlet of Sharpsburg. Stone monuments and bronze tablets dot the landscape. They seem strangely out of place here. Only some extraordinary event can explain their presence.

Confederate Gen. Robert E. Lee’s Army of Northern Virginia was invading the North for the first time. The Union Army of the Potomac under Maj. Gen. George B. McClellan was out to stop them.

On Sept. 17, 1862 the two forces fought the Battle of Antietam to decide the issue. 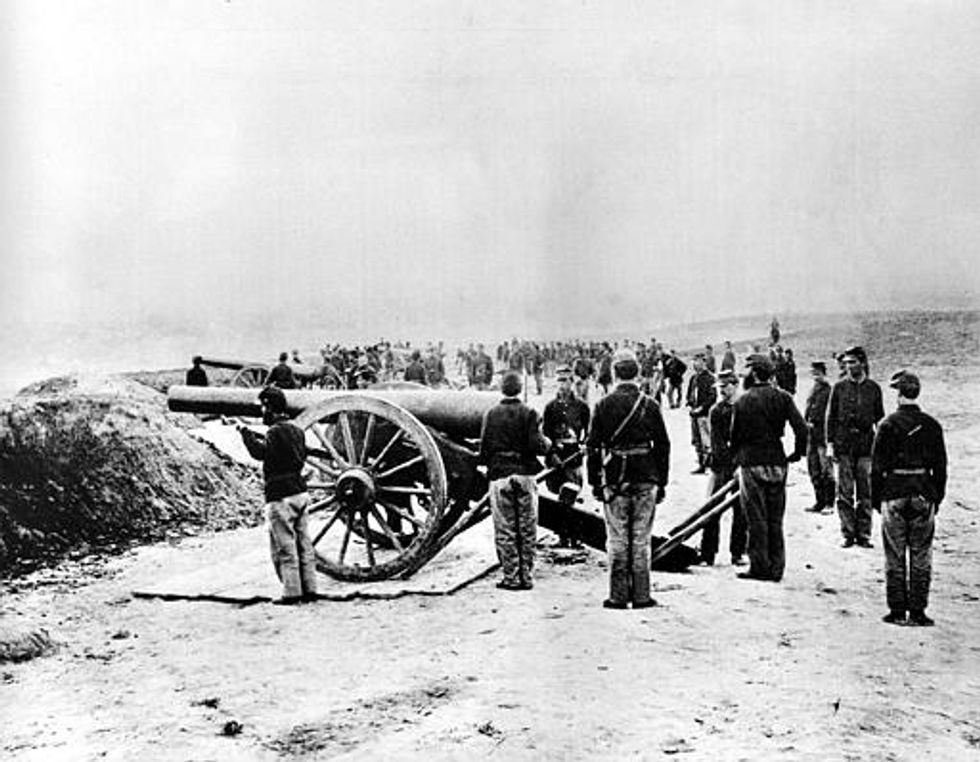 Their violent conflict shattered the quiet of Maryland ‘s countryside. When the hot September sun finally set upon the devastated battlefield, some 23,000 Americans had fallen--over seven times the number lost on Omaha Beach. This single fact, with the heroism and suffering it implies, gives the markers and monuments their meaning. No longer do they presume upon the land, rather their mute inadequacy can only hint at the great event that happened here–and of its even greater consequences.

To comprehend just how terrible the slaughter was this day, we must consider that, though McClellan brought a host of 87,000 men to the battlefield to confront Lee’s mere 38,000 depleted ranks (from desertion or straggling), the Union commander only committed 50,000 of his men to battle. So the nearly 23,000 losses in one day — roughly 12,400 Union and 10,300 Confederates — represented one out of every four men engaged. Thousands of those listed as wounded on September 17 would die of subsequent infections. Civilians also suffered as their livestock was driven off, their fields ruined and their barns and farmhouses ransacked or even burned down.

The consequences of this battle were as monumental as the scale of the losses suffered. Although tactically the battle was a draw as Lee did hold the field when merciful darkness finally arrived to put an end to the killing, it was clear his grievously wounded army would have to abandon the invasion and limp back into Virginia. McClellan could claim a victory in that he ended Lee’s northern incursion.

But an abler general with his vast uncommitted reserves would have broken Lee’s army against the banks of the swollen Potomac River at its back and ended the war.

Still the appearance of victory had far-reaching effects in the North’s favor.

Throughout the summer of 1862 President Abraham Lincoln, seeing the war in a higher moral and broader political vision than merely putting down an insurrection, was anxious to announce his preliminary Emancipation Proclamation.

Secretary of State William Seward, however, dissuaded him from doing so while the Union armies were being trounced by the Rebels on the battlefields of both the Eastern and Western theaters, fearing it would appear to the world as “the last shriek on the retreat.”

So Lincoln impatiently waited for a victory. It finally arrived on September 17.

Antietam gave Lincoln the platform upon which to transform the war from a war against rebellion to a war against slavery–in short, declaring in a proclamation what the fighting had always been about…the vocal objections of some libertarians, rogue historians, Lew Rockwell acolytes and Lost Causers notwithstanding.

Regardless of Lincoln’s motives behind emancipation, which ranged from moral enlightenment to political opportunism, the beginning of the end of the great crime of slavery and that “new birth of freedom” about which he would speak fourteen months later, can be traced back to that brutal September day. That the battle occurred on the 75th anniversary of the signing of the U.S. Constitution that codified Blacks as a mere three-fifths of a person makes the date both one of those eerie coincidences of history and that much more significant.

Antietam for all practical purposes ended the very real possibility of England and even France intervening on the side of the Confederacy; these prospects were never so strong as in the summer of 1862. But Lee’s elusive quest for the South's own version of Saratoga went unfulfilled that summer; they were finally dashed completely upon the fields of Gettysburg the following July.

The battle also brought to the North the first photographed images of the carnage of war. No colorful and stylized lithographs, but rather Matthew Brady’s New York City exhibit of photos of the battle’s aftermath which he simply called “The Dead Of Antietam.” Brady’s images, it was said, was as if he’d laid the corpses at the doorstep of every isolated civilian’s home, confronting them with the gruesome harvest of the modern battlefield.

Although bloody setbacks awaited them at Fredericksburg and Chancellorsville, Antietam showed the men of the Army of the Potomac, indeed Lincoln himself, that they could fight with the mettle of their vaunted Southern opponents. The seeds of victory at Gettysburg and beyond were sown on the fields around Sharpsburg. It would only take proper leadership for the Union army to eventually prevail. When asked by a slave woman in Sharpsburg after the battle if he’d had a hard fight, a Rebel soldier replied: “Yes Aunty. The Yankees gave us the devil today. And they’ll give us hell tomorrow.”

But that tomorrow never came. Despite his army’s battered condition, Lee chose to remain on the smoldering field on the 18th, defying his opponent across the creek to renew the assault. But McClellan was no Grant. Content with not losing, McClellan idled away the hours and eventually the day. That night Lee's army escaped back across the Potomac River to live to fight another day.

Lee’s most reliable general, James Longstreet, noted that at one point during the battle the situation for the Rebs was so precarious that in the height of the fighting, with his lines in disarray and fresh battalions of blue troops clearly visible on the bluffs east of the creek, he personally minded his staff’s horses so they could serve an artillery piece. His artillerist, E.P. Alexander, would write: “Lee’s army was ruined and the end of the Confederacy was in sight.” But it would not end that day. Because of the hopelessly timid George McClellan, Antietam was the great missed opportunity to end the war.

In a way the sportsman in me likes the notion that the battle was a draw, given the astounding bravery and suffering on both sides. The South’s survival that day ultimately can be attributed to the exceptional skills of its high command: General Lee, and his two corps commanders, Generals Thomas J. "Stonewall" Jackson and Longstreet, as well as hard-driving division leaders like A.P. Hill, who force-marched his division seventeen miles in under seven hours to arrive on the field just in time to smash the final Union drive to break the Southern lines.

In hindsight, Lee should not have stood and fought at Sharpsburg. He was outnumbered, his army exhausted, and his back to a river. He had little to gain and everything to lose. But for his opponent being the hopelessly outclassed George McClellan he probably would not have offered battle. Yet once the fight was joined, Lee calmly moved units back and forth across the battlefield like a chess master, stripping the quiet sectors of troops and shifting them to the hotspots like the Dunker Church, Miller Cornfield or Sunken Road thereby achieving local superiority in numbers despite his overall 2:1 disadvantage. McClellan conveniently obliged Lee's tactics by attacking one division at a time piecemeal, or as one disgruntled Union officer said, "in driblets." Thus did the battle roll from one murderous sector to the next, producing scenes of methodical horror that lasted from the very first light to sundown and giving us the bloodiest single day in American history.

But Lee's efforts in Maryland and elsewhere would not be enough to stave off the inevitable that finally came to pass in April 1865. The South was never going to win the Civil War. That it did not end in September 1862 is a tragedy equal to the story of the Battle of Antietam itself considering the casualty lists of the next two and a half years. But I like to think the legacy of generations of free men and women, whose chains began to dissolve that decisive summer day, gives the 23,000 dead and wounded sublime meaning for us all.

Brad Schaeffer is an energy broker, columnist, historian and author. Drop him a note at: shafemans@yahoo.com