First son-in-law Jared Kushner sat down with Axios' Jonathan Swan for a rare interview, which posted Monday night. He appeared unprepared for — and extremely uncomfortable with — questions about his wife's father's birtherism and about bigotry against Muslims.

Swan began by citing New York Democratic Rep. Alexandria Ocasio-Cortez's repeated — and unoriginal — claims that President Donald Trump is racist. He then asked if Kushner if he had ever seen or heard the president do or say anything racist or bigoted.

Kushner made it clear that his father-in-law has never been a racist and that the claims of Trump's racism didn't start until the real estate magnate ran for president in 2016: "You can't not be a racist for 69 years then run for president and be a racist."

After that things got awkward — like, "The Office"-level awkward.

Swan next asked, "Was birtherism racist?" — referring to claims that former President Barack Obama was not born in the U.S. and, therefore, should not have been eligible to be president. Though Trump did not start the birther movement — it was started by a group of Hillary Clinton supporters called the PUMAs (Party Unity My Ass) who refused to get behind Obama after the nasty 2008 Democratic primaries — he was one birtherism's chief proponents.

Kushner answered, "Um. Look, I wasn't really involved in that."

Swan replied, "I know you weren't. Was it racist?"

Kushner repeated, "Like I said, I wasn't involved in that."

Undeterred, Swan asked again, "I know you weren't. Was it racist?"

Kushner then shot a quick look to the camera, ala Michael Scott: 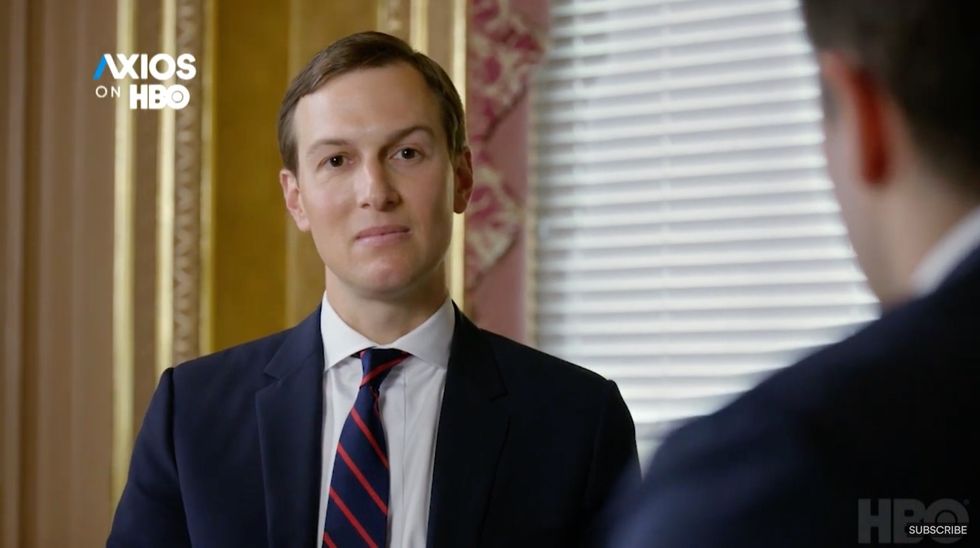 He answered again, "Look, I know who the president is, and I've not seen anything in him that is racist. So, again, I was not involved in that."

Swan then asked, "Did you wish he didn't do that?"

Repeating his lack of involvement, Kushner merely stated, "That was a long time ago."

Swan then shifted to the president's call for a "Muslim ban" during the 2016 campaign.

The president issued a statement Dec. 7, 2015, during a campaign rally in Mount Pleasant, South Carolina: "Donald J. Trump is calling for a complete shutdown of Muslims entering the United States until our country's representatives can figure out what the hell is going on. We have no choice."

Was Trump's call for a "ban" during the campaign "religiously bigoted," Swan wanted to know.

After Kushner tried to play it off with a version of "well, that's just Trump being Trump," Swan asked if he wished the president hadn't made that 2015 speech.

Kushner again awkwardly avoided the question and just lauded the "great things" Trump is doing for the country.

What was never explained in this clip — or the full interview — was why Kushner, who is almost never interviewed, would agree to sit down with Swan for this one (though Allahpundit over at HotAir has a couple ideas if you're interested).

No Trump tweets yet about this cringe-worthy episode.