"The main use for this is for kids who were born without nerves to the ears."

When Tommy and Danielle Moran's son was born profoundly deaf, they, like many parents in their situation, learned sign language and looked into having a cochlear implant.

And while Caiden now has a device implanted on the outside and inside of his head that looks very much like a cochlear implant, it's something a bit different. 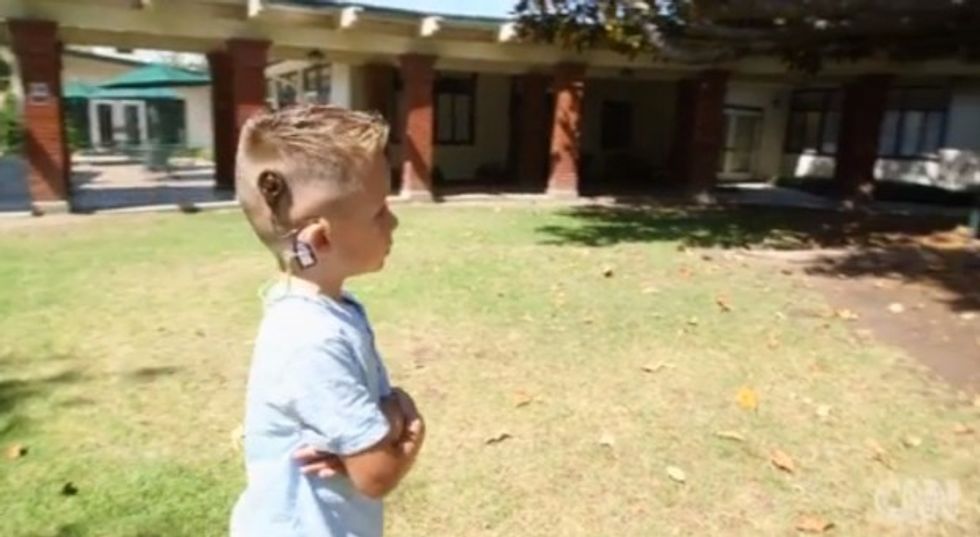 His parents learned that a cochlear implant would not help their son Caiden because he was missing the sensory organ (cochleas) inside his head that this device connects to, allowing its wearers to receive a "representation of sounds in the environment."

Danielle Moran told CNN's Vital Signs that she was talking to a friend who mentioned auditory brainstem implants, a device that bypasses the ear completely and is undergoing clinical trials in the U.S. currently, though other countries have been using them for years.

"The main use for this is for kids who were born without nerves to the ears," Dr. Mark Krieger, pediatric neurosurgeon at the Children's Hospital in Los Angeles, told CNN. "So I like calling it a bionic ear."

An electrode is implanted on the brainstem, which stimulates auditory neurons when sound is picked up by an externally placed microphone. As CNN puts it, the ABI "[bypasses] the inner ear completely."

In young children, Krieger told CNN, the brain "is able to grow and develop around this implant." 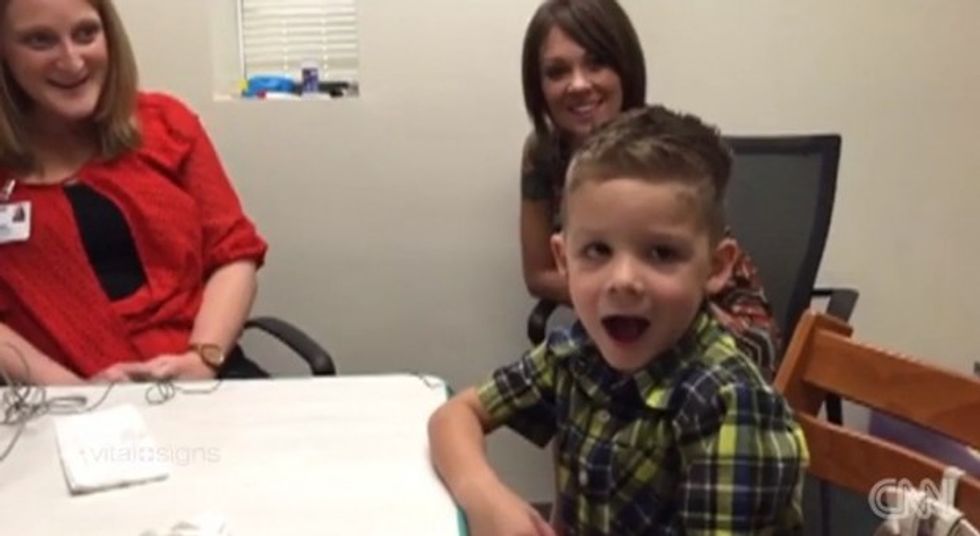 Caiden was the fourth patient chosen for the trial — the only one supported by the National Institutes of Health for ABIs in the U.S. — and in January 2015, he had the brain surgery to implant the electrode. His device was turned on in March.

Even though just five years old, as CNN pointed out, Caiden has spent his entire life without hearing anything. With the device turned on, he now has to train his brain to understand and interpret the sounds around him.

Audiologist Margaret Winter, who works with Caiden said that just as with babies repeating and learning certain sounds and eventually developing those into words, the same is done with patients who receive ABIs or other hearing devices like cochlear implants.

Auguste Majkowski, a 3-year-old Canadian boy, was the first child in the NIH/USC study undergo surgery for an ABI and the University of Southern California reported successfully turning on the implant in June 2014.

"It was magical," Auguste's mother, Sophie Gareau, told the university's news service at the time. "He’s a tough kid."

The trial involves 10 children between the ages of 2 and 5 years old who will be studied for three years to establish safety procedures and quantify its efficacy with the hope of the surgery as a whole becoming approved in the U.S. According to the university, the surgery is currently approved in the U.S. for patients 12 years and older with neurofibromatosis type II.

"When a child is born, their ear is hard-wired for sound but the brain has to learn how to perceive sound and speech from the information coming up the hearing pathway," trial investigator Dr. Robert Shannon told the university at the time of Auguste's success. "If the ear is not providing sound information to the brain, the hearing part of the brain doesn’t develop properly. The ABI provides sound to these pathways so they grow and develop with the child."

Watch this video from the university showing 3-year-old Angelica who received the device:

This story has been updated to correct that this research is the only one in the U.S. supported by the NIH not the FDA as originally stated. There are other ABI clinical trials with FDA approval.